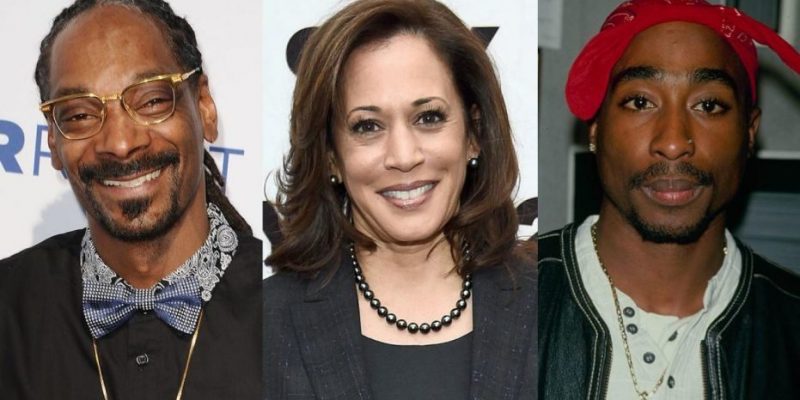 U.S. Senator and 2020 presidential candidate Kamala Harris (D-CA) got herself into some trouble during a radio interview with “The Breakfast Club”.

When asked about rumors that she opposed legalizing marijuana she replied, “Half of my family is from Jamaica, are you kidding me? I believe we need to legalize marijuana.”

Harris told host Charlemagne that she smoked in High School and College. “I did inhale,” she joked.

Charlamagne asked Harris, “What was you listening to when you was high? What was on? What song was on?” she replied, “Definitely Snoop, 2Pac for sure.”

The problem with that is that neither Snoop Dogg nor Tupac Shakur had released their first albums by the time she graduated.

The latest she could have been referring to is law school where she graduated in 1989, still before either of the artists hit the big screen.

So it does appear that the 2020 hopeful may have lied or embellished this story in an attempt to solicit  support from the hip-hop community. Whether it was intentional or unintentional, the mistake will likely have the exact opposite effect that she was hoping for.

None of the radio show hosts caught the gaffe and Sen. Kamala Harris has not yet replied to media requests for comment.

Later in the day, Sen. Harris repeated her position on marijuana via social media:

“Let me be clear: it’s time we legalized marijuana at the federal level,” Harris tweeted. “Marijuana laws are not applied or enforced in the same way for all Americans, many whose lives have been ruined by these regressive policies. We must change the system.”

When Harris’ father, Donald Harris, heard about her comments, he vocally disagreed and was actually offended by one comment in particular:

“My dear departed grandmothers … as well as my deceased parents, must be turning in their grave right now to see their family’s name, reputation and proud Jamaican identity being connected, in any way, jokingly or not, with the fraudulent stereotype of a pot-smoking joy seeker and in the pursuit of identity politics.”

“Speaking for myself and my immediate Jamaican family, we wish to categorically dissociate ourselves from this travesty.”

Interested in more national news? We've got you covered! See More National News
Previous Article Up To 35K Rally For Trump, No More Than 7K For Beto
Next Article Louisiana has three income tax brackets, with the top income threshold reaching $50,000