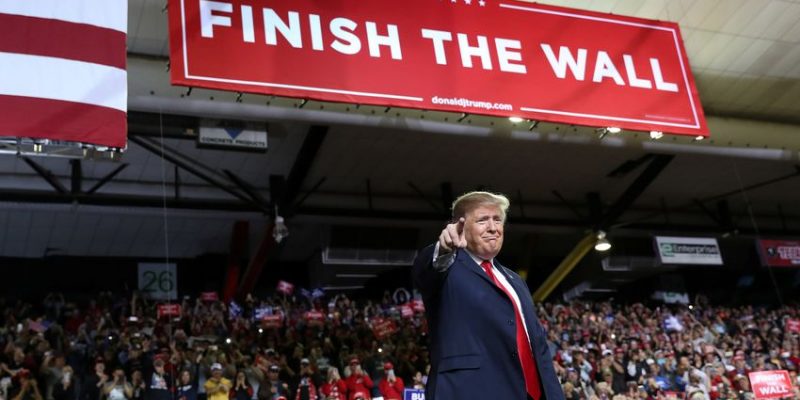 (El Paso, Texas) – President Donald Trump held a rally yesterday just miles from the US-Mexico Border with estimates that up to 35,000 supporters were in attendance.

The President was warmly welcomed by a packed house in as he walked out to the popular song “God Bless the USA”.

A giant American flag graced the stage as usual but instead of “promises made promises kept”, both sides of the flag read “FINISH THE WALL”.

The President began his speech, “I am very, very thrilled to be here in the great State of Texas. I don’t know if you’ve heard but today we started a big, beautiful wall right on the Rio Grande… I love this state and I love the people of this state… Since taking office 2 years ago, our economy is now the hottest economy anywhere on Earth.”

President Trump declared that America’s military is “more powerful than ever before”:

“America is winning again, isn’t that nice?” he asked the cheering crowd.

The 45th President joked about Beto O’Rourke’s loss to Ted Cruz and had no advantage other than a good first name, teasing him over his crowd size:

Politico claims that O’Rourke had up to 7 or 8 thousand. He should have, he’s from El Paso after all. The former city councilman is still being considered a potential presidential candidate.

Most analysts agree that this was, for all intents and purposes, President Trump’s re-election kickoff rally followed by another one in Florida.

The President went through a long list of accomplishments including:

“The unemployment rates for African-Americans, Hispanic-Americans and Asian-Americans have reached the lowest level in the history of our country… And women have fulfilled almost 60% of the new jobs created last year.” – President Trump