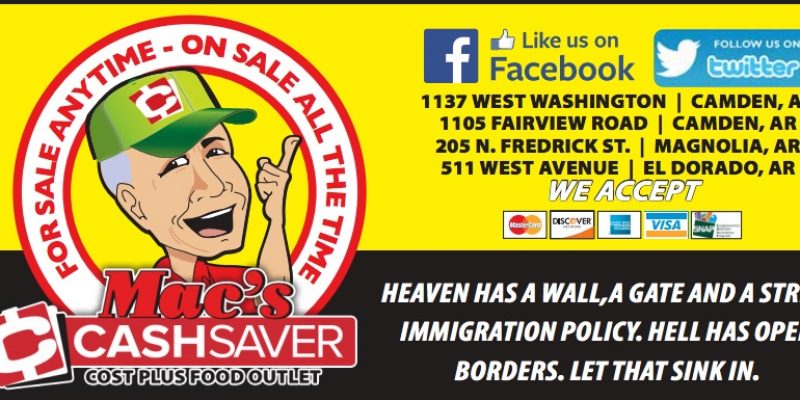 Mac’s Fresh Market, a small grocery store chain with locations in Louisiana, Arkansas, and Mississippi, published a message in its weekly deals advertisement. Its owner inserted on the front page of the ad:

“Heaven has a wall, a gate and a strict immigration policy. Hell has open borders. Let that sink in.”

Store owner Reggie McDaniel told KALB News in Alexandria, Louisiana, that the message was rooted in his faith. He said, “If I used a political message and I’m very aware it’s political, to highlight Jesus Christ, then I’m guilty of it.” He said his only regret was not publishing John 3:16.

The Mac’s Cashsaver ad was distributed in the Arkansas cities of Camden, Magnolia and El Dorado, and in northern Louisiana.

The company describes itself as family-owned and Christian, and McDaniel said he was prepared for some of the backlash and criticism his store would receive. He clarified by saying:

“That’s my meaning of the whole thing is are people prepared to go to heaven or are they not,” McDaniel said. “I thought it was a perfect time because everybody is talking about the border, some people want it, some don’t want us to have one.”

The company told Little Rock television station KARK that it stands by the ad and will continue to put out messages each week.

Jack Digby, the manager at Mac’s Cash Saver in Camden, Arkansas, told KARK of the naysayers, “They’re just making a political spin out of it and getting the wrong idea of what it really means,” he said. “I am for this company and I am for God. There’s nothing wrong with what that statement says.”

McDaniel asserts that in America, people “have the privilege of shopping where they want to,” and he appreciates their business.

Benjamin Joyner, one of McDaniel’s defenders, said on Facebook that no hate was implied in the grocer’s message. He wrote: “The gates and wall of heaven are the Blood of Jesus Christ. “No one enters there illegally, except according to His Law, by accepting Jesus Christ as Lord.”

“A wall along our southern border should bear the same, barring those who would enter illegally our country, and allowing all who would enter legally according to the Law of the Land.”

For the Biblical reference, Jesus is the gate to heaven:

John 14:6: Jesus said to him, “I am the way, and the truth, and the life. No one comes to the Father except through me.”

Matthew 7:13: “Enter by the narrow gate. For the gate is wide and the way is easy that leads to destruction, and those who enter by it are many.”

John 3:16: “For God so loved the world, that he gave his only Son, that whoever believes in him should not perish but have eternal life.”

Romans 10:9: “Because, if you confess with your mouth that Jesus is Lord and believe in your heart that God raised him from the dead, you will be saved.”

Revelation 21:11-27 describes heaven, and its gates and wall:

It shone with the glory of God, and its brilliance was like that of a very precious jewel, like a jasper, clear as crystal.It had a great, high wall with twelve gates, and with twelve angels at the gates. On the gates were written the names of the twelve tribes of Israel.

There were three gates on the east, three on the north, three on the south and three on the west.The wall of the city had twelve foundations, and on them were the names of the twelve apostles of the Lamb. The angel who talked with me had a measuring rod of gold to measure the city, its gates and its walls.

The city was laid out like a square, as long as it was wide. He measured the city with the rod and found it to be 12,000 stadia in length, and as wide and high as it is long.The angel measured the wall using human measurement, and it was 144 cubits thick.

The wall was made of jasper, and the city of pure gold, as pure as glass.The foundations of the city walls were decorated with every kind of precious stone. The first foundation was jasper, the second sapphire, the third agate, the fourth emerald, the fifth onyx, the sixth ruby, the seventh chrysolite, the eighth beryl, the ninth topaz, the tenth turquoise, the eleventh jacinth, and the twelfth amethyst.

The twelve gates were twelve pearls, each gate made of a single pearl. The great street of the city was of gold, as pure as transparent glass. I did not see a temple in the city, because the Lord God Almighty and the Lamb are its temple.

The city does not need the sun or the moon to shine on it, for the glory of God gives it light, and the Lamb is its lamp.The nations will walk by its light, and the kings of the earth will bring their splendor into it. On no day will its gates ever be shut, for there will be no night there.The glory and honor of the nations will be brought into it.

Nothing impure will ever enter it, nor will anyone who does what is shameful or deceitful, but only those whose names are written in the Lamb’s book of life.

Interested in more national news? We've got you covered! See More National News
Previous Article Fake news lies about Beto/Trump rallies in El Paso easily disproved by photos, videos
Next Article Up To 35K Rally For Trump, No More Than 7K For Beto