…and the petition to incorporate that city of some 85,000 people in the unincorporated area of East Baton Rouge Parish south of Baton Rouge proper will now go to the ballot. At least, that’s pending what are likely a raft of dilatory lawsuits aimed at strangling the St. George incorporation short of an election.

Which is an argument for another time. For now, St. George needed 12,996 signatures to get 1/4th of the registered voters in the area to be incorporated, and got 14,585.

The proponents pushing the creation of the new city of St. George has secured the signatures they need to get the measure on the ballot, Registrar Steve Raborn announced today.

According to a signed statement Raborn released through the state’s Attorney General’s Office, 14,585 signatures from registered voters living within the boundaries of the proposed city were accepted and verified by his office from the petition proponents submitted Oct. 15. 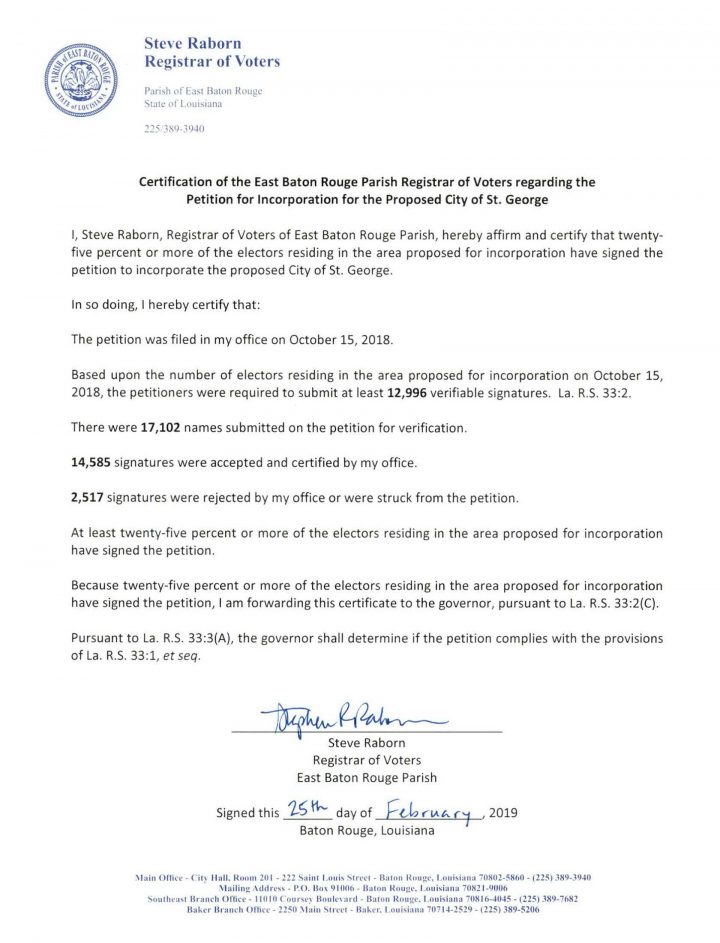 And here was the St. George committee’s announcement…

The next step is for Gov. John Bel Edwards to call the election, which could come as early as May but is a lot more likely to be held this fall – either amid the statewide primary in October or runoff in November. Whatever Edwards does, though, it’s likely to be challenged in court by the various status quo players in Baton Rouge.

Raborn’s certification is actually a long time in coming. The petition was turned in all the way back in October, and the registrar has been in no particular hurry to process it – first using the fall elections as a reason he couldn’t turn it around, then the Christmas and New Years’ holidays. We’re told the St. George folks started making a little bit of a stink about the slow movement on the petition around the end of January, and Raborn responded that he finally had manpower available to process it about two weeks ago. So it isn’t a surprise it came in today.

The one real takeaway from St. George’s success this time as opposed to in 2016 when the first petition to incorporate the proposed city circulated is that the St. George map is different, and smarter. The initial plan was to incorporate virtually all of East Baton Rouge Parish south of the city proper, which would have been a city of some 107,000 people. There were some significant swaths of that area where virtually no one signed the first petition, and so when it was time for another bite at the apple the organizers shrank the area they were seeking to incorporate.

Meaning that the current St. George map would encompass a population of about 85,000 people, and the registered voter base of the new city is down to just below 52,000 as opposed to the nearly 70,000 registered voters in the first map. That took the needed signatures from the 17,000 range down to 12,996 without losing very many actual signatories to the petition at all.

When the current map was released, it was panned as an example of “racism” among the St. George organizers because the areas cut out are mostly majority-black areas. But given that those are the areas where almost nobody signed the petition one could make the argument they were heeding public sentiment and not asking people in, for example, the Gardere area to do something they clearly didn’t want to.

That’s worth remembering if one of the lawsuits sure to be filed in an attempt to stop St. George from going on the ballot is that the proposed city is disproportionately white.