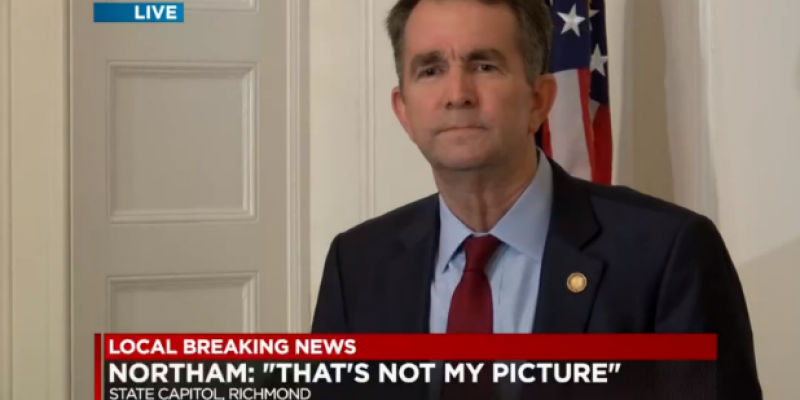 The day after publicly apologizing over a racially-charged college-era photo, Virginia Governor Ralph Northam says he is not either of the men shown.

“I believe now and then that I am not either of the people in this photo. This was not me in that picture. That was not Ralph Northam,” the Governor told reporters.

After first apologizing, and appearing to accept wrongdoing, Governor Northam now claims that he is neither of the men depicted in the “clearly racist” yearbook photo.

More importantly, he is defying the loud and numerous calls for his immediate resignation, many which come from his own party.

Instead, he decided to tell a story about another time that same year that he did, in fact, dress up in blackface for a dance competition.. which he won.

“You said it was a dance competition? [Sic] And you danced the moonwalk? Are you still able to moonwalk?”, a reporter asked Northam.

It was at that moment that the First Lady of Virginia stole a precious moment of comic relief from America in order to save her husband from himself.

First appearing to look for a possible dance floor stage-right, Gov. Northam looked to his wife for direction who quickly said, “Inappropriate circumstances.”

The Governor smiled as if he would have loved to oblige but reiterated, “My wife says inappropriate circumstances.”

“I dressed up in a um, what’s his name? Michael Jackson. I had the shoes, I had the glove, I used a little bit of shoe polish to put on my cheeks,” Northam said.

The Governor vowed not to give in to calls for resignation, “I am simply asking for that ability to demonstrate that the person I was is not the man I am today. I am asking for the opportunity to earn your forgiveness… I intend to continue doing the business of Virginia.”

Democrat Governor Ralph Northam of Virginia just stated, “I believe that I am not either of the people in that photo.” This was 24 hours after apologizing for appearing in the picture and after making the most horrible statement on “super” late term abortion. Unforgivable!

The press conference was intended to “stop the bleeding” but just made matters worse. In fact, Virginia’s US Senators Tim Kaine and Mark Warner released a joint statement calling for Northam’s resignation citing the press conference as part of their logic:

“After we watched his press conference today, we called Governor Northam to tell him that we no longer believe he can effectively serve as Governor of Virginia and that he must resign. He should step down and allow the Commonwealth to begin healing.”