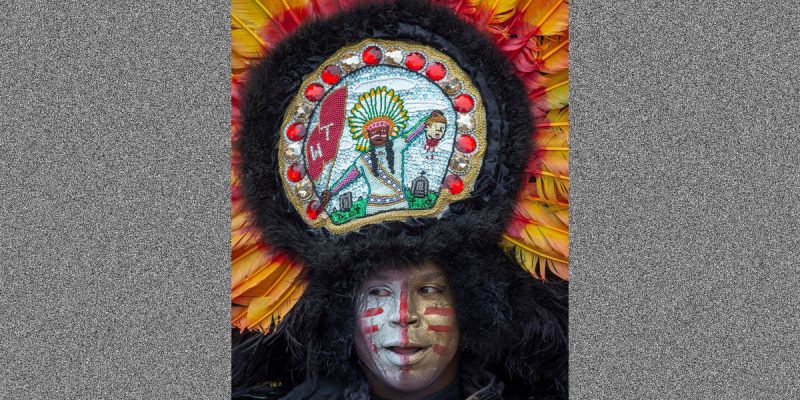 A man in a style of Mardi Gras attire wore a costume that depicted the beheading of a man of another race, and it received no attention, questioning, or criticism from news outlets or the political Left. The costume was shown off on March 17, Super Sunday, as tribes of Mardi Gras Indians paraded through New Orleans in homemade elaborate Native American-influenced costumes. The Times Picayune posted a picture of the racist artwork on their news blog.

A Mardi Gras Indian, with the letters WT likely representing the Wild Tchoupitoulas, wore a headdress with beaded artwork that showed an Indian raising the decapitated head of a white man with a bloody neck. This hatred was displayed publicly. A news photog from Times Picayune/Nola.com captured it. This wasn’t a bead of an historic Southern flag or a medallion of a removed iconic landmark. The New Orleans Fake News Media saw no issue with this. The Leftists have not condemned it.

Less than a month ago, in acts of despicable shame to carnival, several parading krewes publicly chastised riders for throws. The local media all jumped onboard the witch hunts trying to out the riders who threw the Forever Lee Circle beads, a mock yellow referee flag about the removed monuments, and a bead with a Confederate battle flag. The removed monuments and that flag have been lambasted as symbols of hatred. That’s one side. History and heritage are the other side, and the interpretation belongs to each individual. But now an unquestionable symbol of violence, the celebratory decapitation of a man, was covered up by local media. This is again why local news has dwindling credibility.

A request for explanation was submitted to several staff members at the Times Picayune. They have not responded.

The sad reality is many African Americans and Leftists think racism only exists when it’s directed toward black people, and Hispanics to a lesser extent. They laugh at the thought of calling race-based hate aimed at white people as “racism.” They think “Hate Crimes” are limited to white on black crimes only. That means this does not show up on their radar.

Racial hatred can be dangerous. The celebration of racial violence should be condemned by all, far and wide. The Left never applies standards evenly. The Left targets white people, more commonly white men, and attempts to diminish any of their accomplishments or successes. The goal being to remove white men from positions of power, whether public or private. The Left prefers to tear down than build up. And the media fuels the double standard.

If the racial roles were reversed, the Fake News and political Left would call not just for the firing of this costumed man from his regular job, but they would advocate for the boycotting of his business, as well as crying for the need to end the Mardi Gras Indian tradition altogether. Imagine the reaction if a white masker’s costume featured a white man hoisting a black man’s bloody head. It would be national news. The FBI would probably get involved.

Explore the concept of the Mardi Gras Indian tradition if these men were white. First, the name needs to go because “Indian” is offensive nomenclature. Second, someone may interpret the costuming as mocking Native American people and that is unacceptable. Third, this tradition segregates racially and that is certainly not OK in 2019.

The Times Picayune posted the picture on March 17th, and they removed it by March 19th. This is similar to when the New Orleans Fake News collectively covered up vandalism spray painted during an anti-Trump riot by not reporting to the people of New Orleans the messages from the Left of “Die Whites Die” and “Fuck White People.” The celebration of a decapitated white man was there, it was on display on Super Sunday, but since it doesn’t fit the anti-white agenda of the purveyors of Fake News, it’s been taken down.

The issue goes beyond the media covering it up. It’s the mentality. Now they’re likely thinking they made a mistake and betrayed the Wild Tchoupitoulas by even posting the picture. It’s selective reporting on divisive issues.

Interested in more news from Louisiana? We've got you covered! See More Louisiana News
Previous Article APPEL: On A Monumental Election
Next Article Trump Just Showed Ralph Abraham And Eddie Rispone How To Win On Medicaid