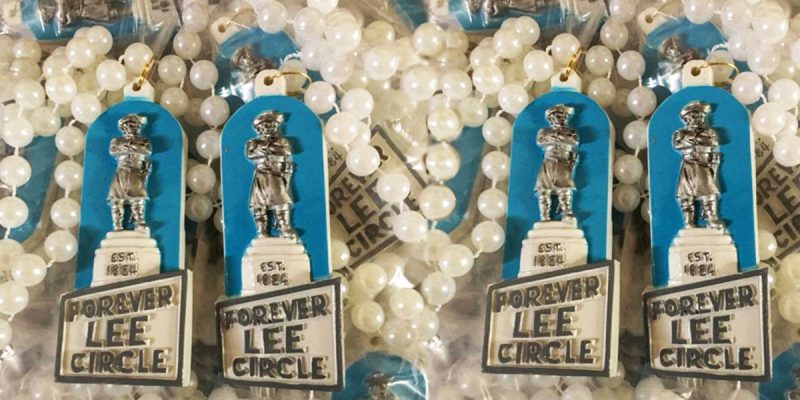 Carnival 2019 wrapped up with Mardi Gras last week and featured a few controversies that have become more common the past few years. Looking back on a very long season, one of the most notable social aspects that was billed as a “controversy” involved the throwing of Southern themed beads at a celebration in the…. Yes, in the South. Many fascinating conclusions can be drawn about the silliness of anyone letting carnival throws offend them, the hypocrisy of the response of some local krewes, and the fact that this, along with the other supposed “controversy” regarding Zulu’s century-long blackface tradition, brings into question how long the true spirit of carnival will exist.

As has been well documented, Mitch Landrieu and the City Council destroyed a portion of New Orleans culture with the removal of four monuments in 2017. All four were more than a century old, some of which were on the National Register of Historic Places, and all of which included design, construction, artistic taste, heroism, and materials of which the contemporary generation is incapable of replicating. In spite of the fact that the general public disagreed, the aggression from the out-of-state mainstream media and the worthlessness and lethargy of the Republican political apparatus allowed the removalists to find success.

Now to Mardi Gras. The aspect of carnival that allows Southern themed beads to be thrown is the basis of carnival itself: the transformative power of the mask. Masking may be the most important ingredient of carnival. It allows for mystery, mischief, and for the masker to be anyone or anything they choose to be for a brief while. If the biggest blowback from the iconoclasm forced on the local populace is the expression of this frustration during carnival, the politicians have frankly gotten off quite easily. Carnival has quite the history of broaching political, military, historic, and satirical themes.

During 2018, many of the newer, commercial, and out-of-town rider-friendly parading organizations issued statements condemning the throwing of beads that dared display the statuary of these West Point graduates or their banner. These organizations are quite large and their leaders must view their existence mainly as an opportunity for a flashy “drunk” without any appreciation for the true meaning of the celebration, nor allowing the riders who are spending thousands of dollars to participate in “wrong-think” artistic expression. With only a few instances of folks catching offending beads and taking to social media to complain last year, it seemed the issue would fade away.

Then came 2019. The Krewe of Freret—which ironically carries the last name of the heroic old Freret family that boasts both a mayor and his Confederate veteran son—banned a guest rider for throwing monument-themed beads. Next, Nyx and Thoth both jumped into the action. The Fake News of the Advocate failed to provide an accurate headline. A more fitting headline would have read: “Kansas Transplant Catches Beads He Doesn’t Like From Rider Who Spent Thousands of Dollars to Throw a Free Party for Transplant; Takes to Social Media to Complain.” Nyx’s witch hunt has reportedly not caught the alleged offender. Hopefully the search continues without result!

Thoth, unfortunately, resorted to the lowest of low comedies in this whole faux affair. Thoth said if the rider is identified, he “will be eliminated” from the krewe. “No one is in favor of this,” the Thoth spokesman said. “We are out there to have a good time. We are out there for a family event.”

After decrying the forbidden trinket thrower, the organization proceeded to hit rock bottom and dig deeper. Thoth implied that historical flags and beads are unfriendly to a family setting. First, Thoth was founded by Irish Channel neighborhood working class Orleanians in the 1940s. At that time the Irish Channel and its bars were all pro-South, and it is easy to speculate that Thoth’s founders would be ashamed that their organization would seek to be so insulting of the Southern heritage they loved. Second, the hypocrisy of saying monument or Confederate themed beads take away from the “family friendly” nature of a parade where riders are openly wearing and throwing beads with penises, breasts, and vulgar sayings is the height of ridiculousness. Thoth leadership should know better than to give legitimacy to the rhetoric and narrative that our history should be hidden. No one expects them to come out clad in Confederate gray and pro-monument, but the appropriate response would have been a) the organization has no comment, b) this is an internal matter of a private organization, c) the organization trusts riders to exercise good judgment in what they throw and will not interfere, or d) any combination of a-c. If the Thoth leadership thinks appeasing the media on this will somehow allow them to be left alone, they clearly haven’t been paying attention. Pandora’s Box has opened and more limitations will come along the route.

Lastly and most importantly, this whole charade teaches that today’s generations are not to be taken seriously. Some parades have members not masking, getting high, or throwing things that are unheard of anywhere in civil society. Families can’t even stand at the day parades without smelling weed the whole time. The lewd dress of the French Quarter carnival has crept onto the Avenue. Today’s society has by no means indicated it can police itself, celebrate in a respectable fashion, or appreciate ribbing on issues they find unpopular. The missing links parade of 1873 could just as accurately describe New Orleans’ transplants, hipsters, politicians, and some of the self-serving organizations leaders as it did the Reconstruction leaders of the 1800s.

Modern carnival was invented by Confederates, yet like much of New Orleans history, the influence of Secessionists has been publicly covered up. The originators didn’t see Southern imagery as contrary to the purpose of Mardi Gras as these Krewes claimed in 2018 and 2019 in an effort to avoid the reality that Mardi Gras parades are censoring their members. Today’s celebration dilutes the original carnival essence in order to shelter the heightened sensitivities of the 21st century’s snowflakes. The original Rex was a Confederate combat veteran who practiced Catholicism after converting from his ethnic Judaism. Many founding Krewes paraded in the early 1870’s under Union occupation. As the event grew, Confederate veterans marched in carnival parades, into their elder years, carrying Confederate flags, well into the 20th century. Instead of knowing history and understanding the reality, Krewes are acting like Reconstruction occupiers.

Lent has arrived and native New Orleanians have much to ponder and reflect on thinking about the condition of our celebration and what it says about 2019.

Interested in more news from Louisiana? We've got you covered! See More Louisiana News
Previous Article BAYHAM: When The PC Revolution Came To Treme
Next Article GURVICH: The ITEP Mess Is A Great Example Of JBE’s Mismanagement As Governor