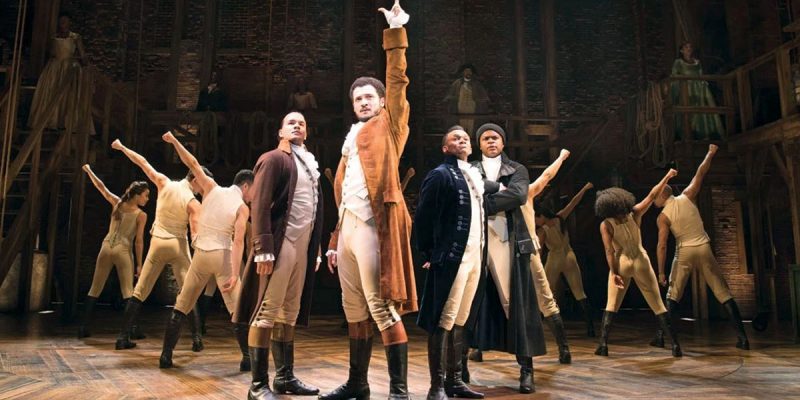 The Broadway smash musical Hamilton has deployed one of its touring productions in the Crescent City this week with the accolade-encrusted hit running at the Saenger until the end of the month.

The show about one of our lesser celebrated Founding Fathers has become a popular culture phenomenon, reinvigorating theatre and reintroduced the country’s first Secretary of the Treasury to America.

Tickets for the hot show created a lucrative scalping market, commanding Super Bowl-esque prices, and a cottage industry of professional line standers in NYC (for a local equivalent think of the folks who make serious cash loitering outside Galatoire’s around Christmas).

But would a conservative enjoy the show or walk away feeling insult to wallet and person?

The stars of Hamilton created this political antipathy via their on-stage lecture to then-Vice-President-elect Mike Pence and an infamous “want ad” for performers that essentially said “Whites Need Not Apply”.

And the man behind Hamilton, Lin-Manuel Miranda, was a vocal opponent of Donald Trump.

That said, let me offer the following thoughts.

First, I’ve seen Hamilton three times, twice on Broadway and once in London’s West End.  And while the shows weren’t cheap (I was fortunate in scoring far more reasonably  priced cancellation tickets), the dollars (and pound stirling) were well worth it.

Secondly, conservative friends who are far less patient with leftist nonsense than I am have seen it and expressed that it was the greatest show they’ve ever seen.

So what does Hamilton do right?

The music, from the melodies to the lyrics, are outstanding. As are the performers, both the singers and the dancers.

Hamilton captures the essence of the smartest man in the colonies outside of Benjamin Franklin.

And while the stars of the show might all be avowed socialists, or worse, Hamilton was the supreme capitalist and Father of the American economy and financial system. If he were alive today, they’d probably be picketing the membership chair of early American elitism.

Hamilton was an essential advocate for the adoption of the US Constitution, as the main contributor to the Federalist Papers.

Oh, Hamilton was also a genuine Revolutionary War hero, serving in battles across the colonies most notably at Yorktown.

There’s good reason why this man’s face was on our currency despite having not been a president.

And it is reflective of our failing educational system that it took a musical to keep him on the ten dollar bill (the slave owning Andrew Jackson taking his place in the Treasury Department’s memory hole – an equally absurd move, however that’s a column for another day).

But there’s more to the show than the title figure.

The set One Last Time about Washington’s Farewell Address is poignant and a thing of genius that underscores the truly singular character of the Father of Our Country.

The Ladies, Eliza and Angelica Schuyler, give the production a true Broadway sound and feel.

And then there’s Mad King George III, who steals the show behaving like a creepy scorned boyfriend to the colonies.

So what doesn’t work?

I’m not a fan of the generous use of profanities, the over the top New York chauvinism, and that it seems the writers, performers, and adulating audience do not know precisely what the definition of the word “immigrant” is, misusing it regarding Hamilton and the Marquis de Lafayette much like the word “inconceivable” was incorrectly thrown around in “The Princess Bride.”

But one relevant area where they get something very right are the references to the French Revolution.

As for the “casting” and a few historical details, bear in mind it is theater and artistic license is used to tell the story in a unique manner.

And what Miranda and company do is tell a very important story in a relatable form that will strike a chord with a new generation of Americans who have trouble relating with old white men in powdered wigs who made great things happen over two centuries ago.

Most of all through Miranda’s story-telling technique, creates a connection between Washington, Hamilton, Jefferson, and Adams and non-Anglos.

Though we might not all share their English blood, these political giants are truly all of Our Fathers.

Interested in more news from Louisiana? We've got you covered! See More Louisiana News
Previous Article GATES: What the Supreme Court’s Abortion Ruling Really Means for Louisiana
Next Article Get Ready For New Orleans’ New Airport To Be The Largest Charlie Foxtrot In America…