…in just two months from today. That’s because on May 15, the airport will open.

And when it does, it will be the most difficult airport in America to access by car.

Construction on an Interstate 10 interchange to expedite traffic to and from Louis Armstrong International Airport’s new passenger terminal won’t begin until September at the earliest – 3½ months after the terminal opens. And it’s going to take four years to finish.

The new timetable was provided this week by the Louisiana Department of Transportation and Development, which expects to spend $95 million to $125 million expanding the I-10 interchange at Loyola Avenue in Kenner. Construction proposals are due by April 23, and the agency expects to award the contract July 1 and tell the winner to start at the end of August.

The job calls for adding flyover ramps connecting I-10 directly with new access roads close to the $1 billion terminal, for widening the interchange’s existing ground-level ramps and for related work. The flyover ramps are designed to whisk I-10 traffic to and from the airport without mixing into local traffic on ground-level Loyola Avenue.

If you’ve spent much time driving on Loyola Avenue, which is the first north-south corridor you come to after passing into Jefferson Parish on I-10 from the west, the impression you do not receive is that it’s a road capable of handling traffic to and from a major airport.

But the airport’s project website assures us all that it’ll be fine. Really. 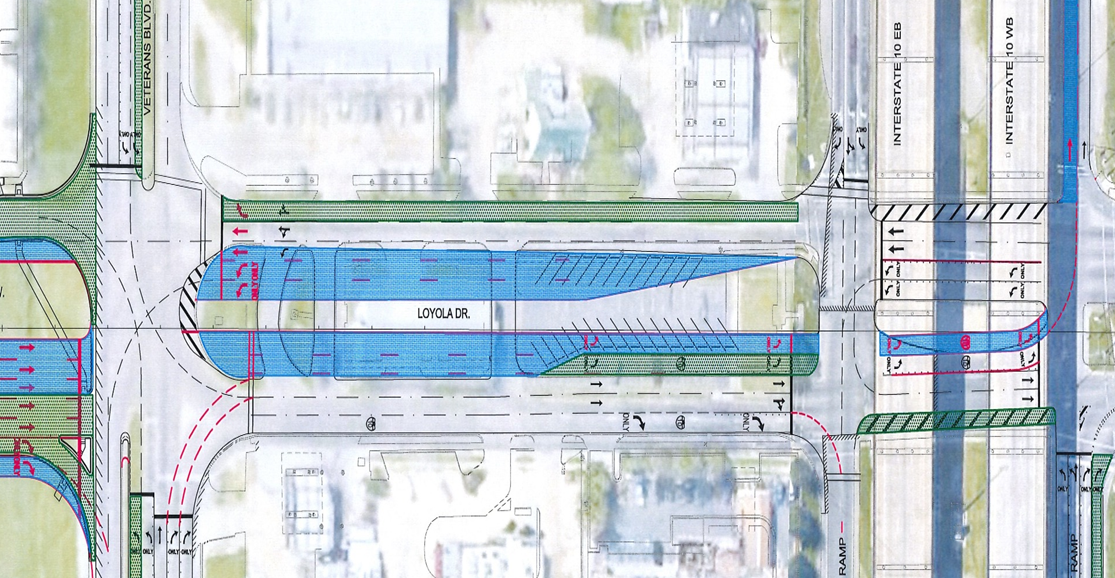 The Louisiana Department of Transportation Development (DOTD) is currently completing a surface improvement project to add lanes to the two-block stretch of Loyola Drive from I-10 toward the airport access roadway. These interim improvements will accommodate traffic flow to the new terminal, and DOTD expects to complete this project in time for the terminal opening in May 2019.

You should be totally comforted by that. Or maybe not, since there was also this on the same website…

In August 2019, DOTD will start construction work on its long-term plan to modify the interchange on I-10 at Loyola Drive by developing a flyover ramp allowing traffic to flow from the interstate directly to the airport roadway. This work will further improve projected traffic flow patterns for the City of Kenner and address its commercial and economic development needs. This project is anticipated to take 4 years to complete.

So the same DOTD which is now a month behind schedule on getting started on the flyover ramps is promising that the Loyola Drive improvements will be done on time.

So are they done? Nope. Not from what we’re hearing. They’re not close, and right now it would be an upset if that road construction was finished by May 15. The optimistic projection now is that maybe that work will be done by the end of May. Maybe.

Meaning that to get to that newly-opened airport you’ll have to get off at the Loyola Drive exit, fight through a two-lane road between I-10 and Veterans Highway, and then pass through a residential neighborhood before coming to the airport access road. Here’s video the New Orleans Times-Picayune shot of what access to the new airport looked like as of January, at which time nothing had been done to improve the surface street access…

It’s an estimated $13 million project to improve the surface access to the new airport terminal, and two months ago it hadn’t even started.

And at some point maybe that will improve. Meaning it won’t be an absolute bottleneck that wastes 40 minutes of your time in a traffic jam and backs up all the way onto the interstate, causing car wrecks aplenty. Instead it’ll just be a 15-minute waste of time while you’re trying to make a flight.

And that might well be optimistic. Think about what this will look like around 5:00 in the afternoon.

Oh – and you won’t be able to get to the new airport terminal from Airline Highway like you can if you’re going to the existing terminal. Folks coming from Baton Rouge or other parts west of Kenner can use the I-310 exit to Airline Highway and then turn into the airport from the south and it’s exceptionally convenient – well, if you’ll be flying out of the new North terminal you’ll just park at the current airport and then take a bus which will drive all the way around the property, because otherwise you’d be crossing the runway (and there won’t be a road tunnel under it). And you’ll just need to get to the airport earlier.

By the way, the plan is to shut down the old airport terminal and redevelop the land. We’re going to bet that won’t happen for a long time. Watch.

Not to mention this new terminal will have only one TSA checkpoint, as opposed to the three. So essentially, you’re bringing the worst of Hartsfield International Airport in Atlanta to New Orleans.

We’ve held off calling this thing an abject boondoggle so far, but there’s no reason to hold back anymore. This is Mitch Landrieu building a monument to himself with a billion dollars of our money while he destroyed monuments built to better men who preceded him by 150 years, and this is failed leadership at the state level which didn’t stop him from doing this when the New Orleans airport really needed to be moved to the west, where there is land in quantities suitable to build a truly competitive facility. What the region needs is a large-scale multi-modal transportation facility with close access to I-10 and I-55, the river and a rail line – but to make something like that happen requires competent and engaged leadership and Louisiana lacks all of it.

So instead what you get is a half-assed effort like what’s about to slouch forth in two months, and four years of the least-accessible airport in North America which serves as a barrier to road access to New Orleans from the west, thanks to the traffic snarls backing up onto the interstate, as well as an air traveler’s nightmare. This, to service a city whose economy is almost completely dependent on tourism.

They started construction on this thing in 2016, and the above is where we are in terms of accessing the airport. That’s what you have.

Calling Baton Rouge – now is your opportunity. Time to throw the bank at Southwest Airlines to get some flights out of BTR, because there will be a renewed interest in avoiding MSY going forward.

Oh – and one more thing. Did you know the website for the New Orleans airport is flymsy.com? Flymsy. We’re serious.

Interested in more news from Louisiana? We've got you covered! See More Louisiana News
Previous Article BAYHAM: The Great American Musical (With Bad Language)
Next Article Javonte Smart Is Cleared To Play For LSU Today, But Will Wade Won’t Be Coaching…