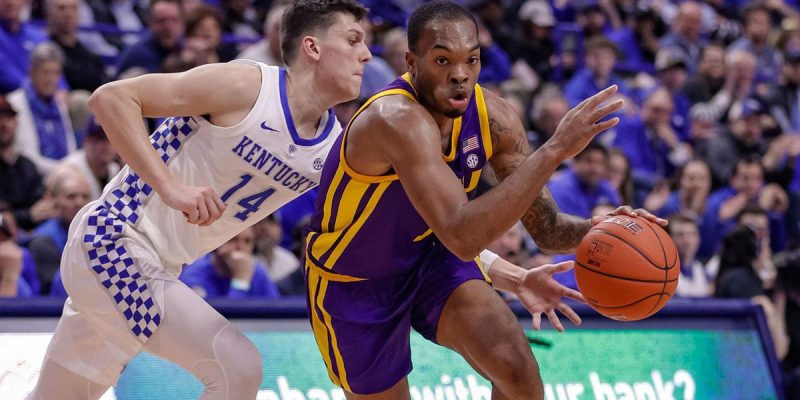 LSU takes on Florida in the SEC Tournament in Nashville at noon, and the top-seeded Tigers will have one of their star guards available if not their head coach. A statement issued by the university this morning was good news for freshman Javonte Smart…

“LSU has cleared freshman Javonte Smart for today’s game against the University of Florida in the SEC Men’s Basketball Tournament. Smart has fully cooperated and participated in a joint inquiry with LSU and the NCAA resulting from reports of wiretapped conversations purportedly involving Head Coach Will Wade.

“Smart was held out of the regular season finale against Vanderbilt out of an abundance of caution in cooperation with the NCAA. Though the inquiry is not closed, after multiple additional interviews, there has been no wrongdoing identified to date. As a result, and because of his full cooperation and transparency in this matter, Smart has been cleared by university officials for play on Friday.”

No such statement was made regarding the status of Will Wade, the head coach who engineered a turnaround from 2-16 in league play in 2016-17, the season before he arrived, to 16-2 this year – one of the fastest, most pronounced turnarounds in the history of the conference. Wade’s indefinite suspension was installed because following the leaked wiretap transcripts of Wade discussing a “strong-ass offer” he made to Smart, transcripts about which he’s been subpoenaed to testify about in a federal criminal case in New York next month, the coach declined to be interviewed by LSU officials.

A failure to effectively communicate for which both LSU and Wade might well be at fault has something to do with Wade’s suspension. A source close to the process tells The Hayride that LSU had approached Wade about a private conversation on the morning of Friday, May 8, the day following the leak of those transcripts to Yahoo! Sports, and he originally declined. Wade then changed his mind and the two sides discussed an afternoon meeting – but by then a representative from the NCAA had asked to be included in the meeting, and LSU officials didn’t think it would be a good look to tell the NCAA no.

Our source tells us that two other coaches touched by the current investigation and criminal case involving Adidas employees set for trial in New York next month, Arizona’s Sean Miller and Auburn’s Bruce Pearl., both agreed to meet with school officials with the NCAA present, and neither are currently suspended (Miller was suspended for one game last year and returned, though it’s expected his tenure as the head coach at Arizona is at an end). The difference, of course, is that neither Miller nor Pearl had been subpoenaed at the time of their meeting with school officials and the NCAA.

Wade is going to have to have that meeting if he’s to be reinstated, and time is running out for it to happen in time for him to coach the team in the NCAA Tournament. Whether he has a future as LSU’s coach beyond the current season likely depends on what happens at that trial in April and what testimony he would give there, and then what an NCAA investigation into the basketball program might produce. LSU officials have repeatedly said they want to keep him as the coach as long as possible, but it doesn’t look like the school will bend too much to make that happen.

But at least the team will have its full complement of players for today’s game, against an opponent LSU had to go to overtime with twice in the regular season – losing 82-77 at home before winning 79-78 on the road in the penultimate game of the year.