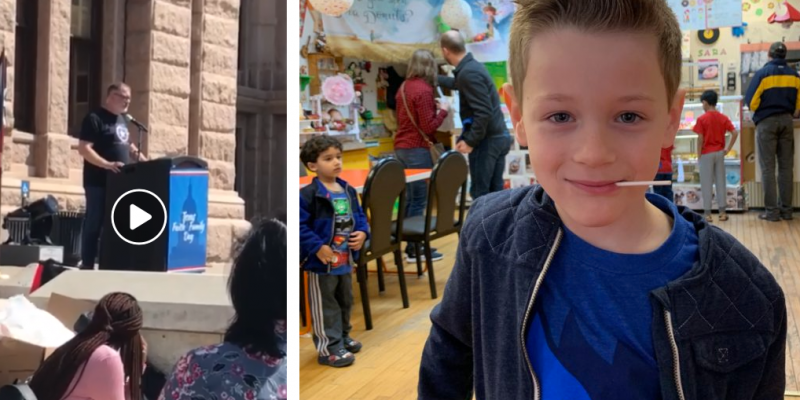 A father’s emotional plea to save his son took center-stage at the Texas Capitol this week.

While Jeff Younger‘s six-year-old son, James, is in no particular physical harm at the moment, his mother is insisting the boy identifies as a girl and she dresses him as one, which Younger said is not only a denial of his rights as a father but also forcing it on his son. Younger said James prefers to dress as a boy and is happy to do so when in his custody.

Regardless, in two years, James’ mother planning to begin the process of “gender re-assignment” on the boy (“Luna,” she named him) via hormone blockers — “Chemical castration,” Younger called it, and suggests it will culminate with his penis being removed and an artificial vagina surgically created.

Since the courts have become involved, Younger’s ex-wife, a “modern parenting” pediatrician, now has all rights to psychological care.  According to Younger, his ex-wife is working with the so-called Gender Education Care Interdisciplinary Support program (GENECIS) at the otherwise renowned Children’s Health in Dallas, which provides support for families wishing to “transition” their children who suffer “a persistent distress called gender dysphoria.”

(Further complicating the matter: James has a twin brother, Jude, who is reportedly not being subject to the same pressures.)

Here is a fact sheet from his father explaining more about the sticky situation: https://savejames.com/wp-content/uploads/2018/09/HELP-SAVE-JAMES-2.pdf

We could find no statement from the mother at this time. A court transcript can be read here. https://savejames.com/wp-content/uploads/2018/12/July-10th-Court-Transcript.pdf

Interested in more news from Texas? We've got you covered! See More Texas News
Previous Article GATES: What the Supreme Court’s Abortion Ruling Really Means for Louisiana
Next Article What To Make Of Richard Lipsey’s Demands For A Housecleaning At LSU?