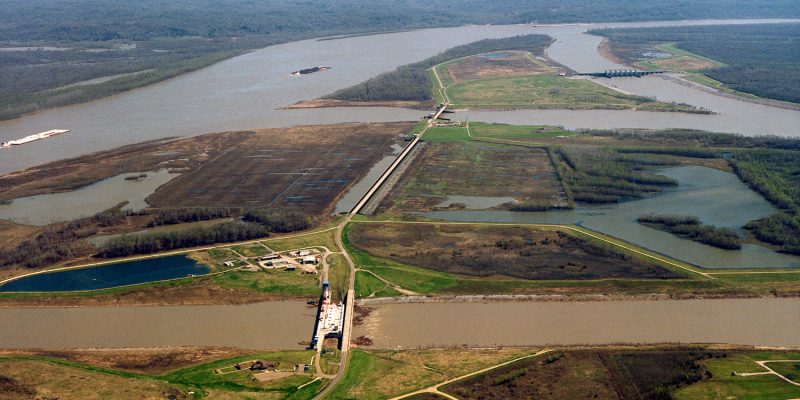 According to the Waterways Journal Weekly, last month the state of Mississippi sued the United States Army Corps of Engineers “over what they are calling the ‘unconstitutional taking of almost 8,000 acres’ of state-owned land. The state is seeking damages in excess of $25 million.”

How did the corps take 8000 acres of land, you might ask. Why, by controlling the Mississippi River and keeping it from utterly destroying the economies of Baton Rouge and New Orleans and just destroying Morgan City.

First, some background. Many moons ago, the Mississippi River and the Red River were two completely separate waterways. Then, at some point, the Mississippi formed a bend (known as Turnbull’s Bend) into the Red River, splitting the Red River in two. The north section continued the name Red River while the south section was called the Atchafalaya River.  Considering the inordinate amount of time it took steamboats to travel through Turnbull’s Bend, Captain Henry Shreve of Shreveport fame cut a channel, thus bypassing the bend and somewhat straightening the river. This left part of the old bend or river, which eventually became the Old River.

This handy graphic from Wikipedia shows this in detail:

Eventually, the Mississippi kept flowing more and more into the Atchafalaya, and the Corps of Engineers took steps to prevent the Mississippi from changing course altogether.   Not only would changing course severely Dan for the economies of Baton Rouge and New Orleans, the excess water flowing down The Atchafalaya  would essentially flood Morgan City. The Corps built several structures known collectively as the Old River Control Structure to regulate the amount of water the Mississippi dumps into the Atchafalaya. Not  only did this have the benefit of keeping the Mississippi river main channel flowing through Baton Rouge and New Orleans, but it also could be used as a measure, along with structures such as the Morganza and Bonnet Carré spillways, to prevent flooding in those cities in times of high water.

Enter the great state of Mississippi, which owns lands in the counties bordering the river to the north of the structure.  The Waterways Journal noted that Mississippi Secretary of State Delbert Hosemann, who apparently has charge of such lands, claimed in his suit that “the rate of flooding on the 8,000 acres in question has increased dramatically since the 1973 flood and subsequent expansion of Old River and ongoing development within the watershed of the Mississippi River. Between 1950 and 1972, flooding occurred on those tracts of land in Claiborne, Adams and Wilkinson counties an average of once every 107 days. Between 1973 and 2016, that frequency increased to once every 15.7 days.”

That’s a pretty startling statistic which, if true,  certainly lends credibility to Hosemann’s arguments.  But it does not prove them.

According the Clarion Ledger over in Jackson, “Despite the assertions in the lawsuit, Hosemann said the state has not yet conducted studies of the river’s water flow meant to scientifically prove that siltation from Old River is to blame for increased flooding. Hosemann said such studies would be conducted over the next two years at a cost of $50,000.”

Ooooops. Sue first, ask questions later.  You can bet your bottom dollar that Uncle Sam has plenty of scientists and plenty of studies to show otherwise.

And, as it turns out, there could be other factors contributing to the floods like, you know, rain and stuff: “Some experts say increased upstream development is sending more water downstream. And in two of the last three years, the lower Mississippi has seen unusual wintertime floods sparked by heavy rains upstream that could be related to climate change. Historically, the Mississippi’s peak flood has been in the spring.”

At first blush, this seems like a political stunt. Hosemann is running for lieutenant governor over in Mississippi, and what better way to ingratiate yourself to the locals along the river then to sue the big bad federal government over flooding of land near theirs.  If you win, you can expect that the locals will follow suit, pun intended

Which, of course, begs the question: when will the Louisiana lawyers start the suits? I’m not  necessarily passing judgment on the validity of the suits. I will leave that to the opinions of the water control experts.  In my view, it would have been more prudent to have the studies in hand proving your accusations than to make half cocked claims in a federal lawsuit. But more pertinent for us here in The Great State of Louisiana, I would expect that if there is a way to reward his friends, you can expect our dear Governor to farm out such suits  to contributors of his who may or may not be members of the Louisiana bar, especially in an election year and especially when his chief opponent represents the western side of the Mississippi river above the control structures.

Either way, keep an eye on this one.