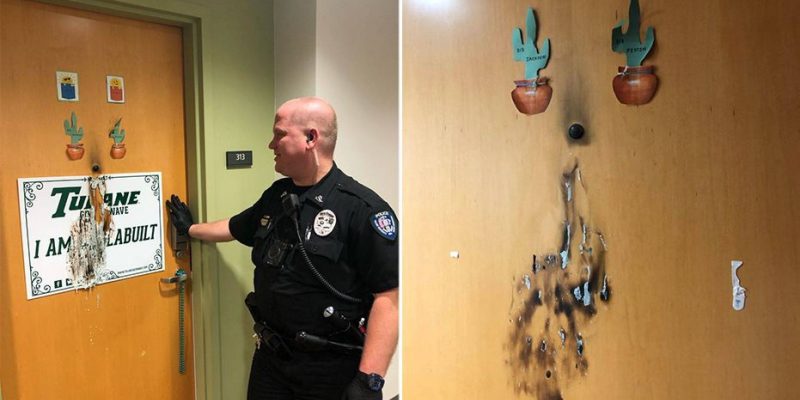 Tulane campus police have arrested three people for allegedly setting the dorm room of a member of that campus’s Young Americans for Liberty on fire. The three people will be facing aggravated arson charges.

Tulane campus police have arrested three suspects, two men and one woman, in the arson fire at the dorm room door of two university students whose personal information had been spread online revealing their participation in a libertarian youth organization.

Robert Money, 21, David Shelton, 20, and Naima Okami, 20, will be facing counts of aggravated arson, according to Blake Arcuri, the general counsel of the Orleans Parish Sheriff’s Office in Louisiana. It’s unclear how the police identified the three individuals.

The fire reportedly happened on Saturday at 12:20 a.m., when sophomore Peyton Lofton, 20, says he received a text from his roommate and best friend, Jackson Arnold, 20, that their dorm room was on fire.

Lofton was out with friends at the time.

“It took a while for me to process last night when they said someone lit the door on fire,” says Lofton. “I was originally really angry, stormed back to campus and once I got there reality started setting in. I was a little scared, a little nervous, I could have been sleeping…”

Jackson Arnold, who is the roommate of the student who as targeted, was in the dorm at the time of the fire. Thankfully, he got out with no injuries.

On March 17th, a left-wing Twitter account “doxxed” Peyton Lofton as a member of Tulane’s Young Americans For Liberty chapter, which he is. Lofton is also the head of Tulane’s Turning Point USA chapter. Speaking of which, Turning Point USA President Charlie Kirk helped draw attention to the fire on Twitter.

This is Peyton Lofton, our chapter leader for @TPUSA at Tulane

The violent left is targeting students!

Wonder if the media will report this horrible crime against a campus conservative? https://t.co/0ER3O8NSD6

As for Peyton Lofton, he’s not intimidated by this attack. He plans on staying on Tulane’s campus, despite the fact his family is only 20 minutes away. He also told Fox News he plans on working twice as hard now.

Recently, Tulane’s YAL chapter helped sponsor a conference on criminal justice reform. That conference drew participants from all across the political spectrum.