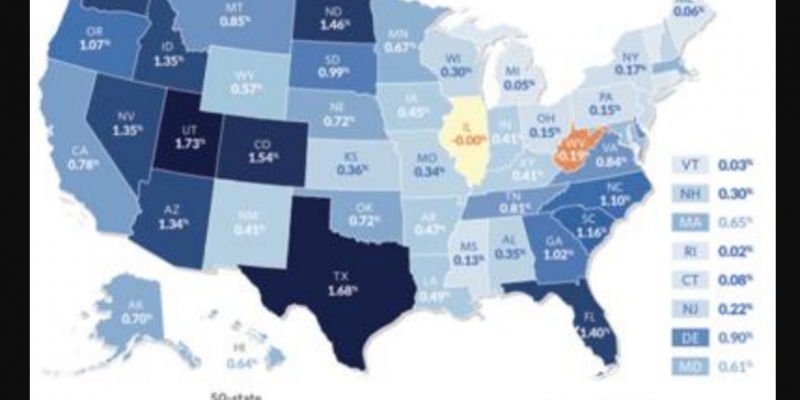 All but two states – Illinois and West Virginia – gained residents over the past decade, even as population growth nationally continued to slow, according to the Pew Charitable Trusts updated Fiscal 50: State Trends and Analysis.

Nationally, the rate of population growth has declined every year, with the slowest annual growth since 1937 coming in 2018, according to the U.S. Census Bureau. Additionally, slower growth rates are expected in the future because fertility rates are declining and death rates of the aging Baby Boomer population are increasing.

Population change measures the difference between all new residents – babies and newcomers from other states and outside the U.S. – and those who died or moved away.

Nine states that lost the most residents to outmigration over the last 10 years are West Virginia, Illinois, Alaska, Hawaii, New York, Louisiana, Wyoming, Mississippi, and Connecticut. Michigan had the fifth-slowest growth rate over the decade, equivalent to 0.05 percent a year.

Overall, the fastest-growing states over the last ten years are predominantly in the West and South: Utah, Texas, Colorado, and North Dakota. Each of these states added people at more than twice the median rate and were among the top five in economic growth since the beginning of the Great Recession, Pew reports.

All but two of the 15 Northeast and Midwest states experienced the slowest population growth in the U.S. For 50 years, people have left these states for Sun Belt states, Pew notes.

Illinois and West Virginia were the only states with fewer residents in 2018 than a decade earlier. West Virginia lost approximately 34,500 people since 2008, the equivalent to 0.19 percent every year. It has recorded population losses for the past six years. Illinois’ growth rate was virtually flat over the same period, losing 6,000 residents since 2008.

A number of reports show outmigration trends that flow out of high-tax states to those with a lower tax burden. A Southern Illinois University at Carbondale poll from 2015 showed that half of the Illinois residents polled would leave the state if they could. The No. 1 reason: Taxes. National migration patterns can be complex, fueled by multiple factors. Generally, Americans have been moving in recent decades to warmer climates, more affordable areas and places with more jobs.

Population growth over the past year sheds light on shifts that affect near-term revenue collections and spending, Pew notes.

Additionally, the authors explain, “More people usually means more workers and consumers adding to economic activity as they take jobs and buy goods and services, which generates more tax revenue. A growing economy, in turn, can attract even more workers and their families.”

“Though a smaller population can lead to a reduction in some types of spending, it also means there are fewer residents to help cover the costs of long-standing commitments,” like debt and state employee retirement benefits, Pew adds.

Some states like Maine and Vermont, Pew notes, are offering financial incentives to people who relocate there.

The report’s authors add that calculating population data represents only one factor underpinning state finances, which also are affected tax and spending policies and economic factors outside of state policy regulation.