…at least that what the organizers of the effort to incorporate the city of St. George out of unincorporated areas in the southern reaches of East Baton Rouge Parish seem to believe.

Yesterday, Gov. John Bel Edwards announced, essentially, that he would call the St. George election for October, which essentially put Edwards on the side of Baton Rouge’s mayor-president Sharon Weston Broome. The St. George organizers had made it clear they were looking for a May election date.

Governor John Bel Edwards announced Monday, Mar. 11 that the election for the incorporation of the City of St. George will not be held in May.

The governor’s office says as of Mar. 8, they had not received the petition.

Edwards now has until July 9 to decide if the issue will appear on the October ballot. The election is scheduled for Oct. 12.

The St. George issue has occasioned, as issues of Louisiana’s governance often do, a donnybrook of sorts between Edwards and the office of Attorney General Jeff Landry. Landry suspects, as the St. George organizers do, that Edwards deliberately slow-walked the calling of the election so as to deny the organizers a chance for a May vote.

Edwards said that his office had to review the petition before calling the election. That claim was dubious at best from a constitutional standpoint, and Landry told him so in a letter last week… 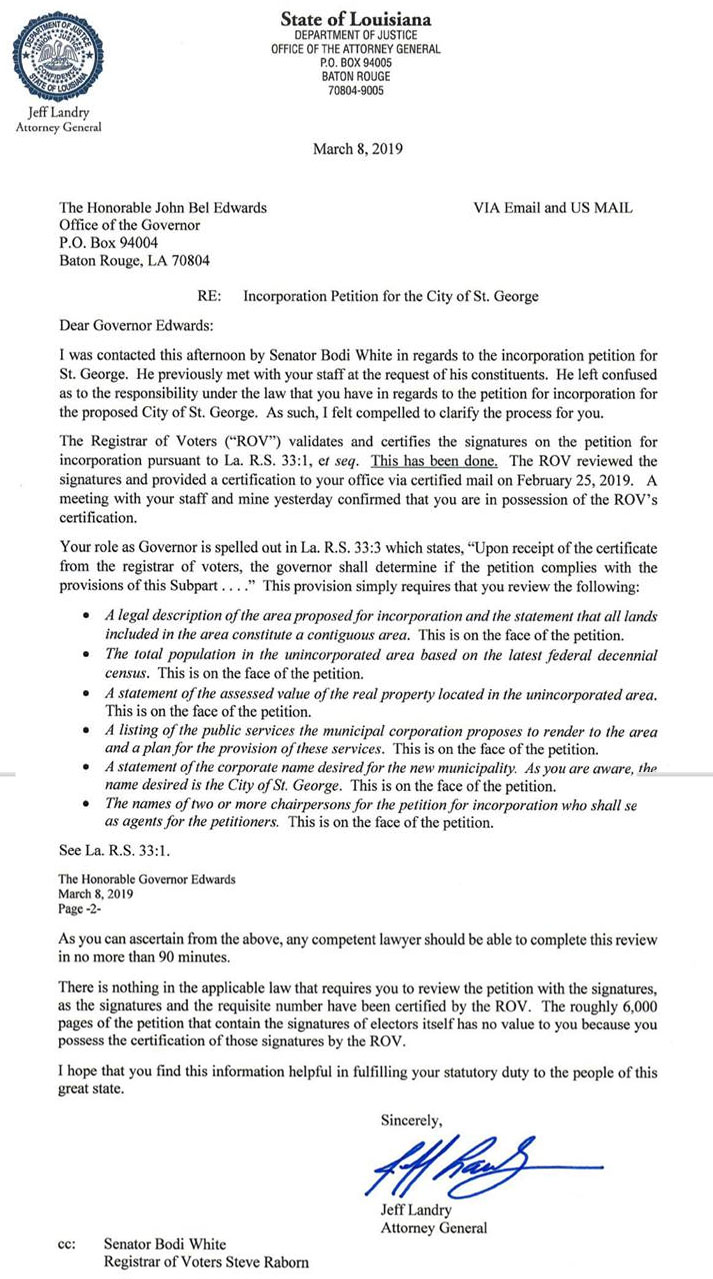 Edwards shot back at Landry for that letter, through his lawyer…

Matthew Block, Edwards’ executive counsel, said the governor had to assure the petition met state-mandated guidelines, but that Landry wouldn’t provide a copy of the document to Edwards in a timely manner.

“I am sure you agree that any competent review of the petition would require the governor to actually review the petition,” Block wrote to Landry. “The petition is literally a petition to the governor, and yet, your office decided not to send a copy of it to him.”

Block went on to say that, had the Attorney General’s Office delivered the petition to the Governor’s Office when it was requested Feb. 28, the governor would have had an additional week to determine if it met all the requirements within state law – possibly in enough time to hold the election in May.

Block also noted his initial review of the electronic version of the petition found that the “lengthy legal description of St. George” was illegible.

“Your letter does not mention this as an issue, but it is a very real one, as the legal description is required by (state law),” Block’s letter reads.

Block also said the governor took into consideration how much it would cost the city-parish to hold the election in May versus October pointing out that members of the Louisiana State Bond Commission have in the past been critical of elections being called when a tax proposition was the only thing on the ballot due to the additional expense to the taxpayers.

“I am sure you believe that all elected officials should at all times be responsible stewards of taxpayer dollars,” the response states.

Officials in the Governor’s Office have previously said adding the St. George proposal on the October ballot would cost about $5,000. A separate election in May would have cost about $86,000, the officials said.

Which is more than a little bit of dancing on the head of a pin, as the governor’s office surely paid attention to the St. George petition effort as it was going on for more than six months last year and had been turned in all the way back in October. If it was the Attorney General’s duty to provide the governor with a copy of the petition a week earlier it’s hard to believe the governor’s office couldn’t have taken it upon itself to secure a copy of the petition from the St. George organizers or the Registrar of Voters.

They’re not lazy, you know. They just don’t want to do this, much less do it in a timely fashion.

And therefore, the St. George issue will be decided on the same day the primary in Louisiana’s statewide elections will be decided. It’s expected that will cause a higher turnout and give opponents, who will likely have more campaign cash to spend, a better chance to defeat the proposed incorporation.

It takes 25 percent of the registered voters of an area signing a petition to put its purpose on a ballot. One may assume that the signers of that petition are exceptionally likely to turn out and vote for the proposed measure in question. That would mean, assuming there are at least as many non-signers in favor who will vote as there are signers who won’t, that in any election with a turnout under 50 percent the petition side should carry a majority.

Average turnout in East Baton Rouge Parish swings around a mean of about 50 percent for major elections.

Last fall when there was a primary election for Secretary of State and congressional seats were on the ballot in November, turnout parish-wide was as high as 53 percent (it was 26 percent for the Secretary of State runoff in December). In 2016, turnout in East Baton Rouge Parish for the November presidential election and Senate primary was 67.8 percent; it dipped to 39.6 percent for the December runoffs for Senate and the mayor-president election. And in 2015, the statewide cycle corresponding to this fall’s elections, turnout was 39.1 percent in October (it ticked up to 43 percent for the gubernatorial runoff in November).

If it’s a 39 percent turnout for the St. George election on the same ballot as the gubernatorial primary, St. George is going to be incorporated. That’s a no-brainer. If it’s as high as the presidential election turnout, it’s difficult to say what voters in the affected area will do before a campaign gets started.

Which would indicate that while Edwards sided with Broome and engaged in some suspicious delay tactics to keep the incorporation off the May ballot in which it would surely have passed (and Broome’s complaints about a low-turnout May election ring hollow seeing as though she put a billion-dollar tax hike on the ballot last spring for a low-turnout election), it’s still quite likely the St. George organizers will win their city.