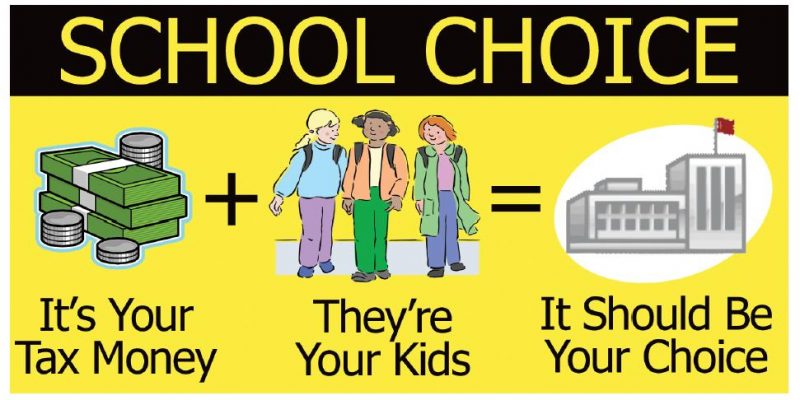 The Education Freedom Scholarships program “would empower students and families to choose the best educational setting for them – regardless of where they live, how much they make, and how they learn,” the DOE states.

“This model has succeeded at creating opportunity for students in Alabama, and I am hopeful through this legislation we can create similar opportunities for students around the country,” Byrne said in a statement.

State participation would be voluntary, and states would have full control over the scope and purpose of their scholarship programs, according to the bill. States are not required to include private schools as recipients. Scholarships could be directed to special education, transportation or apprenticeships, the sponsors note.

In DeVos’ home state of Michigan, voters have rejected school choice initiatives on the ballot. The Blaine amendment to the state’s constitution has blocked “direct or indirect” public funding to private schools for about 50 years.

“Every student in America deserves to learn in an engaging, meaningful and personalized way,” DeVos, a long-time advocate of school choice, said. “No student should be denied that opportunity simply because of where they live or their family income.”

Michigan’s laws are “widely known as the worst for crushing innovative school choice programs,” Ingrid Jacques wrote at Detroit News. Jacques argues the federal tax credit “could be Michigan’s best option for expanding school options under the current constitutional limitations. Since the tax credits are fully federal, there shouldn’t be any legal shortcomings.”

According to an analysis produced by Midland-based free market think tank, the Mackinac Center for Public Policy, Michigan would receive at least $150 million of the $5 billion pool of scholarship funds, based on the formula for allocating tax credits to donations.

“Many Michigan students and families could benefit from the availability of extra scholarships to fund all sorts of educational opportunities – from private school tuition to tutoring, afterschool programs, special-needs therapies, dual-enrollment programs and apprenticeships,” Ben DeGrow, director of Education Policy at the Mackinac Center, told Watchdog.org.

Cruz said the bill “allows for scholarships to give elementary and secondary students a personalized education experience, as well as scholarships for career and technical education, apprenticeships, certifications, and other forms of workforce training for postsecondary students.” The goal is to “incentivize voluntary investment in students” and “energize a new era of opportunity in education,” he emphasized.

The measure would allow for privately funded scholarships to expand educational opportunities for students without taking a single dollar from public schools and the students who attend them, the DOE states.

Individual and business taxpayers can contribute to student scholarships through state-identified Scholarship Granting Organizations (SGOs). The contributions are eligible to receive a non-refundable, dollar-for-dollar federal tax credit, but contributors cannot receive a total tax benefit greater than the amount of their contribution.

The bill also gives families control over the use of scholarships for their child’s elementary and secondary education, which may include career and technical education, apprenticeships, and dual and concurrent enrollment, the Department of Education states.

Lindsey Burke and Adam Michel at the Heritage Foundation oppose the initiative.

“The administration’s support of school choice is praiseworthy, but a federal tax-credit scholarship program poses a threat to education choice in the states, and undermines the goal of a streamlined federal tax code,” they wrote.

DeGrow added, “There are a lot of challenges to getting tax credit legislation passed in Congress. But Michigan and other states should embrace the possibility of boosting scholarship donations that create more educational opportunities, rather than turn their backs because some don’t approve of the choices parents might make.”

Pennsylvania’s Commonwealth Foundation, which has generally opposed a national school choice program if the federal government dictates terms, said this proposal “seems to allow for states to run their own programs as they see fit.”

Senior Policy Analyst Marc LeBlond told Watchdog.org, “There’s no question that school choice offers hope and opportunity to families in failing school districts. Tax credit scholarships in particular are hugely popular in Pennsylvania, so it’s great that they are now part of the national discussion. As long as the legislation is worded to ensure states have autonomy, this seems like a solid proposal that will benefit students.”