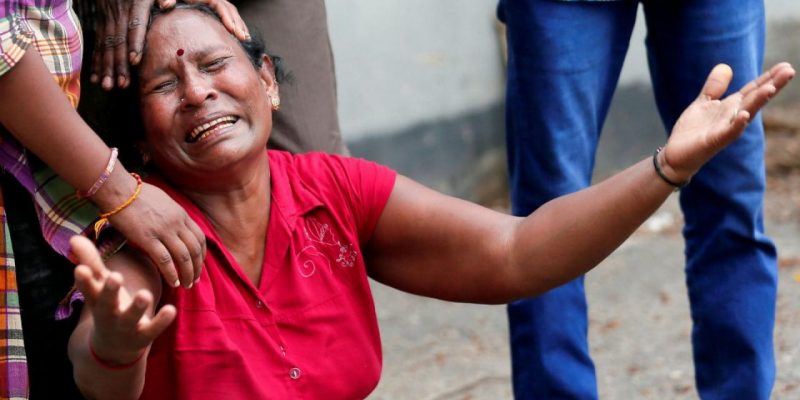 While it appears to have been a well-planned attack, no one has yet claimed responsibility for the horrific acts committed in the South Asian country. At least two dozen of the dead are believed to have been foreign citizens with several of them believed to be Americans.

The island-nation off the India coast was placed under a 24-hour curfew following the deadly attacks on Easter Sunday which included a blackout of many online messaging platforms.

Three police officers have been reportedly killed in a raid conducted on a house following the attacks.

“The United States condemns in the strongest terms the terror attacks in Sri Lanka on Easter morning. Attacks on innocent people gathering in a place of worship or enjoying a holiday meal are affronts to the universal values and freedoms that we hold dear, and demonstrate yet again the brutal nature of radical terrorists whose sole aim is to threaten peace and security.”

“There is no room for any sort of extremism in this country, and we will take necessary action to stop such groups from operating in Sri Lanka. The police are currently conducting investigations, and all culprits will be taken into custody as soon as possible.”

As many as sixteen suspects have reportedly been arrested so far.

“138 people have been killed in Sri Lanka, with more that 600 badly injured, in a terrorist attack on churches and hotels. The United States offers heartfelt condolences to the great people of Sri Lanka. We stand ready to help!”

While nearly all public figures expressed condolences following the tragedy, conservatives pointed out the vocabulary-acrobats of Hillary Clinton and former President Barack Obama who both referred to the victims as “Easter worshippers”, a strange substitute for the obvious appropriate term, Christians. It appears reminiscent of the left’s refusal to say “radical Islam”.

“I call upon all to pray that all those who are injured may be healed soon and that all these families who have lost someone may be consoled.”