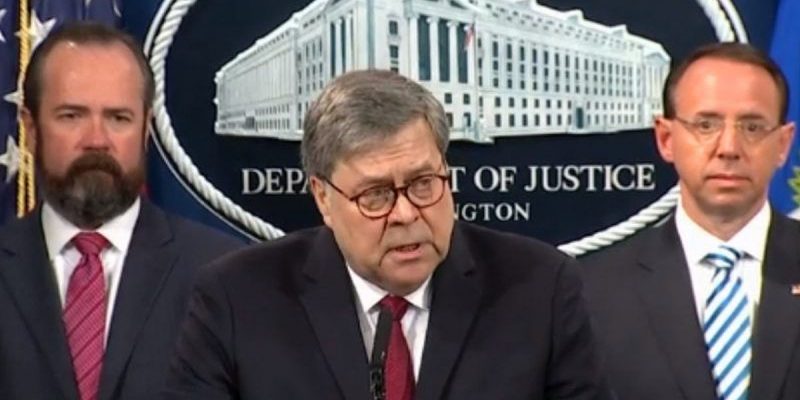 It has been quite a while since Americans have witnessed an honorable and effective Attorney General serving in that important position. The two Attorneys General during the Obama administration were hopelessly partisan and extremely protective of the President.

Eric Holder famously claimed that he was “the President’s wing-man” who was “there with my boy.” Obviously, he worked non-stop to protect the President from any legal trouble and congressional investigations. Whether it was Operation Fast and Furious, the IRS Tea Party abuse scandal or the Benghazi terrorist attack, Attorney General Holder was insistent on shielding Barack Obama from any trouble. He was so committed to that goal that Holder became the first U.S. Attorney General to be held in Contempt of Congress for refusing to release documents related to the Fast and Furious investigation.

He was succeeded as Attorney General by Loretta Lynch, who continued the policies of Eric Holder. She not only protected Obama, but she also evidently believed it was necessary to protect Hillary Clinton. Right before the Department of Justice officially decided to exonerate Hillary Clinton of wrongdoing in the investigation of the handling of her personal email communications, Lynch met privately with former President Bill Clinton on the tarmac of the Phoenix airport. Supposedly, the two discussed golf and grandchildren among other inane topics for 20+ minutes while the investigation of Hillary never was mentioned. Of course, no one should believe such as ridiculous cover story, which just shows the measures that Democrats will take to protect one of their prominent party leaders.

When President Trump was elected, he decided to choose U.S. Senator Jeff Sessions (R-AL) as his Attorney General.    At first, it was believed that Sessions would be a fine Attorney General. He was a stalwart conservative during his Senate career. During the 2016 presidential campaign, he was the first United States Senator to endorse Donald Trump for President.

Unfortunately, his utter ineptitude was only exposed after he assumed the position of Attorney General. His horrific mistake was to recuse himself from the investigation into Russian involvement in the 2016 election. This one misguided determination overwhelmed any positive decisions he may have made as Attorney General. In addition, it was totally unnecessary since Sessions did not meet with Russian officials in any improper context during the 2016 campaign. His interactions were both formal and minimal, so the recusal decision was mind boggling.

The President was apoplectic and claimed he would have never appointed Sessions if he knew that Sessions would recuse himself from something so monumental. Obviously, Sessions bowed to pressure from within the Department of Justice. By recusing himself, Sessions allowed his Deputy Attorney General, Rod Rosenstein, to oversee the investigation and make the determination whether a special counsel was warranted.

Not surprisingly, Rosenstein elected to launch a special counsel investigation and appointed Robert Mueller to oversee the probe. This started the $35 million two-year witch hunt which has distracted the Trump administration from its beginning and cast a shadow over almost everything the President has accomplished.

Sessions was a very weak Attorney General who could not stand up to the “Deep State” wing firmly entrenched in the Department of Justice. Fortunately, after the mid-term elections, President Trump forced Sessions to finally resign, and the search began for the type of Attorney General Trump supporters had been expecting from the start of his term.

After a search and a brief tenure by Interim Attorney General Matthew Whitaker, the President selected William Barr for this critical position. Barr had previously served for two years as Attorney General during the administration of President George H. W. Bush.

Both Democrats and Republicans expressed admiration for Barr and praised his unblemished record of integrity and his vast legal background. During confirmation hearings, Barr gave an impressive performance setting the stage for a tenure as Attorney General that has been both consequential and controversial.

Since the day his second tenure as Attorney General began on February 14, Barr has been subjected to unfair media attacks and congressional harassment. After he summarized the Mueller report, Barr was summoned to testify before Congress. Instead of joining the criticisms on president Trump, Barr actually claimed that “spying did occur” on the Trump campaign. He also stressed that “spying on a political campaign is a big deal.” He is now investigating whether this unprecedented monitoring of a presidential campaign was warranted.

This announcement infuriated congressional Democrats and their allies in the media. It was similar to the rage that greeted Barr when he concluded that the Mueller investigation not only exonerated President Trump for Russian collusion, but also for obstruction of justice.

Mueller’s team officially cleared the President of Russian collusion charges, but not for obstruction of justice. This dereliction of duty by the Special Counsel’s office of partisan Democrat prosecutors forced Barr, assisted by Rosenstein, to make the decision. After examining the evidence and ten instances noted by Mueller, including some that Barr believed did not merit consideration of obstruction of justice, the President was exonerated.

At his stellar press conference on Thursday, Barr summarized the Mueller report and gave his reasoning for making the determination about the President. In doing so, Barr has withstood vicious criticism from the media and Democrats, who now claim that he is a Trump “stooge.”

In reality, Barr is no one’s stooge. As a former Bush administration member, he is also deeply rooted in the political establishment. Nevertheless, he has displayed remarkable courage to move forward with these decisions and finally end this nightmare for the country.

It took a few years for President Trump to get it right, but he finally found a real U.S. Attorney General, who insure that justice will be served.

“I don’t believe that we can afford to take a neutral stance anymore.” - Twitter CEO (publisher) Jack Dorsey, a year ago, about whether his company would take an editorial position on content others post on his app.
More Quotes