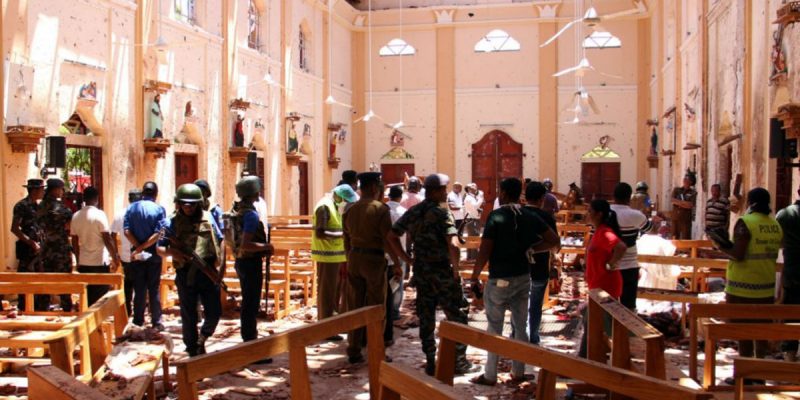 On Easter Sunday, the holiest day of the year in Christianity, 200 people perished and hundreds more suffered injury in a coordinated terrorist attack on tourist hotels and Christian churches across the island nation of Sri Lanka.

Many of those killed lost their lives as witnesses to their faith while celebrating Easter Mass.

It’s one thing for American Christians to go to church outside of the country in places like Central America or Europe, where Christianity is the predominant faith and the biggest challenge is trying to follow along a service being conducted in what may be an unfamiliar language.

But what about in corners of the world where Christian churches are more missions than parishes, especially in locales where there has been a long and bloody history of sectarian strife?

I wonder if the men and women, some having brought their children with them, pondered the risk they were taking when they set out that morning for the St. Anthony Shrine in the Sri Lanka capital of Colombo.

Did they even give a thought about something potentially happening or were they spiritually prepared for the worst and willing to accept the consequences of never walking out the church they were walking in?

I can personally attest to the anxiety one experiences when going to church in a country where Christians are not just a minority but are potential targets of terrorists.

Several years ago I attended Mass at a small Catholic Church in Istanbul. I was in the former Byzantine (and later Ottoman) capital on a weekend and I generally didn’t like to skip church even while traveling.

But being awakened to the call for prayer broadcast from the minaret across the street from your hotel every  morning for a week makes one aware that he is not in south Louisiana anymore.

I was more than a little apprehensive about going, to a point that upon arriving at the church, I began inspecting the place as if I were a part of a presidential advance team.  Very little escaped my notice.

The church was on a pedestrian boulevard and that there were small subtle barriers, stout enough to obstruct a vehicle, made to resemble accoutrements.

Upon walking inside the church I was ushered to the sacristy, which was where they would be celebrating Mass for the two dozen people present.  I don’t know if this was out of convenience or security though I figured in our location we were protected by various levels of walls from a car bomb.

The Mass went fast though I kept glancing towards the wall, mentally preparing for the worst.

Is it fair to associate tumult, upheaval, and bombings with the Islamic world?

That question is irrelevant. Fairness is not the issue; reality is.

Four of the five most active terrorist organizations in the world have an Islamist identity (ISIS, Taliban, Al-Shabaab, and Boko Haram).  And the fifth group consists of Maoist insurgents in India and Nepal, no friends of any religion at all.

Houses of worship stand out as venues where infidels can be found and are thus attractive targets for Islamist murderers.

Since that trip, Istanbul has experienced numerous terror related bombings though not necessarily directed towards Christian sites.

A few years later I visited Cairo for New Year’s. While Egypt is a predominantly Muslim country, 10% of its population of almost 100 million are Christian.

I had done some research on line about Catholic churches in the area but my reluctance grew while riding in a cab in Cairo when the driver, a retired air force veteran named Mustafa, pointed out an enormous structure rising above the skyline.

“There is the Coptic cathedral.  It was recently bombed by ISIS terrorists,” said Mustafa.

“Three weeks ago,” was his reply, and assuming I was interested in seeing it, Mustafa pulled off the highway and drove to the front gate.

After clearing through security of what was still a crime scene, I walked to the chapel where 29 people were killed in the explosion. There a makeshift memorial of a small artificial Christmas tree was decorated with pictures of each of the victims as ornaments.

It was a moving experience akin to putting a contemporary face on the people who perished witnessing the Christian faith in the New Testament.  So many women and teenagers had died as martyrs for having simply been at church at the wrong time.

While heading back to the airport, I asked to stop at the French Jesuit Church in Heliopolis. The church stood out in its design and the prominent place it occupied on the street. But two other visuals really made an impression: the entrance to the church was practically a giant cage and it was locked from the inside.

And these weren’t soldiers or police, but security guards resembling mall cops with machine guns.

Could I trust these two to fend off a church under attack?

Could I trust them not to be the ones initiating the attack?

Mustafa saw the look on my face as I stared at the church and their rent-a-soldiers and he suggested it might be time to call it a day and return to the hotel. I didn’t argue.  Two years later that may still be the last time I skipped on church on a weekend.

My prayers for those men and women, both the locals and the tourists, who chose to go to church in Sri Lanka last Sunday and never walked out alive.

And my admiration for those who went to those same churches, walked out or had to be carried out, and will be at church again this Sunday.

They are truly saints.

Interested in more national news? We've got you covered! See More National News
Previous Article Joe Biden Is Running For President
Next Article Here’s a list of all of the Islamic groups who hate Christians and Jews