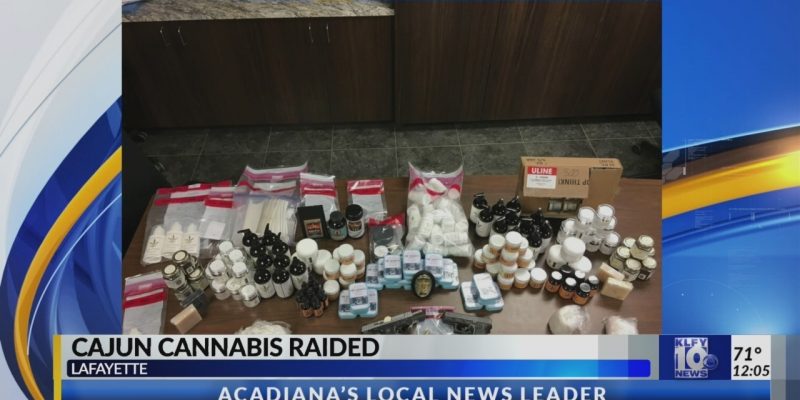 On Wednesday night, the owner of Lafayette’s Cajun Cannabis store was pulled over by Lafayette Parish Sheriff’s narcotics agents and taken into custody. Travis DeYoung was charged with 13 drug and weapons-related charges. As of writing, he’s being held in the Lafayette Parish jail.

According to the Daily Advertiser, here’s what was seized from DeYoung’s vehicle and store.

On Wednesday night, agents found in DeYoung’s vehicle were 17 bottles of CBD oil, 14 bottles of edible CBD gummies, 69 glass jars of CBD shatter, 1 box of CBD mints and one handgun.

Lafayette readers brought this raid to our attention because they were concerned this was part of the state’s threatened crackdown on CBD products. Earlier this year, the state Alcohol and Tobacco Control and the State Pharmacy Board said that CBD products were outlawed in Louisiana and threatened a crackdown on them.

This is also the point to explain a brief and possibly oversimplified difference between CBD and THC. A person cannot get high off of CBD and it is used as a painkiller, relaxant, and other medicinal uses. THC is the psychoactive substance used in cannabis and is what gets a user “high.”

Lafayette Parish Mark Garber says that this arrest is part of an investigation spurred by specific complaints about Cajun Cannabis.

“He was selling schedule one narcotic products outside of his store as well and delivering the products that contained THC,” said Garber. “If you’re going to do that, you should expect some law enforcement contact at some point.”

Many viewers voiced concerns on social media saying DeYoung was targeted by deputies.

It’s probably no surprise that I agree with the majority of state’s voters and support marijuana legalization on both the federal and state level. If I was emperor, I would pardon Travis DeYoung and every other nonviolent person who has ever been convicted of a marijuana-related offense. But marijuana is still a banned substance in Louisiana and the place to change that is in Baton Rouge.

As for legalizing hemp, there is a bill advancing through the Louisiana legislature that would do just that. Yesterday, the House Agriculture Committee unanimously approved HB 491 which would legalize hemp production in this state. The only thing I would change in the bill is I would file an amendment on the House floor to legalize CBD. Currently, the legislation does not address CBD.

The Cajun Cannabis raid is probably not the beginning of the long-threatened state crackdown on CBD. Instead, it is the symptom of the failed war on marijuana.