Which makes for a really interesting dynamic Edwards is going to have to navigate as this year’s gubernatorial election campaign gets fully cranked up. Namely, that Edwards is in thrall to some people who are far, far further to the left than he wants to present himself as to a red-state electorate in Louisiana.

Something a friend sent me earlier this week is worth a perusal. The DGA is the Democratic Governors’ Association… 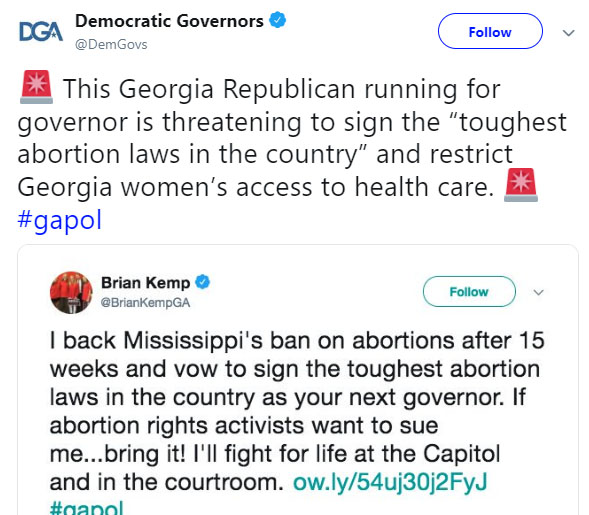 Above is a tweet that the DGA put out last year attacking Mississippi Governor Phil Bryant and then-gubernatorial candidate Brian Kemp of Georgia for supporting 15-week abortion bans. As you’re aware, Governor Edwards has signed the same kind of ban into law, yet the DGA now claims that “they are less concerned that a candidate like Edwards has conservative views on abortion.” They clearly were concerned when GOP governors and candidates were pushing the same position last year, which makes their dismissal of Edwards’ views on abortion very hypocritical.

The DGA’s hypocrisy on this topic raises a lot of questions as they become increasingly involved in supporting Governor Edwards, despite his support for an abortion position that they have openly attacked other candidates for.

And for Edwards’ part, as the 2020 presidential primary ramps up, it’s going to get harder and harder for him to hide from his national party leaders like Alexandria Ocasio-Cortez and radical proposals like the Green New Deal, single-payer healthcare, and whatever other socialist-style policies they push between now and November.

Sure, not a lot of voters in Louisiana are going to particularly care about the DGA’s hypocrisy. If they reflexively tied Edwards to the collection of nuts and imbeciles who comprise the DGA’s membership based on the “D” next to his name he would never have beaten David Vitter even with the hookers meme front and center.

But it’s still a problem, especially as the 2020 Democrat presidential primary continues to play out with a horde of candidates frantically trying to outdo each other in pandering to the Far Left. At some point Edwards is going to have to align himself within the Democrat Party based on those presidential candidates swinging through Louisiana to raise money; it’s a bad idea for them to come, as a Beto O’Rourke or Pete Buttigieg or Bernie Sanders coming here and making headlines with a campaign stop will only heighten the awareness that Edwards either embraces the national left-wing loons or runs away from his party’s own base. Either way he’s better off if they leave Louisiana alone, and they can’t really do that.

How does Edwards get around this? We’ve already discussed it here and there. Namely, that for example on the issue of abortion John Bel Edwards isn’t really pro life. He put Rebekah Gee, the biggest Planned Parenthood advocate (and former) employee he could find, in charge of the Louisiana Department of Health, and since then you’ve had virtually nothing done in terms of governance that moves the needle in the pro-life direction other than Edwards signing bills that would have had the numbers to override his veto anyway and smoke him out of his position.

As we noted, what matters isn’t Edwards’ rhetoric but his governance, and he’s strangely ineffective in implementing these conservative positions he purports to hold deep in his soul. A couple of examples out of the abortion issue: Louisiana passed its admitting-privileges bill, and LDH hasn’t spent a dime defending it against a constitutional challenge – that’s come out of the Attorney General’s budget. And when Ralph Northam came out for infanticide, Edwards had nothing to say until Northam’s blackface stuff followed it. We did a pretty thorough job of smoking that out and putting it on display, and as this campaign goes forward you can expect the IE players and the two Republican campaigns themselves will pick up on it, and examples like it, to hammer Edwards as much closer to the national Democrats ideologically than he advertises.

One of the central flaws in Edwards’ presentation, one he got away with in 2015 because that election turned into a referendum on David Vitter’s past and political personality but probably can’t this time because he’s up for re-election and therefore it’s Edwards who’s in the spotlight, is that he’s trying to be all things to all people. To his base he’s the reincarnation of Huey Long and he’s out to claw back tax breaks and giveaways to the rich so as to provide for the little man goodies like Medicaid for all, a more lenient criminal justice system and expanded state bureaucracies to provide public-sector jobs, but to everybody else he’s this Trump-friendly centrist who’s for God and guns and unborn babies. At some point he’s going to appear a fraud to one group or the other, or – and this is where he could really collapse – both at the same time.

Edwards has to hold that base vote, which is consistently lurching leftward, while at the same time trying to corral that soft Republican vote he was able to snatch away from Vitter. It’s a Herculean task he’s attempting, and there is little reason to believe he’s going to be successful in pulling it off.

Interested in more national news? We've got you covered! See More National News
Previous Article BAYHAM: Getting History Out Of Storage
Next Article Has Trump Broken The Democrat Party?