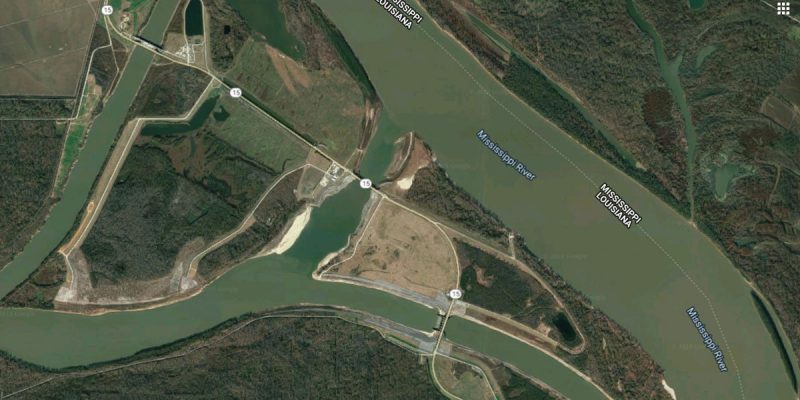 As our readers certainly know, the Mississippi River is ridiculously high at the moment. The Bonnet Carre Spillway upriver from New Orleans is open, for the second time this year, and next week the Morganza Spillway is set to open.

And for good reason. Here’s a photo shot by the Baton Rouge Police Department looking south down the eastern bank of the river from close to downtown…

It’s a serious situation. The U.S. Army Corps of Engineers is calling the current flood fight “historic and unprecedented,” which is why it’s about to open the Morganza Spillway for only the third time since its inception in 1954.

Preparations have been made to stop backwater flooding in the floodway, including sinking a barge in Bayou Chene to serve as a temporary flood control structure. And when the Morganza Spillway opens it’s going to be some kind of show – by now everybody has seen what it looked like when Morganza was opened in 2011 during that year’s flood fight, but this is going to be a little more of a gradual release.

Even still, it’s pretty scary. After all, here’s what it looks like at the Morganza floodgates as of two days ago…

The management of the river when it’s at such levels is the subject of my American Spectator column out this morning; that’s a rather long piece tracing the history of the Corps of Engineers’ efforts to keep the Mississippi in its current channel and if you want to know a little about the hydrology and engineering history of the Corps’ river management, feel free to check it out.

Another source for information about the river, and particularly the Old River Control Structure (ORCS) just north of the Morganza Spillway, which is the facility at which the Corps manages its fight to keep the Mississippi from changing course and flowing down the Atchafalaya to the Gulf – something my column points out would be an economic disaster on a biblical scale not just for Louisiana but for the U.S. and world economies as well – is Weather Underground co-founder Dr. Jeff Masters, who earlier this month wrote an excellent series of blog posts at that site talking about ORCS, the history of river management on the Lower Mississippi and what the future holds. Read Masters’ series here, here and here if you’re interested.

Brian Haldane had Masters on the air this morning at Talk 107.3 FM in Baton Rouge, and it’s a 12-minute interview well worth your time…

Meaning that the Corps’ talent and resources had better be up to the task. And the nation’s attention really ought to be on problems like this rather than global warming and some of the other agenda-driven environmental fads out there.

The real issue, as discussed both in Masters’ series and my column, is the sediment deposits on the Mississippi’s riverbed. It’s a question of basic hydrology – the river has to flow at a certain rate in order to continue moving sediment down its course; if that flow slows down, the sediment falls out and is deposited in the river bed. And south of the ORCS – north of it as well; an LSU study found some 30 sand bars between Vicksburg and the ORCS upon which some 535 million cubic meters of sediment has accumulated over the past 30 years – there is enough sediment gathering that at Red River Landing, the Corps river gage located just across the Mississippi from Angola State Penitentiary, the river bottom has rise by an alarming 30 feet and the channel has narrowed significantly.

So what has to be done, and Congress has mandated the Corps begin doing it (this came as part of the Water Resources Development Act of 2018), is to start dredging the river bottom and getting that sediment moving again.

This isn’t really all that complicated. There’s a method of dredging called “agitation dredging,” in which – as applied to this problem – all you’re doing is scraping sand and mud off the riverbottom and moving it up into the water column so the river can move it toward its mouth. It might take lots of sites along the river where that dredging is being done, but that’s the point of the WRDA’s reforms of the Corps’ dredging practices.

And the beauty of using the river to move that sediment for you down toward its lower delta is that there you can extract it to do coastal restoration. Which is an entirely separate post in and of itself.