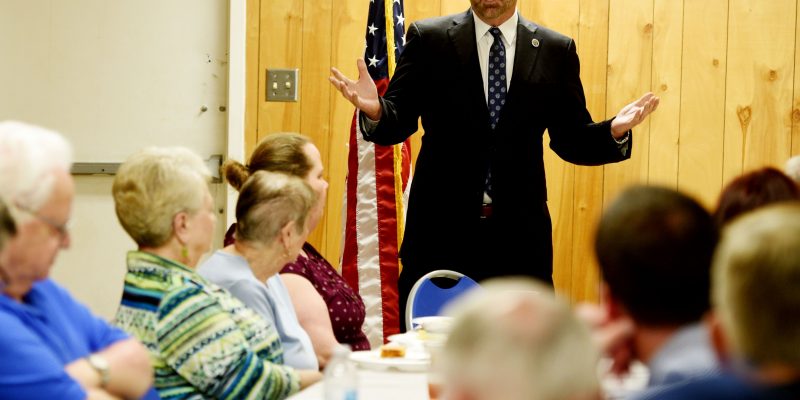 In audio obtained by The Hayride, Governor John Bel Edwards’ Chief of Staff Mark Cooper touted JBE’s conservative values before attacking one of the area’s most conservative legislators.

Cooper is heard on the recording saying,

“I talk about Pro life, um, you know, his stance on the 2nd amendment – (unintelligible) – he’s almost a Republican, right?” *crowd laughter*

“But I gotta tell ya, someone who’s disappointed me is a Representative from this area. Some of the things she has said on the radio – (unintelligible) – some of the things have been very slanderous.”

The news first broke when District 9 State Representative Dodie Horton (R-Haughton) stood up for herself in a recorded speech from the capitol, essentially calling Cooper a coward for attacking her while she was not present or even in town to defend herself.

Her words seem to be serving as a rallying cry against the deep south’s lone Democrat Governor, boasting over 3,000 views in less than 24 hours.

“Today, while I’m away from my family and friends – while I’m down here working for you in Baton Rouge – the Governor’s Chief of Staff, Mark Cooper, decided to come to South Bossier to attack me. His reasoning, as he stated, is because I don’t do what the Governor tells me to do and I “attacked” the Governor on the radio.

For the record, as evidently Mark Cooper and maybe his boss don’t understand, my job as the State Representative for District 9 is to be your voice. Not his voice. My job is to represent you, not represent him… a single person. I am no puppet. Despite history and some people’s desires, the members of the House of Representatives are not puppets. We should not want them to be puppets, regardless of who the Governor is.

In terms of attacking the Governor on the radio, all I said was that he didn’t have the authority to kick our elderly out of nursing homes when he threatened to do so last year. I’ve stated that we have a surplus and don’t need the increased sales tax. Stating facts are not attacks. At least they didn’t used to be.

I’m not outraged by your personal attacks on me. I can handle that and have faced much worse than your petty attacks. I’m most outraged by your attack on my constituents and District 9. I am one of the most accessible elected officials in the state. I’ve even gone above and beyond to give every constituent a direct and convenient way of giving me feedback through YourVote. My votes in Baton Rouge reflect District 9. So, by attacking my votes, you’ve attacked my constituents. And, for that, you should be ashamed.

Shame, shame, shame on you – Mark Cooper and Co – for coming to my District and attacking us when I’m down here working and unable to be there to defend my constituents and myself. For all of your talk of honor – which you spent a while harping on in that meeting – you displayed zero honor in your attacks on me and my constituents. Next time you want to attack me, do it to my face. Do it in person.

Your remarks today – that by default attacked my constituents – is not befitting of someone in your position. You owe an apology to the people of District 9. You need to respect our American rights of being able to disagree on some issues and come together on others. Respect our democratic Republic and don’t bash people for having their own thoughts instead of bowing to your boss’ will.

Instead of always expecting my district to bend to your will, Governor, you need to recognize that it is YOUR job to bend to the will of the people. In fact, you’re going around bragging about a $300 million surplus that you’ve taken off the backs of our hard-working taxpayers. As a man of the people – Governor – I’d like your support in repealing the 0.45% sales tax increase from last year as it is evident that it isn’t needed. For once, compromise to the will of the people… instead of asking everyone to bend to yours.

Thank you, Shane Cheatham and Dennis Bamburg Jr. for shutting him down and defending my voting record on behalf of District 9.”