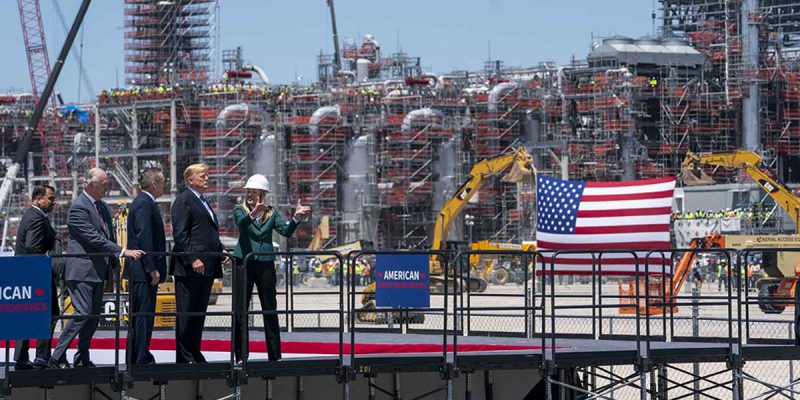 When most politicians visit places like Louisiana, they tend to make empty promises. President Trump, on the other hand, returned to the Pelican State after delivering exceptional results.

Before Donald Trump took office, Louisiana’s economy was struggling to overcome the disastrous policies of the Obama administration, which candidate Trump vowed to reverse. Throughout most of 2016, for instance, the state unemployment rate hovered above 6 percent — a clear sign that the labor market was in real trouble.

Obama’s war on energy didn’t help matters, either. Instead of encouraging technological innovation, Obama was happy to ban offshore drilling in multiple locations around the country, even while admitting that doing so could hurt Louisiana’s economy.

Of course, everything changed when President Trump won the 2016 election and pledged to undo the damage his predecessor had done to the U.S. energy sector.

“I am proudly announcing six brand-new initiatives to propel this new era of American energy dominance,” the President said in 2017 as he introduced the administration’s plan to revive American energy, which included efforts to expand exports of liquefied natural gas (LNG).

“[T]he United States Department of Energy is announcing today that it will approve two long-term applications to export additional natural gas from the Lake Charles LNG terminal in Louisiana,” Trump noted at the time, saying, “It’s going to be a big deal.”

To highlight just how big of a deal that is, President Trump toured Sempra Energy’s Cameron LNG Export Facility in Cameron Parish on Tuesday — a $10 billion project that is projected to create 10,000 construction jobs alone.

“[T]he US is expected to export a record amount of natural gas this year — with Louisiana leading the way,” he wrote ahead of the scheduled visit.

Hayden is right — according to a recent report, U.S. LNG exports to the European Union have increased by 272 percent since 2016, largely thanks to President Trump’s trade negotiations with European Commission President Jean-Claude Juncker last year.

This ongoing energy revolution has had a profound effect on Louisiana’s economy. According to the latest Bureau of Labor Statistics report, the state’s unemployment rate is currently at 4.7 percent — more than a full percentage point lower than it was when President Obama left office.

Anybody can make empty promises, but it takes a real leader to follow through and deliver the results that the people have been led to expect.

When Donald Trump returned to Louisiana for the third time since his inauguration, he didn’t need to apologize to local workers or beg for our support ahead of the 2020 election, because he’s already demonstrated that results speak louder than promises and we can count on him to keep our best interests at heart.