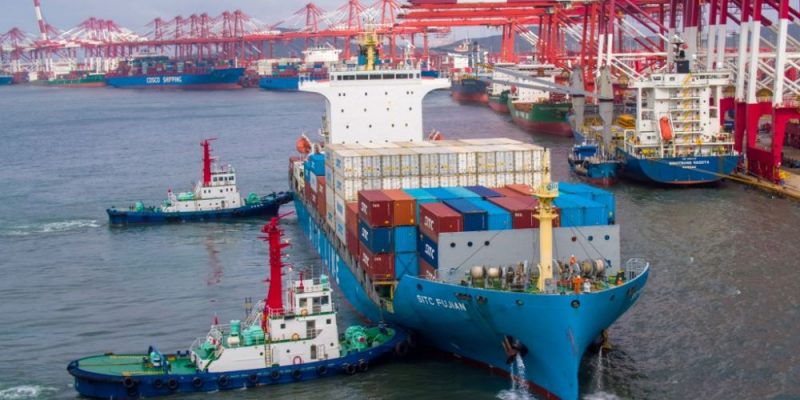 As the Trump administration overhauls U.S. trade policy with China, the Chinese government imposed a 25 percent tariff on some U.S. imports this month, and plans to extend it to an additional 5,000 products on June 1.

Trump says he faults U.S. trade representatives and former presidents for a $500 billion trade deficit, arguing, “We’ve never had a situation, nor has there ever been a situation in history where a country has done that to another country.”

China has not only undercut American workers through its low-wage manufacturing companies, but its government also requires U.S. companies to surrender their proprietary technology in order to do business there, the administration argues, which has led to theft of trade secrets and cyber-theft.

“We also have the theft of intellectual property that is probably in the neighborhood of $200 [million] to $300 million every year,” Trump said.

Depending on the industry or analyst, the tariffs are either great or terrible for the economy, U.S. businesses and the consumer.

In 2015, nearly one in three tons of steel sold in the U.S. was produced outside the country, with record amounts flooding into the U.S. eliminating American steel workers’ jobs, the American Iron and Steel Institute (AISI) argues.

Today, “the Administration’s trade actions and tax and regulatory reform policies, in addition to the strong economic climate enabled by those policies, have allowed the American steel industry to begin to recover after more than a decade of low capacity utilization and weaker earnings due to repeated surges in imports fueled by global steel overcapacity,” AISI states. In early 2019, capacity utilization at existing mills increased to more than 80 percent, levels they hadn’t seen in a decade.

Additionally, previously closed plants have been or continue to be re-opened, laid-off workers are now working, and companies are making investments in new steel production facilities, AISI notes.

“But this recent progress will disappear, and our steel industry will again suffer dire circumstances, if the tariffs are prematurely terminated,” AISI said in a statement.

In April, 263,000 new jobs were added, including 24,000 new manufacturing jobs, according to the Bureau of Labor Statistics. The bureau predicts the industry will need to hire an additional 29,000 machinists alone by 2024.

“Comparing the last 21 months of the Obama administration with the first 21 months of Trump’s, shows that under Trump’s watch, more than 10 times the number of manufacturing jobs were added,” Chuck DeVore, vice president of national initiatives at the Texas Public Policy Foundation, says.

“One can find winners in consumer goods industries that normally benefit from high employment and a pro-growth environment,” Juscelino Colares, a business law professor at Case Western Reserve University, told U.S. News and World Report. Tariffs represent “a short-term, occasionally painful strategy, the timing could not be better because the U.S. economy is running hot and some lost demand in China can be made up here,” he added.

However, according to a new report by researchers at the National Bureau of Economic Research (NBER), the tariffs created an added tax burden on consumers and deadweight or efficiency loss.

“Studies, including our own, have found that the tariffs that the United States imposed in 2018 have had complete pass through into domestic prices of imports, which means that Chinese exporters did not reduce their prices,” the authors write.

For example, a U.S. purchaser of an imported Chinese product now has to pay the import tax on top of the base price. A product that costs $100 now costs $110.

In 2018, Chinese tariffs imposed an annual cost of $419 for the typical household, the authors calculate. They project the new round of tariffs could increase that cost to $831.

Deadweight or efficiency loss refers to companies choosing different suppliers to avoid paying the Chinese tariff. But they still pay a higher price to import from a different country.

The president encouraged U.S. companies this month in a tweet to “Make your product at home in the USA and there is no Tariff. You can also buy from a non-Tariffed country instead of China. Many companies are leaving China.”

Many trade organizations, including the Association of Equipment Manufacturers and the Consumer Technology Association, have said theirs members are looking into what this would mean and cost in real terms.