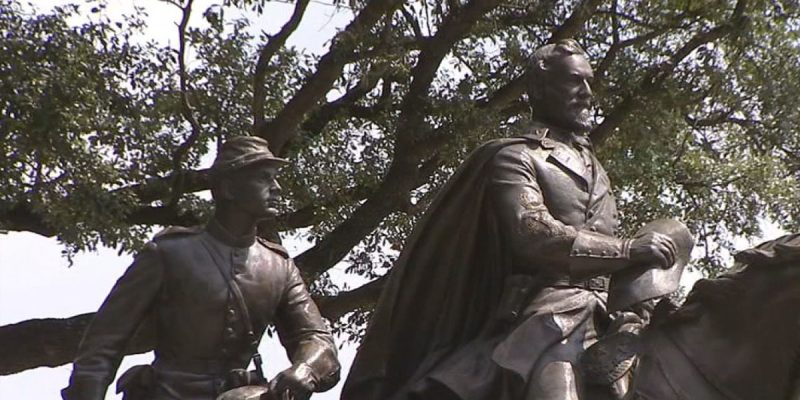 In a distasteful show of spite, hatred and ignorance, Dallas’ Robert E. Lee monument was sold from the auction block. The City of Dallas placed the sculpture of the Southern veteran on an internet bidding website which closed Wednesday with the artwork selling for $1,434,000. Dallas admitted to spending more than $450,000 on the removal and set that amount as the minimum bid to recoup public funds spent carelessly on the removal.

The Fake News outlets have yet to report what Dallas will do with the “profit” from the sale. The reporters are likely too busy celebrating the news to ask questions. As with all governments, they will likely squander it on pointless social programs or some tribute to cultural Marxism.

The General Robert E. Lee and Young Soldier monument originated when the Dallas Southern Memorial Association voted on April 12, 1928, to launch a campaign to memorialize the Southern leader with a statue. The women-run organization led the monument campaign and raised $40,000. They commissioned famed artist Alexander Phimister Proctor. He spent two years sculpting it. The monument dedication was held on June 12, 1936, with President Franklin Delano Roosevelt unveiling the sculpture. FDR was quoted in the Dallas Morning News stating he was attending to honor the “warriors in the lost cause of the Confederacy.” The President, a hero of liberals, commended General Lee, proclaiming, “I am very happy to take part in this unveiling of the statue of General Robert E. Lee. All over the United States we recognize him as a great leader of men, as a great general. But, also, all over the United States I believe that we recognize him as something much more important than that. We recognize Robert E. Lee as one of our greatest American Christians and one of our greatest American gentlemen.”

The sculptor’s great-granddaughter, Laura Ames, noted that Western art historian Peter Hassrick has called “Robert E. Lee and Young Soldier” one of Proctor’s top works. Barvo Walker, a sculptor on the Dallas Mayor Mike Rawlings’ monument task force, called the art the “finest equestrian double-horse sculpture in the world.”Ames.said in 2017 that if the sculpture were destroyed it would likely be viewed as an “unthinkable waste of an irreplaceable, historic treasure.” Proctor’s artwork is on display in art museums such as the Smithsonian, New York’s Metropolitan Museum of Art, and the Amon Carter Museum of American Art in Fort Worth.

The anti-monument argument from the Alt Left often hinges on: what was the intent? Well, the ladies of the Dallas Southern Memorial Association stated in 1929, “Nor should we forget the superb character of ‘Marse Robert’ stands out for all time as representative of the South’s lost fight.” They also pointed out that “Lee did much of his soldiering for the United States in Texas.” The point being the Lee monument was not racist in origin, it did not promote slavery, or white supremacy—it was erected to serve as an inspiration of character to youth, hence the young rider alongside the General.

Meanwhile dopes like Peter Simek of D Magazine typed articles with statements such as, “The Dallas Southern Memorial Association erected the statue to reassert the ideals Lee represented to the Lost Cause: white Southern pride, honor, gentlemanliness, strength, and supremacy.” Simek had no source for these claims, most importantly no source for the white Southern pride accusation which is code for white supremacy.

A major insult is the hypocrisy of monument removals. In this case, the errors of the City of Dallas were all in its intent, its motivation. Mayor Rawlings even said, “This is a decision about morality, about right vs. wrong. In my view, this statue has become a dangerous totem of racism.” The removalists’ intent was founded on lies, propaganda, and racial politics.

Lee was a soldier, he was not a politician. He served the United States, West Point, and he maintained allegiance to his home state of Virginia (his father was a Governor of Virginia.) Leftist liberals demonstrate their hypocrisy routinely when they attack Southerners for being traitors to the Unites States, then proclaiming “Trump is not my President” (yes he is). Dallas officials removed a monument to a man who helped free Texas in the Mexican-American War. The removal is an affront to military veterans, as a similar disservice may be applied to their time serving in decades to come.

The removal-and-sale was wrongful to the donors who financed a true work of art that enhanced Dallas for 81 years. The City of Dallas gained wealth from a military tribute funded by private donations. It’s a slight to the women who spearheaded the campaign in the 1920s and 1930s. The ladies distinguished themselves at a time when their equality was decades away. Now, for all the hard work of these women who raised money and oversaw the building of a masterpiece, some wealthy individual gets to take personal possession.

If auctioning public art to the highest bidder becomes the trend in the removal era, the Antifa crowd and socialists and Marxists need to realize that what they championed would mean the mega rich will get to display art donated to the public in their lavish homes.

According to the terms of the auction, the winning bidder cannot display the Proctor masterpiece in a place that is visible from public property.  Taking public art intended for public display and putting in private hands for private use is not that different from just destroying the art.

Civilization is in question when historic markers and sites are destroyed. And if those pieces of history are no longer safe simply because a segment of public opinion shifted, nothing is safe. Decent people of good will should all be appalled that this is even possible. The unspoken message accompanying the removal movement is that individuals should not contribute to a public cause as it can be subject to public disgrace in the future. It discourages efforts to commemorate history.

This Leftist agenda is not a path towards equality, the powers-that-be are seeking some sort of twisted revenge. Dallas and New Orleans ripped down the histories of a substantial portion of its populations. Like Carpetbaggers of old, Dallas profited off destroying a culture’s history and a part of Dallas’ history. The City did so in a spurt of ugliness and disrespect. While Dallas has not come out and said it, this was an attempt to reverse fortunes. The former Confederate General was placed on the auction block for public bids, like slaves of America’s past. Of course they ignore that America facilitated slavery for a considerably longer period than the four years of the Confederacy. This reversal is uncivilized and societal regression. The discrimination against the Southerner is real.

The politicians are rewriting history and billing themselves as conquerors. The story goes like this: elected officials removed a public landmark in a show of political retribution in defiance to Donald Trump’s election to the Presidency. The politicians then took the artwork, funded by private citizens and gifted to the city from a ladies’ association, and sold it to the highest bidder like it was a used tractor they procured. This episode makes it soberingly obvious that elected officials will stop at nothing to take advantage of the public, and do so under the false premise of morality when it is anything but.

Interested in more news from Texas? We've got you covered! See More Texas News
Previous Article A Marine saves a dog from Afghanistan and the dog saves him [videos]
Next Article Scorecard Season In Texas: Who’s The Most Conservative?