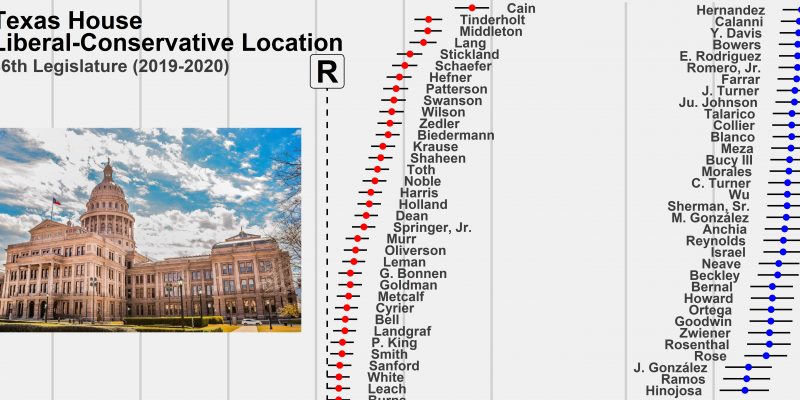 Kids out of school for the summer aren’t the only ones with a final report card.

After the dust has settled from the session, legislative watchers aren’t on a beach somewhere taking a break. They’re busy compiling votes and assigning their respective scores to the members of the 86th Texas Legislature, and attempting to make general sense out of 140 days of organized chaos.

This means that just in time for the incumbents to return to their districts and start thinking about re-election, scorecard season is now in full gear.

Out later today will be Empower Texans’ biennial Fiscal Responsibility Index. Donors were already given a look at it Wednesday.

Out already is the well-regarded Rice University legislative rankings by Mark P. Jones.

Topping the list of conservative Republicans, according to Jones, is Rep. Briscoe Cain. He is followed by Reps. Tony Tinderholt and Mayes Middleton. Bottoming out the Republican list — and this year overlapping one Democrat — is socially liberal Republican Sarah Davis. Reps. J.D. Sheffield and Public Education Chairman Dan Huberty help round out the bottom.

Cain boasted about his Rice score on social media, and constituents who received an advance look at his Empower Texans score note that he received a 94% for his efforts. We can expect many Republican candidates to feature their high grades prominently during the primary season. Not so much for the Democrats.

“The Democratic delegation is not as ideologically diverse as its GOP counterpart, but does nevertheless contain a broad range of ideological worldviews,” Jones wrote. “Gina Hinojosa of Austin, Ana-Maria Ramos of Richardson, and Jessica González of Dallas anchor the liberal end of the Democratic ideological continuum. The most centrist Democrat is Ryan Guillen of Rio Grande City [to the right of Rep. Davis], followed by Richard Peña Raymond of Laredo and Tracy King of Batesville, reflecting the more conservative leanings of voters in far South Texas compared to voters in the major metro urban areas.”

Rep. Hinojosa, who was the most liberal on Jones’ list, is not (from what we can see) bragging about her score. Most would not, as Texas tends to track conservative(-ish). However, Jones did note a “Democratic dozen” of freshman Democrats who voted “significantly more liberal than a substantial number of their 66 Democratic colleagues.”

“Their liberal voting records should safeguard them against any serious Democratic primary challenge in March 2020,” Jones opined, “but do potentially put them at risk in the November 2020 general election — to the extent that district level forces, rather than those at the national or state level, drive voter behavior in their respective legislative districts.”