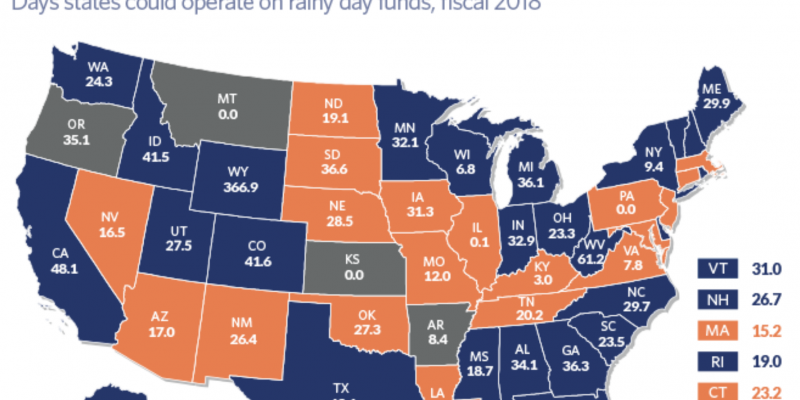 A new report by Pew Charitable Trusts reveals that while most states’ annual finances were better off heading into 2019 legislative sessions than they had been in a decade, “many states are still coping with lingering – maybe even lasting – effects” of the Great Recession.

Referred to as “the lost decade,” the authors of the report argue states collectively suffered in key areas including tax revenue, K-12 and higher education spending, infrastructure funding, and inability to contribute to their rainy day funds. 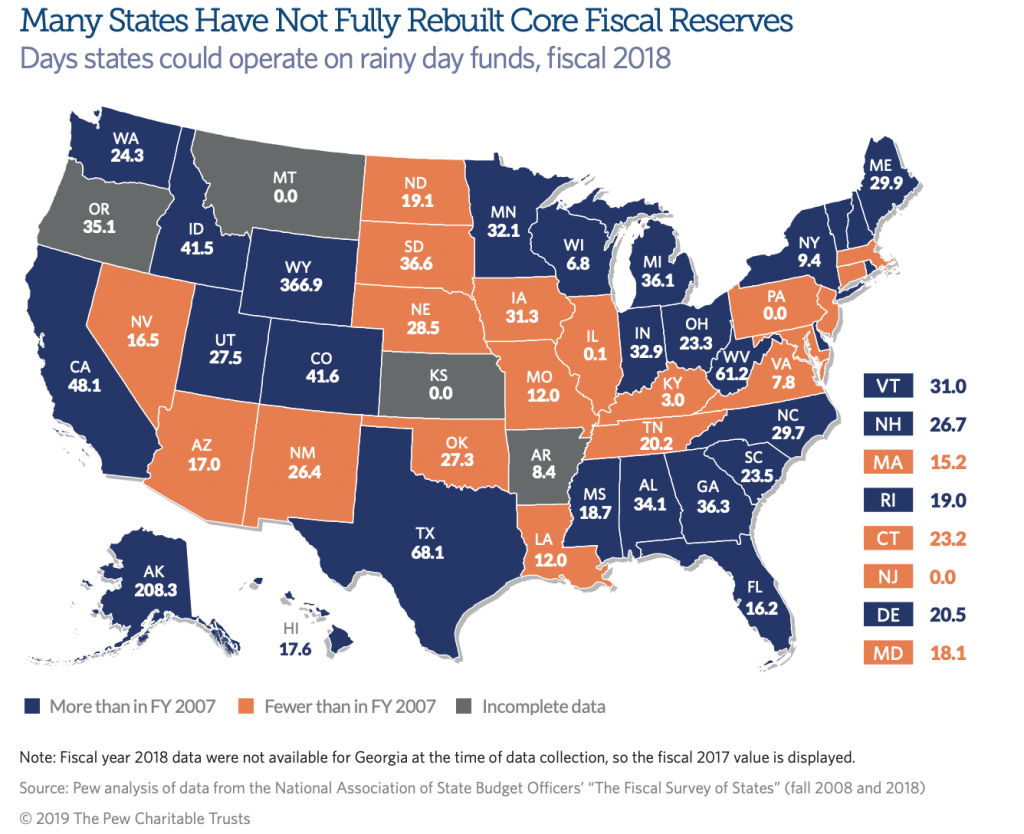 “The legacy of the lost decade is easily overlooked given the second-longest U.S. economic expansion on record, arguably the longest bull market for stocks in U.S. history, unemployment at near-historic lows, and a recent spurt in the growth of state tax revenue,” the report states.

“Like a family that suffered a job loss or pay cut during the recession, states missed out on billions of dollars in tax revenue,” the authors write.

The $238 billion in lost tax revenue excludes even more lost revenue from potential growth in tax receipts that would have occurred under different economic circumstances, the authors note. Even though total state tax collections in late 2018 were 13.4 percent higher than a decade ago, based on quarterly tax revenue collections adjusted for inflation, nine states’ tax revenues were still less than their peaks before receipts fell in 2007-09.

Even after the economy improved, Medicaid still consumes a greater share of state revenue than before the recession. In 2007, for every state-generated dollar, 14.3 cents went toward Medicaid expenses. That number increased to 17.1 cents in 2017.

Medicaid is the second highest expense for states after K-12 education spending.

“Higher Medicaid costs can limit what states have left to fund other priorities, such as schools, transportation and public safety,” the authors write.

Preliminary figures indicate that states spent more money on Medicaid from fiscal years 2017 to 2018 despite slowed enrollment growth. Increased costs can be attributed to states’ responsibility to pay a higher percentage for the program through the Affordable Care Act’s Medicaid expansion. Previously, the federal government covered 100 percent of the costs of Medicaid expansion through 2016. After which states paid 5 percent in 2017 and will pay up to 10 percent by 2020.

“As a result, the gap grew between how much states had saved and how much they needed to cover the pension benefits promised to public workers,” the authors write. “The greater the gap, the more a state would need to set aside annually simply to keep its pension debt from growing.”

As of fiscal 2016, states had enough money to cover only 66 percent of their total pension liabilities, the lowest level since fiscal 2003, according to the report. The shortfall between pension assets and liabilities amounted to a collective debt of $1.35 trillion by fiscal 2016, taking into account new accounting standards that raised the 50-state total by roughly $100 billion, Pew states.

According to a 2018 Truth in Accounting (TIA) financial state of the states report (based on 2017 numbers), 40 states didn’t have enough money to pay their bills and are drowning from their increasing unfunded liabilities. The total debt for all 50 states increased by $53.4 billion to more than $1.5 trillion in one fiscal year, TIA reports.

Most of the debt comes from unfunded retiree benefit promises, including pension and retiree health care debt.

“One of the ways states make their budgets look balanced is by shortchanging public pension funds,” the TIA report states. “This practice has resulted in a $837.5 billion shortfall” in 2017.

In 2017, other post-employment benefits – mainly retiree healthcare liabilities – totaled $663.1 billion. These figures increased from the previous year of $832.6 billion worth of pension debt and $614.9 billion in retiree health care debt.

“Because government financial statements do not report all liabilities, elected officials and citizens are making financial decisions without knowing the true financial condition of their government,” TIA argues. “The lack of accuracy and transparency in government accounting makes it difficult for even experienced readers of government financial documents to understand and evaluate a public-sector entity’s financial health.”

Interested in more national news? We've got you covered! See More National News
Previous Article Scorecard Season In Texas: Who’s The Most Conservative?
Next Article This Morning In Baton Rouge We Saw What Comes From 15 Years Of Friendly Socialism