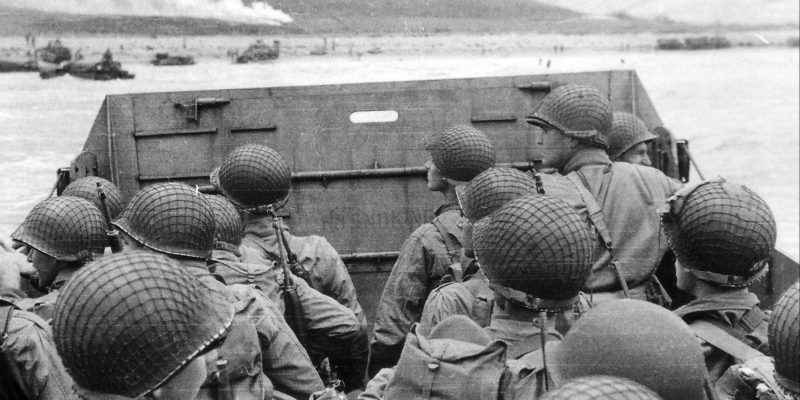 When I hear leftists glower aloud about how America was never great, or “that great,” I always picture the GI’s who stormed Omaha Beach as the ultimate refutation of a slur that is equally obnoxious as it is untrue.

First let us consider the word great, for it has many meanings.

Great can imply things or people that are large, successful, and/or virtuous.

The Russian tsar Peter was physically a large man (6’8″) who also transformed his nation through modernization into a European power. Alexander conquered distant lands stretching from Greece to India. And the Polish pontiff helped bring down Communism while spreading the Gospel across the globe.

America fits all the aforementioned connotations of great.

The United States is a large country in terms of geography, population, resources, and economic/industrial power.

We have also been a successful nation on the battlefield and we are still the world’s foremost military power.

But it is what we have done with that power that has set us apart from the rest of the nations of the world.

Yes, we have extended our borders for the 125 years following our founding but that ended at the dawn of the 20th century, and not due to the limits of our ability but by our own volition.

What followed was a period where the lives of tens of millions of people around the world would be consumed in sundry wars fought by nations seeking to extend their boundaries, seize natural resources, enslave foreign populations, and exterminate others.

So why did we participate in the major conflicts of the 20th century?

Partly self-defense but mostly for the liberation of others from their cruel oppressors.

What did we as a nation gain through our involvement in World Wars I and II, Korea, Vietnam, and Kuwait?

Not land or oil, but casualties and debt.

Yet we paid those dear prices without expectation of territory or even trophies (the Louvre, British Museum, and Pushkin Museum are repositories of war won booty).

But D-Day in particular stands out for it marked the beginning of the end of Nazi Germany and its brutal occupation of captive lands and peoples.

The success of the Normandy landings was hardly a sure thing.

Prime Minister Winston Churchill, haunted by the ghosts of Gallipoli from the previous world war, was consumed with doubt and anxiety over the prospects of a single massive amphibious operation.

And then there was the example of the disastrous Dieppe raid on the coast of northern France from two years prior that was easily repulsed by the German defenders.

Yet America marshaled her great resources of men and material, committing them to a risky and dangerous attack that was unprecedented in the annals of military history.

And they won the day, and thus put themselves in a position to win the war in Europe less than a year later.

American soldiers achieved a victory on June 6, 1944 that was great in every possible meaning of the word, enormous in scale, magnificent as a military feat, and good and selfless in its intent.

The only soil we have retained in Europe from World War II are the small parcels occupied by the remains of heroes who lost their lives to liberate not conquer.

Though Americans battled in villages and forests throughout western Europe in World War II no place is more sacred to our country than Omaha Beach, where our national might punched a hole through Hitler’s Atlantic Wall by racing across the sands in the midst of machine gun fire and climbing up the face of cliffs as hand grenades rained down from the ledges.

Though units from other countries were also involved in the Normandy landings, particularly Great Britain and Canada, there is zero doubt that Operation Overlord would have been possible without the United States.

So the next time the worst among our citizenry excoriates American greatness, ask them to explain D-Day.

Hopefully the world has finally come to place where America will never have to be great like that again.