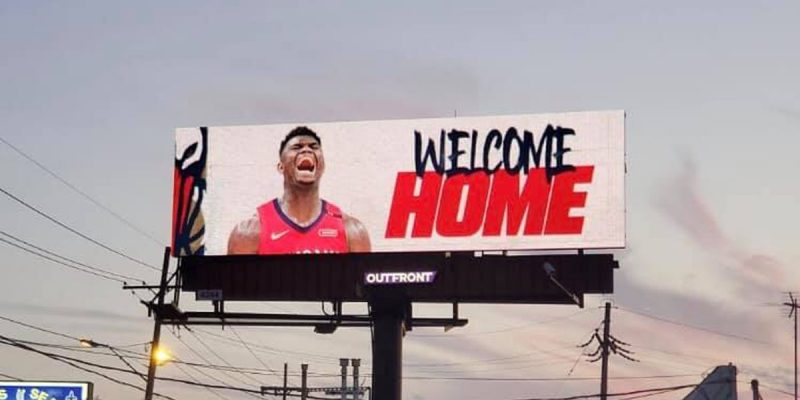 One of the most underrated sports movies in recent years is Draft Day, the chaotic football film starring Kevin Costner as the general manager of the Cleveland Browns who wheels and deals his way through what ends up as a bonanza of talent addition at the NFL Draft. In the film, Costner begins with the first pick in the draft and finds a way to finagle three top-flight rookies out of the pick.

That story was a bit like New Orleans Pelicans director of basketball operations David Griffin’s frenetic activity yesterday, when he parlayed the 4th pick in the draft, which he was sitting on after trading the malcontent star Anthony Davis to the Lakers for three players and a multitude of options which essentially have put the Pelicans in charge of the Lakers’ drafts for the next half-dozen years, into two future starters.

Of course, all of that is secondary to what was no surprise as the draft began last night: Zion Williamson is a Pelican. Here’s what a massive crowd assembled in Fulton Square in New Orleans thought of the pick when the Pelicans opened the draft with it…

Williamson has all the hallmarks of a generational player, one with the ability – unlike Davis – to make his teammates better and translate gaudy statistics to victories. Getting the first pick and the ability to draft him in the draft lottery last month was a massive stroke of luck that the Pelicans frankly haven’t had since the franchise moved to New Orleans.

But Griffin’s charge is to put as much talent around Williamson as possible, and further to stockpile assets for the future such that when Williamson’s rookie contract is up he sees the potential to win championships in New Orleans and opts to re-up with the team.

He’s done a decent job of that so far. The Davis trade had, before last night even began, netted a pair of likely starters in Brandon Ingram, who should take over at the “3,” and Lonzo Ball, probably the Pelicans’ point guard, plus shooting guard Josh Hart who should be a classic “3 and D” role player off the bench. All three of the young ex-Lakers will be heading into their third seasons in the NBA, and all have significant upside as complements to Williamson.

Plus Griffin had that #4 pick.

Of course, the 2019 NBA Draft was considered by many to really only have three sure-fire superstar players – Williamson, Murray State point guard Ja Morant and Williamson’s Duke teammate, wing R.J. Barrett. Beyond that point there were certainly good players available, but not to the extent that there was a true must-have at #4.

Which meant Griffin’s best move was to deal the pick. And that’s what he did, swapping it and the Pels’ last pick in the 2nd round (#57), together with underperforming Solomon Hill and his $12.8 million salary cap figure to Atlanta in exchange for the Hawks’ #8 pick, the #17 pick they’d had from the Brooklyn Nets and a 2nd round pick, the #35 selection. Atlanta also threw in a conditional 2020 first round pick they’d acquired from the Cleveland Cavaliers; that pick is protected if it’s one of the top 10 picks in the 2020 draft, though – if the Cavs aren’t outside the first 10 picks it converts to 2nd round choices in 2021 and 2022.

Anthony Davis has turned into:

And got rid of Solomon Hill's contract.

That’s as many as 10 or even 11 potential players out of trading one player whose contract is up at the end of the current season and was adamant that he wouldn’t be returning.

And then the Pelicans began drafting teammates for Williamson.

The problem with the 4th pick was that the two perceived best players available there were Virginia small forward DeAndre Hunter and Texas Tech shooting guard Jarrett Culver. With Ingram and Jrue Holiday on the roster and Hart essentially a backup to each, neither Hunter nor Culver were really good fits for the Pelicans’ needs – and with Lonzo Ball on hand, taking a point guard like Coby White from North Carolina or Darius Garland from Vanderbilt was a particular need either.

What Griffin needed more than anyone else was a center to replace Davis. At No. 4 it would be a reach to draft one. But at No. 8, Texas’ 7-footer Jaxson Hayes was a perfect fit – and that’s what Griffin did with the pick.

Hayes, who stood 6-0 as a sophomore in high school and had mostly been a football player, grew 11 inches in a little more than two years and became a blue-chip prospect. In his only year with the Longhorns he averaged 10 points, five rebounds and 2.2 blocks per game, shooting a blistering 72.8 percent from the floor and an encouraging 74 percent from the foul line. Hayes only averaged five shots per game, which was 7th-most on a team which went to the NIT (somebody needed to emphasize him a little more, perhaps), and his offensive game is underdeveloped – he’s a dunker and a low-post guy, and not much else. But Hayes blocked shots with less effort than practically anybody other than 7-6 Tacko Fall at Central Florida or 7-2 Bol Bol at Oregon in the college game last year, and his athleticism and upside make him a potentially perfect complement to Williamson in the low post.

And then at #17 Griffin found a player who could be the steal of the draft in Virginia Tech combo guard Nickeil Alexander-Walker. Alexander-Walker helps greatly to address the Pelicans’ deficiency of three-point shooters, having filled up 38 percent of his three-pointers in two years as a Hokie, and as a sophomore he led his team to a Sweet 16 with 16.2 points, 5.1 rebounds, 4.0 assists and 1.9 steals a game. Alexander-Walker shot a terrific 47.4 percent from the field and 77.8 percent from the foul line, adding a 37.9 percent clip from beyond the arc.

In the second round the Pelicans took a flyer on a Brazilian player, Marcos Louzada Sousa – a 6-6 swingman who likely figures as a draft-and-stash prospect but might have an opportunity on this year’s roster.

So in the aftermath of the draft, here’s what the Pelicans look like.

There are a number of other players currently on the Pelicans roster but not under contract – guards Elfrid Payton, Ian Clark and Trevon Blueitt, forwards Julius Randle, Darius Miller and Stanley Johnson, and center Cheikh Diallo. Some of those, perhaps most likely Diallo and possibly Payton, could be back.

But the Pelicans have something on the order of $32 million to spend in free agency – perhaps more, after Griffin traded the #39 pick in the draft to Cleveland last night for a future 2nd round pick and “financial considerations” which likely would involve freeing up more cap space.

With those resources it’s a good bet he’ll make a play for a post player who can displace Okafor, or at least rotate with him while giving Hayes time to develop. Orlando’s Nikola Vucevic is reported to be high on the Pelicans’ wish list, though Vucevic’s first priority is a new contract with his current team. That could mean taking a flyer on the Celtics’ Al Horford, who might be a good fit but for the fact he’s reportedly looking for a four-year deal at 32 years old and the Pelicans probably wouldn’t want to lock up the better part of $20 million that far out when lots of these young players would be up for second contracts.

Another option might be Enes Kanter from the Portland Trailblazers, who has always been a productive player but has never seemed to quite find a home in the NBA. Or perhaps Willie Cauley-Stein from the Sacramento Kings or Hassan Whiteside, though neither give the Pelicans the outside shooting they might want in a center to balance out the lineup. That means a former Pelican, Nikola Miritic, who’s a free agent after being traded midseason to the Milwaukee Bucks, might be a possibility; Miritic was highly productive in New Orleans and is a fantastic shooter. He wouldn’t command too much of that $32 million and might leave room for another quality free agent.

And the Pelicans could also use another wing, somebody who could defend the “3” off the bench and also shoot the lights out. The Bucks’ Khris Middleton, who averaged 18 points per game last year and is a 38.8 percent career three point shooter, could well fit that bill – though having made $13 million last year Middleton might want a bigger chunk of the remaining cap space than Griffin is willing to part with.

But what we know so far is that this franchise is under competent management and it’s picking up talent rapidly. There’s a reason that wild crowd assembled in Fulton Square last night – fans can tell the Pelicans are no longer a sad-sack club.