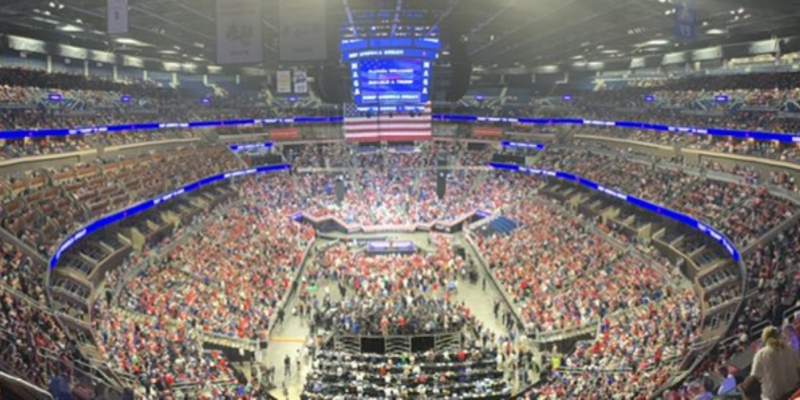 Nearly 20,000 people attended the Trump rally in Orlando, Florida– surpassing records of previous rallies, this time for his 2020 re-election bid. Attending a Trump rally is like swimming through a sea of dolphins– you’re unable to swim on your own but the dolphins carry you. It’s impossible to move but everyone around you is friendly and peaceful. When people bump into you they apologize. It’s a surreal experience to be surrounded by a sea of kind people. It’s also entertaining because Trump tells jokes.

Here are a few highlights from the event:

Melania Trump received praise and respect despite hatred spewed at her by liberals and the media:

FLOTUS said: ““He loves this Country and will continue to work on your behalf for as long as he can, all of us will.”

Sarah Huckabee Sanders received a lot of love as well. Fighting back tears she said: ““I’ve had the chance to be on the front row of history and watch you drastically change our country for the better.”

White House Press Secretary Sarah Sanders to President Trump: “I’ve had the chance to be on the front row of history and watch you drastically change our country for the better.”

“You’ve made America great… I couldn’t be prouder to be a part of your team.” pic.twitter.com/BKRCxIrKhZ