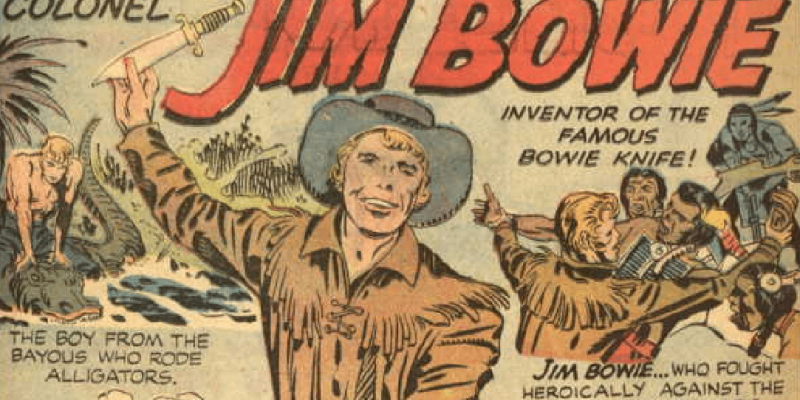 A Texan just learning how to walk in 2019 will be old enough to carry a knife as long as Jim Bowie‘s by around the time of the Texas bicentennial.

Between here and there, that’s plenty of time for the Texas Legislature to correct an error that led a “thinking Governor” to veto a unanimous resolution in honor of the legendary Bowie Knife.

In the meantime, just sit back and we’ll tell you a tale about a courageous fighter named Bowie, his world-renowned knife, a big brawl on the mighty Mississippi … and a not-so-big brawl at the Texas Capitol 200 years later.

On Saturday, June 15, Gov. Greg Abbott vetoed a Bowie knife resolution, which would have enshrined the legendary style of blade as the official state knife of Texas. Unlike a bill in the 2017 legislature which legalized the carry of all swords, machetes, spears, and knives (unless you’re a minor), this particular bill was a no-brainer and carried no change to existing law or threats to liberal attempts at forming a weapon-less utopia.

House Concurrent Resolution 86 received unanimous passage in both the Texas House of Representatives and the Texas Senate. But what poked at Gov. Abbott was a detail regarding which state the brawl that started the legendary status for his knife took place. The infamous “Sandbar Fight” near Natchez, Miss., in 1827 was in fact in Mississippi and not Natchez, La. (though the altercation happened near the state line). Both towns are small — Natchez, Miss., being a city located along the Mississippi River with a population of 15,792 and Natchez, La., as the smaller of the two burgs with 583 denizens and located further to the north and west in Louisiana.

But the state it took place in may not necessarily matter because the Sandbar Fight took place on (supposedly) neutral turf, on an amorphous sliver of mud between Vidalia, La., on the west bank and Natchez, Miss., on the eastern shore. The confusion may stem from the fact that Vidalia has an exhibit on the Sandbar Fight where the incident is a larger part of its civic identity. The fight itself owes its origins to Central Louisiana politics, so it’s not hard to see where someone might mistake the two Natchezes.

The wealthy Wells and Cuny families — who share a common lineage — were engaged in ongoing feuds with many of the region’s newer families. The fights between “new money” and the Wells-Cuny establishment involved everything from vote rigging and ballot box stuffing to bad bank loans — and eventually the honor of a young debutante. (If the reader knows nothing at all about Antebellum Southern honor, then please know that things got bad.)

Rather than continue these disputes any further into the public sphere, the gentlemanly thing to do at the time was duke it out. A muddy sandbar on the Mississippi was chosen, because, according to local lore, prior attempts at dueling or fighting risked becoming full-blown riots or triggering anti-dueling laws that attempted to stop the epidemic of honor-killings.

The primary fighters were Samuel Wells III and the “new money” Dr. Thomas Maddox, both of Alexandria, La. According to tradition, each of the primary duelers were allowed “seconds” as well as friends or supporters who would assure a fair fight. Bowie was there as a supporter of Wells.

On the day of the Sandbar Fight, Bowie carried a custom-made sheath knife in the event of any premature actions. Reason being: During a previous duel, Bowie was unfairly shot by a Maj. Norris Wright (remember that name) and not allowed to avenge his injury due to crowd activity. The knife was allegedly his backup plan to ward off any interference by the crowd this time.

The duel was conducted by formal rules of the time, with delays between exchanges of gunfire. Everyone survived the first round. As the primary participants prepared to celebrate (they even shook hands), a brawl broke out between the seconds and supporters.

During the resultant fight involving 12 grown men, Gen. Samuel Cuny (on the Wells side) and Maj. Wright (yes, the same Norris Wright that shot Bowie before — small and scrappy world) were both killed. Bowie and Maddox partisan Alfred Blanchard received severe injuries. The others walked way with barely a scratch.

Here’s where Bowie became famous. During the brawl, Maddox fighter Col. Robert Crain, shot Bowie in the hip, knocking him to the sandy-rocky ground below. Bowie, rising to his feet, charged at Crain striking him with an empty pistol so hard that it broke in two. Wright took a shot at Bowie (missing him this time) and took out a sword-cane (!) to stab Bowie in the chest. The cheap blade broke on Bowie’s sternum, whereby Bowie was shot in the arm by other brawlers.

Bowie, not exactly the sword-cane type, reached into his shirt, grabbed his now-famous knife, and started spinning it with such prowess observers remembered his knife-wielding skill and told stories about it. Bowie managed to cut off Blanchard’s forearm and stab Wright in the chest, thus ending the 90-second melee.

Bowie, severely injured, was carried away by Crain who had a few minute ago shot him in the hip. Now that’s Southern honor.

Bowie’s miraculous survival was followed by Bowie wearing his large knife and sheath prominently as a deterrent (an early advocate of Open Carry, for sure). The legend of the fight spread so quickly that knives styled after Bowie’s became a relatively common fixture and an icon of frontier ruggedness. The Bowie Knife has had many alternative names of the decades: “Arkansas Toothpick,” the “Texas Toothpick,” and the “Rio Grande Camp Knife.”

Bowie later moved to Texas, married into wealth, searched for a silver mine, lost his new family to cholera, and became a leader in the Texas Revolution. He died during the Battle of the Alamo, where some depictions of the battle have him swinging his trademark weapon at Mexican imperial forces. But the likely truth is that Bowie, who had a severe illness, emptied out as much gun ammunition into approaching soldiers as he could while in bed until the moment of his death. The enduring image of Jim Bowie is that of Alamo defender, which may be why “Louisiana Toothpick” never stuck. Go figure on the Arkansas Toothpick moniker.

At a museum hosted in the Alamo’s extant Long Barrack, a remnant blade is displayed as an example of what that knife could have looked like. According to Blade magazine (yes, there is such a thing) the coffin-handle Bowie-esque relic may have been a part of a Black Knife (without a guard, among other differences) and not a true Bowie Knife. How the original Bowie Knife appeared may be lost to the sands of time.

The disputes and discrepancies of the legendary Jim Bowie continue, and may continue to be disputed until the 87th Legislature when a corrected resolution is drafted. If it does, we advise that any duels not take place in the middle of the Red River (Oklahoma owns the title to all land up to the natural gradient under a treaty between the U.S. and Spain). And the politics of the Rio Grande may render finding neutral turf to be even more difficult. On second thought, maybe the Texas Capitol is the best place to settle it.

Interested in more news from Texas? We've got you covered! See More Texas News
Previous Article One of the best videos you’ll ever watch [video]
Next Article Highlights from Trump’s historic 2020 announcement in Florida [videos]