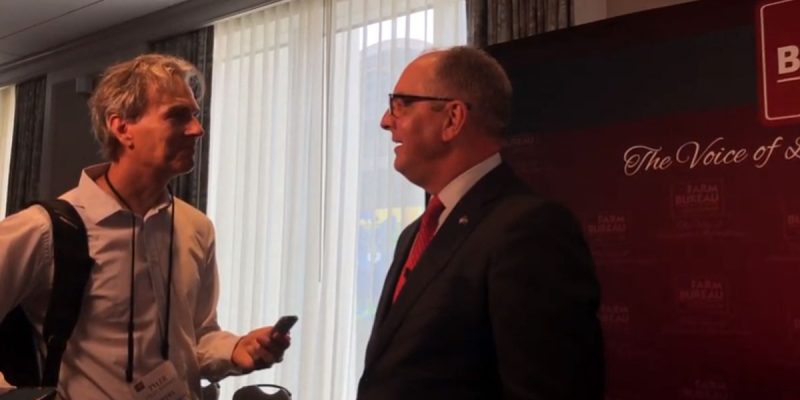 Here’s a fun piece of video Gov. John Bel Edwards’ camp probably wouldn’t want out in the public domain. Asked by a reporter on Friday after Edwards gave a speech at the Louisiana Farm Bureau convention in New Orleans about his signing of the fetal heartbeat abortion bill this year, which has emerged as a quite controversial piece of legislation within his own Democrat camp, the governor dropped what can best be termed a classic gaffe.

Edwards, of course, has maintained that signing that bill wasn’t a political thing, as doing so satisfied deep-seated convictions he’s boasted of for a long time. Except this doesn’t really sound like it’s “not political,” right?

Why is this something? Let’s remember that Edwards received a rather intensely negative reaction from national Democrats after he signed that bill – as evidenced by a sampling from Twitter…

If John Bel Edwards wants to make the government force a girl violently raped by her own father to carry that pregnancy out to term and give birth, then he does not deserve any Democratic support. #LAGov https://t.co/POd3wYWvZv

Vibes. To anyone suggesting I should vote for a man who would force me to carry my rapist’s baby just because there’s a (D) next to his name:@LaDemos #lalege #LaGov pic.twitter.com/IVWqXxeSxk

And the mother of them all…

Regardless of your personal beliefs, no politician—Republican or Democrat—has the right to control women’s bodies or involve themselves in women’s health care decisions. Governor John Bel Edwards is turning his back on Louisiana women by signing this shameful bill. https://t.co/PdObQ2JZCT

So when the abortion issue continues to percolate, and everyone knows it’s terrible politics within the Democrat Party to be pro-life – that party’s own leadership has proclaimed it a “100 percent pro-choice party” – what Edwards wants and needs is to tamp the issue down before it runs off a big chunk of his base (something it’s very obvious he’s concerned about).

Do you think that goal gets served when Edwards flippantly asserts that he’s won re-election based on signing a bill that – in the words of the pro-abortion crowd – makes it illegal to have an abortion as early as six weeks into a pregnancy? Or do you think that might have the effect of poisoning a sizable chunk of Edwards’ voting base which is solidly pro-abortion?

What’s more, in making that assertion that he could win re-election because he stood with a large majority of Louisianans on a bill which, with 31 votes in the Senate and 79 in the House, could easily have withstood his veto on an overturn, one wonders what message Edwards sends to the state’s social conservatives. The implication he’s giving is that all those voters really care about is abortion and not the wide range of other issues in which Edwards and the majority of Louisiana’s social conservative voters don’t see eye to eye at all.

Not to mention pro-life voters in the state who are also economic conservatives or small-government people, or even anti-corruption advocates – none of whom Edwards has a good record with. If you think people fitting those descriptions who might be on the fence about Edwards are going to like the idea that he can just assume he’s recaptured them for this fall because he signed a pro-life bill that was going to become law no matter what he said, you’re probably not paying enough attention. They’re not going to like being taken for granted.

In all, this is a pretty sizable fail on Edwards’ part. We imagine this video will get seen a good bit.