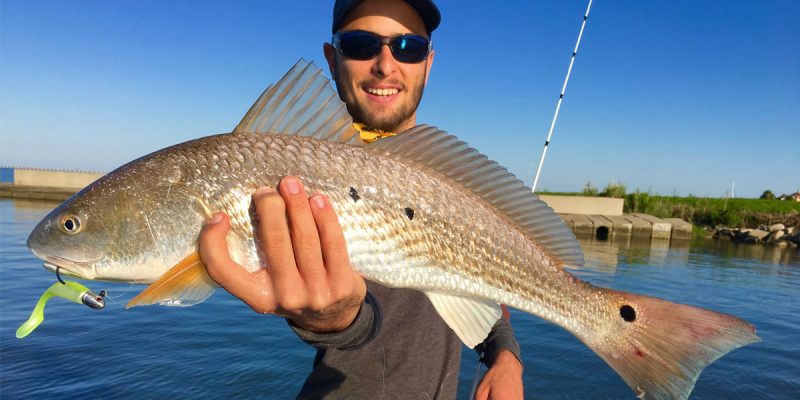 Lake Pontchartrain is fresher than a loaf of bread straight out of the oven, and that means it’s as hospitable to spawning summertime speckled trout as a Walmart parking lot. But redfish love the bait pouring through the wide-open Bonnet Carre Spillway, and are thriving in the legendarily productive water body.

My son, Joel, and I set out on a quick trip close to home to see if we could find the reds that have been so abundant along the north shore of Lake Pontchartrain. Though it took us a while, we finally succeeded by targeting the reds in a community hole that’s often productive. The action that followed was fast, and greatly satisfying.

The fish were directly on the bottom of the double-digit-deep channel, and they were moving in schools. The bites came in groups, sandwiched between slow periods that lasted five to 15 minutes.

The tide was falling, and winds were light out of the northwest. Despite the volume of muddy river water flooding the southwest corner of the lake, the north shore featured some spectacular water and copious amounts of bait. In the area we caught the fish, however, the water was moderately stained and little bait was visible.

Like the video? Please give it a thumbs-up, and subscribe to the Marsh Man Masson channel on YouTube. Also, leave a comment below or on the YouTube page. How has all this fresh water altered your fishing strategies this summer? Are you doing different things than you’d normally do? Have you turned your attention more to redfish or other species rather than speckled trout?

Interested in more news from Louisiana? We've got you covered! See More Louisiana News
Previous Article SADOW: A Louisiana Passenger Rail Experiment That Might Pay Off
Next Article John Bel Edwards Is Taking On The Look Of A Desperate Man