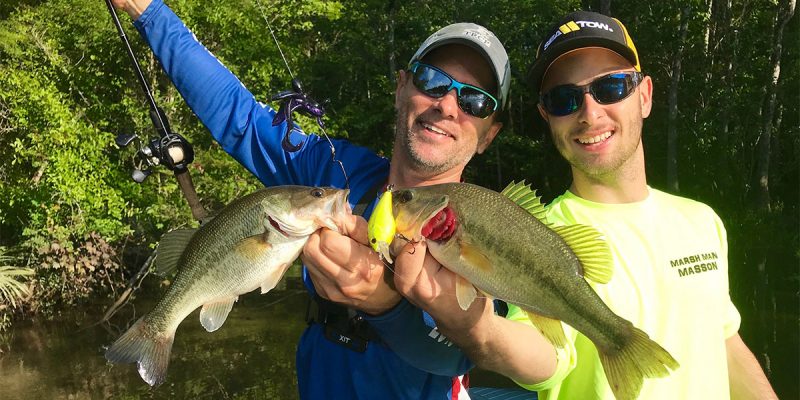 South Louisiana is awash in fresh water right now, thanks to monumental rainfall in the Midwest that has funneled down the Mississippi River and barreled it to record heights. The repeated deluges have forced the U.S. Army Corps of Engineers to open the Bonnet Carre Spillway for the second time this year, filling area marshes, bayous, lakes and bays with muddy fresh water.

The fishing will eventually be great as a result, but not until at least this fall.

Ironically, however, the local weather scene has been drier than Saharan Africa. Well, for at least the last couple weeks.

That’s allowed smaller rivers to retreat from their spring highs, pulling bass and panfish from the backwaters and concentrating them within the river banks.

So rather than making a long run through sweet water to try to catch spawning speckled trout, I teamed up with buddy Jeff Bruhl and son Joel to take what the conditions were giving. We launched Wednesday into the clearing waters of the lower East Pearl River, and hunted for drains that were sucking out baitfish, bass, bream and more.

The empty parking lot at the launch showed we were early in the process, but we still managed to catch fish throughout the trip, and conditions are improving almost by the hour, according to Bruhl, a Pearl River veteran.

He says the action reaches its peak when the Pearl River gauge at Pearl River, La., falls below 10 feet. It crossed that threshold Friday, and should remain at low levels until the Central Mississippi receives its next significant rainfall.

Like the video? Please give it a thumbs-up, and subscribe to the Marsh Man Masson channel on YouTube. Also, leave a comment below. Has all the fresh water pushed you out of your usual fishing grounds?

Interested in more news from Louisiana? We've got you covered! See More Louisiana News
Previous Article Toward The End Of A Brutal Season, It’s Time To Give Paul Mainieri His Due
Next Article ICYMI: Imagine waking up to this in your kitchen