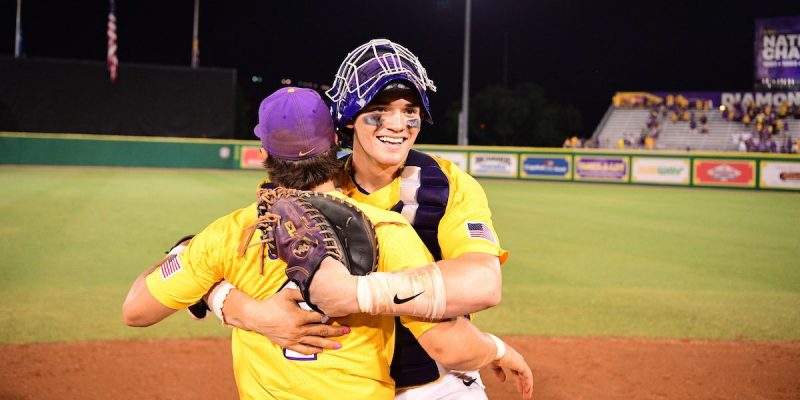 LSU Baseball hasn’t had a banner season to date. Not even close. But after last night’s 6-4 win over a scrappy Southern Miss team vaulted the Tigers into an NCAA Super Regional, which LSU will host thanks to Florida State’s domination of Georgia in Athens over the weekend, it seems Tiger head coach Paul Mainieri has his team on track to hit its main goal for the season.

Mainieri is two wins away from the College World Series in Omaha, which is not something this team showed much evidence of for most of the season.

As we all know, LSU was ranked No. 1 in the preseason by multiple polls. It made sense to rank them that way. At the time Mainieri noted that he felt like he had three different signing classes coming together to boost his team – he had the top-rated recruiting class in the country coming in, he had two players in Eric Walker and Josh Smith returning from having missed the entire 2018 season due to injuries and he had some unexpected returning players in Antoine Duplantis, Zach Watson and Zack Hess passing up pro offers to stick around for another year. Add that to a decent core of players set to return and LSU looked loaded for 2019.

Except almost nothing this season has gone according to plan.

Personally, it’s been a tough year for Mainieri, having lost his father – legendary coach Demi Mainieri – early in the season. The two were very close and his father’s passing clearly weighed on LSU’s coach for much of the season. That made a difference on the field, as this team for stretches of the season has lacked some of its usual joy and swagger.

And from the beginning, this team dealt with injuries. Four pitchers – Caleb Gilbert, A.J. Labas, Nick Storz and Easton McMurray, the latter being the only left-hander on the whole pitching staff – never took the mound for the entire season due to arm problems. Multiple others were in and out of the training room with similar maladies; freshman stud Jaden Hill put together two sensational starts to open the season and then went on the shelf for the rest of the year and now faces surgery. The injuries affected the starting lineup as well – catcher Saul Garza, who turned out to be perhaps LSU’s best hitter, had knee surgery in the fall and didn’t come back to full strength until April, and several other key contributors (Watson, Daniel Cabrera, Gavin Dugas and Brandt Broussard among them) spent time on the bench with various ailments.

Things got so bad that at times during the season Mainieri didn’t have enough healthy players to even fill a travel roster. At one point he was down to only 23 healthy Tigers.

That mattered to this team. After rattling off eight straight wins to open the season, LSU got swept by a Texas team which didn’t even participate in postseason. A week and a half later the Tigers lost a midweek game to Northwestern State – the first of five midweek losses to in-state teams which resulted in a sub-.500 record on the season against Louisiana opponents. LSU, in fact, didn’t win a road game until March 22 at Georgia – its fifth shot at doing so. The Friday win over the Bulldogs was followed by two losses in Athens, and then a home loss to McNeese State and then another loss at Mississippi State, a four-game losing streak. LSU did pull out of that nose-dive to win two straight in Starkville and take the series, touching off a five-game win streak. But just when it looked like the team was rounding into form, along came another nose-dive.

LSU traveled to Lee Hines Field across town for what should have been an easy game against a Southern team the Tigers had clobbered 17-4 early in the season. But Landon Marceaux, who looked good in a pair of early starts and was then shut down for arm soreness, was making a starting appearance coming back from that condition and got rocked on the Bluff, and LSU’s offense completely disappeared in a shocking 7-2 loss. A road series at Missouri netted just one 10-inning win before LSU would lose four straight games again – culminating in an ugly 16-9 blowout loss at home to Florida.

Again, though, the team rallied. LSU paid the Gators back for their Friday romp with 13-1 and 11-2 routs of their own, beat Lamar in a midweek game and took two of three at Alabama.

But that didn’t last. After an impressive 8-3 win over Ole Miss at home, LSU lost a 5-1 game and then a 19-15 extra-innings slugfest in the finale to mark the first time since before Skip Bertman took over the program that the Tigers had lost a home series to Ole Miss. Three more losses would follow – an ignominious 12-2 roasting by Louisiana Tech at Alex Box Stadium, and two ugly losses at Arkansas to open that series. It looked like LSU was about to be swept by the Hogs, but in the 8th inning down 2-0 Antoine Duplantis parked a home run into the right field bullpen to salvage a 3-2 win and give the Tigers some badly-needed late-season momentum.

Duplantis’ home run keyed a four-game win streak which carried LSU to the third game of a home series against Auburn to close the season. And it looked like the Tigers were going to close out the regular season with a sweep of the Plainsmen, but Hess – who opened the season as the Friday starter and ultimately had to surrender that role to be the closer he was as a freshman in 2017 – blew a save opportunity by giving up a two-run homer with a 4-2 lead, and LSU lost that game 5-4 in 11 innings.

The Tigers closed the regular season 34-22, 17-13 in the SEC. It was a resume that likely would have put the Tigers as a #2 seed, traveling to an NCAA Regional.

But Mainieri got his team to elevate their performance at the SEC Tournament as he so often does, and with three wins in Hoover, including a 12-2 run-rule blowout of Mississippi State to gain revenge after a 17-inning loss earlier in the tournament, it was enough to get a regional #1 seed and a chance to host at Alex Box Stadium.

And LSU took advantage this past weekend, crushing Stony Brook 17-3 in the opener, then posting 8-4 and 6-4 wins over the Golden Eagles. And in a spot of good fortune, third-seeded Florida State shocked Georgia with two blowout wins in the Athens Regional, setting up a super-regional at LSU against retiring Seminole coach Mike Martin and his emotional team. Florida State might be a club on a mission to send their coach out as a winner, but for Mainieri the chance to play postseason at home trumps all – in regionals and super regionals at home LSU has emerged as champions 22 of 26 times, the best record of anyone in all of college baseball.

Is Mainieri’s team red hot at present? Are they playing their best baseball? It’s debatable. The Tigers went 3-0 in their regional, to be sure, and Marceaux and Cole Henry now look like a 1-2 punch in the pitching rotation which can compete with anybody. Offensively, though, they’re not really hitting on all cylinders – Garza looks like the player he was hoped to be when LSU signed him out of junior college, and Broussard seems to have come around a bit, and Josh Smith has been terrific, but the hitting hasn’t been all that timely.

And while Marceaux and Henry have been great, Walker is still struggling to return to his freshman form. He’s not a power pitcher and his fastball is never going to light up a radar gun, but while Walker would sit at 88-89 MPH before his injury two years ago he’s more of an 85-86 MPH pitcher now. And the second time through the batting order is starting to become an adventure for him, which is troublesome in the event LSU should face a Sunday game against Florida State or have to go through the loser’s bracket in Omaha.

But the bullpen is solid. In Hess, Todd Peterson, Devin Fontenot, Mikhail Hilliard, Matthew Beck and Trent Vietmeier Mainieri has a deep group each of whom can extend innings if necessary, and in particular Hess, Peterson, Fontenot and Vietmeier can blow 95-MPH fastballs past hitters with impunity. LSU is also a solid defensive team.

And while the regular season record was below LSU’s standard, Mainieri can now say that’s all in the past – because he’s got a team hosting a Super Regional at Alex Box Stadium for the sixth time in the last eight years. And that means this team is still very much alive to fulfill that preseason No. 1 ranking.

And you can’t ask for much else this time of year.