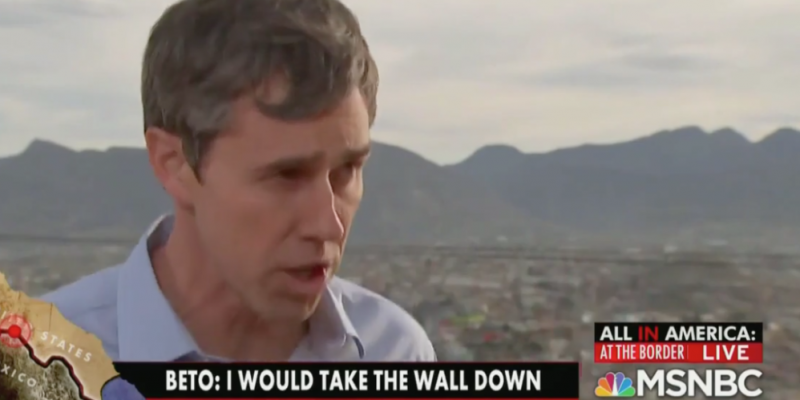 Sadly, Robert Francis O’Rourke has not gone away. He’s still campaigning, this time for president. And part of that plan is to tear down the existing 700 miles border wall. Well, that depends on the local community, he says now.

So it’s not a national security issue, or federal immigration policy, it’s a local issue, according to O’Rourke.

Having an open border is part of his plan to “overhaul the American immigration system.”

O’Rourke wants to offer U.S. citizenship to most illegal aliens already in the U.S.– and new visas for more refugees.

“I think we go a lot further than really anyone in this plan,” O’Rourke told CNN in an interview. “We stop the chaos that we have on our border right now — chaos that was imposed by President Trump.”

At one point earlier this year he’d said he would consider tearing down parts of the 700 or so miles of fencing and barriers that already protect the U.S. border — including miles of barriers in his hometown of El Paso, Texas.

O’Rourke says his administration would ensure there are “lawful and humane conditions” at U.S. Customs and Border Protection (CBP) facilities, including access to medical treatment, mental health care, social workers and translators, his campaign said.

Newsflash: these things already exist, courtesy of the U.S. taxpayer. Illegals also get free housing, free food, and free medical care– in many cases more than and better than what veterans and seniors receive.

O’Rourke’s campaign also said if he were elected president he would issue an executive order requiring detention for illegal aliens “with criminal backgrounds representing a danger to our communities.”

He would also invest $5 billion of U.S. taxpayer money into the “Northern Triangle” region of El Salvador, Guatemala and Honduras, to slow the surge of migrants heading north from Central America.

Immigration officials argue the opposite. Detaining illegals is the best way to slow the surge.

Border Patrol leaders testified to Congress that without detention, many illegals will miss their hearings and disappear into the shadows, adding to the growing population of illegals in the U.S.

O’Rourke doesn’t have a chance of becoming president. In the worst case scenario that he did, Congress would have to approve his plans. However, Congress has failed for decades to pass any meaningful or comprehensive immigration reform.