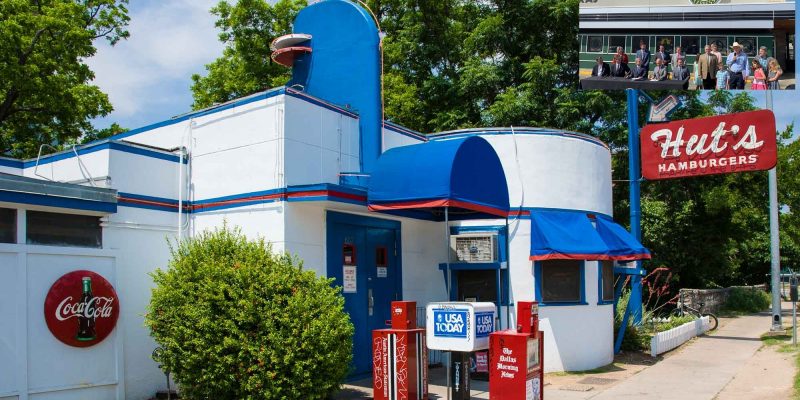 The biggest economic news in Texas this week involved a tale of two hamburger stands.

In the heart of booming Austin is Hut’s, a longtime favorite since 1939 and soon to be closing its doors due to changing demographics in the capital city of Texas and a drop in sales of nearly 40%.

And to the north a few miles there’s Wally’s Burger Express, owned by a family restaurant enterprise whose taxes jumped 80% in the past three years.

Gov. Greg Abbott signed the property tax trigger and reform bill SB 2 on Wednesday in Wally’s parking lot. According to the Fort Worth Star-Telegram “Robert Mayfield, the owner of Wally’s Burger Express, said that in the past year, his own property taxes increased by … about $8,000. Without this legislation, Mayfield said he wasn’t sure how long he would be able to keep his family-owned restaurant open.”

There was a dark spot to Wednesday’s festivities: the tax reforms passed represent a “slow down” rather than a tax cut — a point made subtly by Sen. Paul Bettencourt (see below in article for his comments, with emphasis ours).

The cost of living and doing business in Texas is still accelerating, and no where was that more apparent than in downtown Austin where residents and small business have slowly been replaced by vertical developments and by large corporations. A large part of this may be market-driven, but the owners of Hut’s closed their other nearby Italian restaurant Frank & Angie’s in November 2018 due to “general affordability” disappearing from the burgeoning area now dotted with condo towers and chain boutiques. A liquor store on the same plot is also closing at year’s-end.

SB 2, part of a tax reform package that provides $5.1 billion to slow-down property tax increases, may help stop the bleeding and keep hangers-on like Wally’s in business.

SB 2 requires most cities, counties, and other taxing jurisdictions to automatically host an election if they propose a tax hike representing more than a 3.5% increase. Schools have a slightly lower “tax trigger” of 2.5%. This cap excludes taxes on new construction, which may be averaged together over three years to allow local jurisdictions to exceed 3.5% during periods of rapid economic and population growth.

Since the early ’80s, there has been an 8% cap in place, but voters had to themselves petition for what’s known as a “rollback election” if the cap was exceeded. Hospital districts, community college districts, and certain special taxing areas with rates under 25 cents per $100 valuation will still be subject to that same 8% trigger rate under SB 2.

Despite the victory lap done in the Wally’s parking lot by key players, missing was Sen. Bettencourt, one of the primary proponents of the bill but who vociferously opposed the Big 3 (Governor, Speaker, and Lieutnant Governor) on whether to include a penny sales tax hike to help buy-down local property taxes. Bettencourt got his way — but longtime ally Lt. Gov. Dan Patrick said at the ceremony he denied Bettencourt’s absence was anything personal. Bettencourt said in a statement he was invited to a signing of HB 3 (the school finance component of this session’s tax reform) at an elementary school in nearby Pflugerville.

On the bright side for small businesses like Hut’s and Wally’s: Bettencourt said in his statement that 31 out of the 36 proposals fielded by the legislature’s Texas Commission on Public School Finance are now law:

“As for property tax relief, HB 3 has [$]5 billion set to go back to 7 Million taxpayers across Texas in the next two years, and more in future.

“Combined with SB 2 being signed into law, this will cover both parts of your property tax bill. The ISD part in HB 3, and SB 2 will slow the rate of growth of property tax bills for Cities and Counties to the tune of 980 Million dollars by 2024 by LBB estimate.

“This is a clear culmination of years of public testimony to the Senate Property Tax committee where Texans made the case for needed reforms.

“Finally the law will be changed for the first time in 38 years bringing meaningful property tax relief that as values go up, property tax rates must come down, plus actual ISD tax rate cuts and appraisal reforms …

But it may be too late for Hut’s, where another condo tower is rumored to be built soon.

From the hip: The owners of Hut’s insisted to several local news outlets that it was not because of rising rents by the landlords but that traffic into the restaurant had declined, despite its iconic status among Austin’s notable eateries. Local observers have pointed out that tax schemes such as dedicated express bus lanes, toll lanes, light rail that stops in out-of-the-way places, back-in parking along streets, and a general war on cars that dates back at least half a century have cut down on commuters wanting to head downtown for dining. Even in the central part of the city, a lunch break to Hut’s from a few blocks away is a commitment of over an hour. Meanwhile, the city continues to spend taxpayer funds to attract large tech companies which often provide their own cafeterias and entertainment to workers, thus contributing to the disappearance of the great American lunch break from the business scene. There’s also the matter of tuition de-regulation at nearby University of Texas, which sent tuition and fees skyrocketing and thus changing the entire vibe of the college town from one of beer and pizza to wine and tofu. One may argue the cultural end of that cannot be fixed by tax reform, but it’s worth pointing out that prior to 2005 the Texas Legislature reined in tuition at all state universities, but gave up that responsibility.

Interested in more news from Texas? We've got you covered! See More Texas News
Previous Article SADOW: Don’t Look For Much In The Way Of Savings From Criminal Justice Reform
Next Article American could have relief from AOC if this guy runs against her [audio]