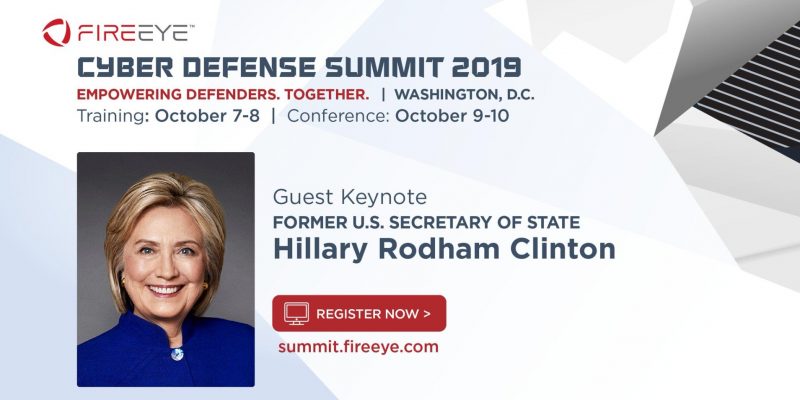 Many social media users thought it was a joke, or satire, but former Secretary of State and failed Presidential candidate Hillary Clinton will indeed be the keynote speaker for the “Cyber Defense Summit 2019”.

“We are pleased to announce that Former U.S. Secretary of State Hillary Rodham Clinton will be a featured keynote at our #FireEyeSummit in October! Secretary Clinton will engage in an intimate Q&A keynote discussion with Kevin Mandia.”

For those who may have been living under a rock, the irony is palpable given that Clinton was under federal investigation for compromising top secret emails while serving as Secretary of State.

In a recent public appearance, the former First Lady made a statement that is sure to receive eye-rolls, she seemed to claim that the 2016 election was “stolen” from her when last month she said,

“I think it’s also critical to understand that, as I’ve been telling candidates who have come to see me, you can run the best campaign, you can even become the nominee, and you can have the election stolen from you.”

It is safe to assume she was alluding to the much-discussed Russian attempts at interference or former FBI Director James Comey’s informing the American people about the reopening of the investigation into Clinton’s private email server.

In a separate interview on the podcast “Unredacted”, Clinton went into more detail when she said,

“I’ve met with more than half the candidates. I’ve told each of them something I really believe, which is that you could run the best campaign, you could get the nomination, and you could lose because of factors beyond your control, like voter suppression, like hacking and weaponization of information, like propaganda on social media, like interference with the actual machinery of the election.”

However, it is interesting that all this time later her resentment has metastasized into being brazen enough to further undermine her legitimate and overwhelming loss. It is simply one more example of the left’s continued disassociation with reality.

Interested in more national news? We've got you covered! See More National News
Previous Article Abraham Campaign Releases New Poll Showing Him Tied With JBE
Next Article Will it take a businessman to turn things around in Louisiana?