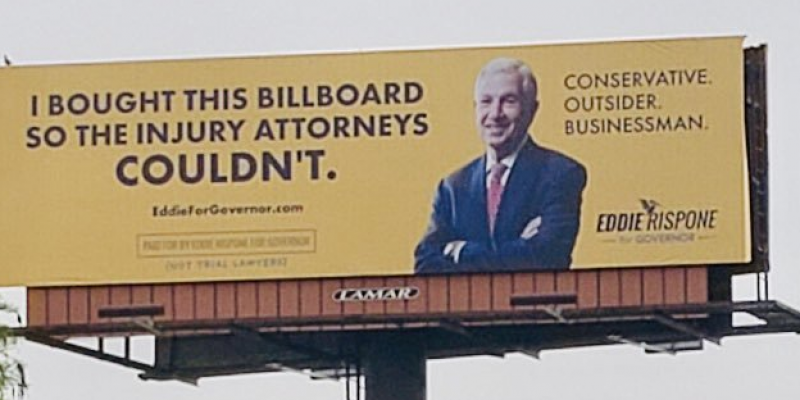 If you haven’t seen it, Republican Eddie Rispone’s first ad buy in the Baton Rouge area is hilarious. It’s a nod to the bombardment of trial attorney ads in the state.

(The trial lawyer and legal services industry spent $15.6 million for an ad to air every minute, on average, in New Orleans, Shreveport, and Baton Rouge, according to a new report by the American Tort Reform Association (ATRA).)

Within three months of announcing his candidacy Rispone says he put over 10,000 miles on his truck and made 50 campaign stops. He says a few things stood out from his travels:

“the outpouring of support, just how great my yard signs look against the wonderful Louisiana scenery, better than expected gas station food, and how many yellow personal injury billboards I’ve seen.”

He says the most frequent question he’s asked is: “why is Louisiana always ranked last?” Louisiana is ranked 47th in healthcare, 48th in public safety, 49th in education, and dead last in opportunity, Rispone says, referring to several national rankings and studies released over the years.

“We’re at the bottom of all of the good lists and at the top of too many of the bad ones,” he says. “Our lawsuit environment is killing jobs. Our citizens are over taxed. Too many of our children are trapped in failing schools. Louisiana should be the best state in the south for jobs and opportunity. In my over 40 years in business I have traveled across the country and know Louisiana can compete.”

Rispone, who has a $10.4 million war chest that hasn’t been spent yet, argues Louisiana needs an outsider, a self-made man, and someone who know how to make Louisiana great.

He says, “If you look around the country you see that voters are turning away from the same old tax and spend career politicians, and turning to leadership–conservative outsiders with serious business backgrounds–to solve the problems left by career politicians.

“Doug Ducey in Arizona inherited a $1 billion deficit and balanced the budget in his first year…without raising taxes. Pete Ricketts in Nebraska is breaking state records for new jobs and employment, climbing up the rankings of fastest growing states for tech jobs. And last year, here in our backyard, Tennessee elected CEO Bill Lee, a conservative outsider who ran against two politicians, and pledged to shake up the establishment.

“And I don’t need to remind you again who is in the White House.”

Will it take a businessman to turn Louisiana’s economy around?

Rispone cofounded ISC Constructors with his brother from scratch, which now does roughly $350 million worth of business every year. Headquartered in Baton Rouge, ISC Constructors is one of the largest in its industry in the Gulf with offices in Beaumont, Houston and Lake Charles.

The Eddie L. Rispone Foundation has a balance of $15.4 million at 2017 year end. From 2012-2017 he and his wife distributed nearly $8 million, according to tax records, NOLA reports. He and his late wife, Phyllis, created the foundation, which donates the bulk of its money to Christian organizations. The organization is run solely by Rispone and his current wife, Linda.