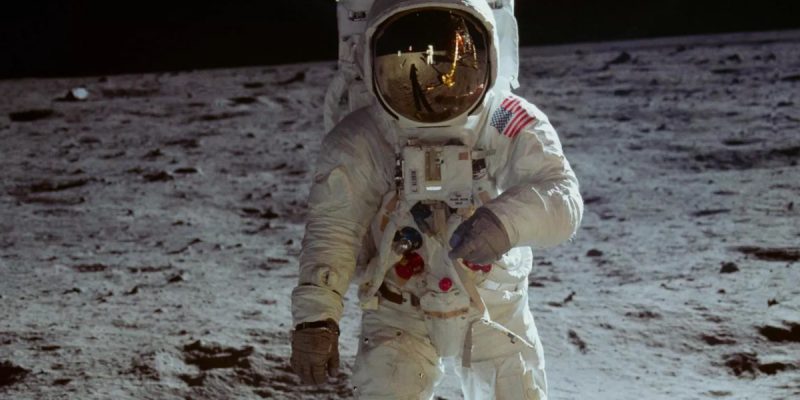 Landing men (or humans pending on how you view every aspect of the world) on the moon remains the greatest accomplishment in all of exploration.

The race to another planetary surface was both a scientific achievement and a national endeavor that truly encapsulates American exceptionalism.

Particularly as the United States remains the lone country to do this in the past half-century.

President Kennedy eloquently threw down the challenge to his government and countrymen and though he would not live to see the US flag planted upon the lunar surface, the moonshot remains JFK’s most enduring legacy.

The two astronauts who fulfilled the goal, Neil Armstrong and Buzz Aldrin, were assisted by hundreds of thousands of scientists, engineers, construction workers, welders, and other skilled craftsmen whose fingerprints were left on some aspect, seemingly small yet significant, of the Apollo 11 mission.  It was a national endeavor that was only possible in a country that possessed not just an abundance of resources but a free society centered around the pursuit of excellence rather than politics.

On July 21, 1969 the New York Times front page ran the headline “Men Walk On Moon”.  Now the Gray Lady is singing a different tune running an article on the fifty year anniversary of moon landing that celebrates how the Soviet Union Won the Space Race for…wait for it…Equality.

Da.  They really did that.

Sophie Pinkham (seriously with a surname like that attached to the article I had to verify this wasn’t a prank by The Onion) gushed how under socialism a “person of even the humblest origins could make it all the way up” and touted how the country that had sent tanks into Hungary and Czechoslovakia and too many other crimes against humanity to list here had sent women and non-whites into space long before the United States.

Well that’s great for Cosmonaut Valentina Tereshkova but some how I don’t see how that eclipsed anything from Apollo 11, especially since I am sure 95% of the individuals responsible for blasting the first human with a womb into orbit were men (both by birth and self-identity).

So as it took a village (or laboratory and manufacturing facility) of men across Russia to build and launch a rocket into space, how has Tereshkova really accomplished anything for women beyond being placed inside a capsule by old white men in the Kremlin (who made the political decision)?

Nikita Khrushchev, the man who brutally put down the Hungarian uprising and parked nuclear missiles in Cuba across from Miami, was woke enough to ensure that the Soviets would HAVE to put a woman in space before the Americans.

Ms. Pinkham then goes on to herald the sending up of a Vietnamese air force pilot who allegedly shot down a B-52 and a Cuban of African ancestry, checking off two additional diversity boxes before the United States.  Mon Dieu!  The national shame!

Obviously these individuals found their place in space (or more honestly, were put in place in space) for political reasons, crash-trained for the job of being orbiting tourists to achieve a propaganda end that did not delay the collapse of the Iron Curtain five minutes.

In contrast Sally Ride, the first American woman in space, was a doctor in physics.  Science was her profession, not a temp assignment, and her qualifications went far beyond her anatomy.  To her credit astrophysicist Ride saw herself as an astronaut, not a national check box.

Ms. Pinkham should make a point of reading about another cosmonaut, whom I consider the patron saint of “what can go wrong, will go wrong”, the late, lamented Vladimir Komarov.

The cosmonaut was to command Soyuz I though Komarov and his brother cosmonauts protested the mission as the space vehicle was seriously faulty. But the Soviet brass did not care.  The launch must go on. Knowing he was a condemned man and accepting his fate, Komarov requested an open casket at his funeral.

Komarov’s mission was a disaster from the start but after beating the odds and manually managing to get his craft to reenter the Earth’s atmosphere the cosmonaut’s fate proved unavoidable as his capsule’s parachute to fail to deploy.  As he plunged towards death, Komarov screamed and cursed at those responsible for his predicament, perhaps the most decorated Soviet to do so and still receive a Kremlin wall interment.

Komarov’s last laugh was a photo of a bunch of Soviet big shots looking as if they were about to vomit before the cosmonaut’s charred remain, a heel bone- the bitter harvest reaped with having a politics-oriented space program.

For the loudest voices in our modern society, political conformity, and not excellence and achievement, represents the ideal end.

Thankfully America and the media were saner 50 years ago.