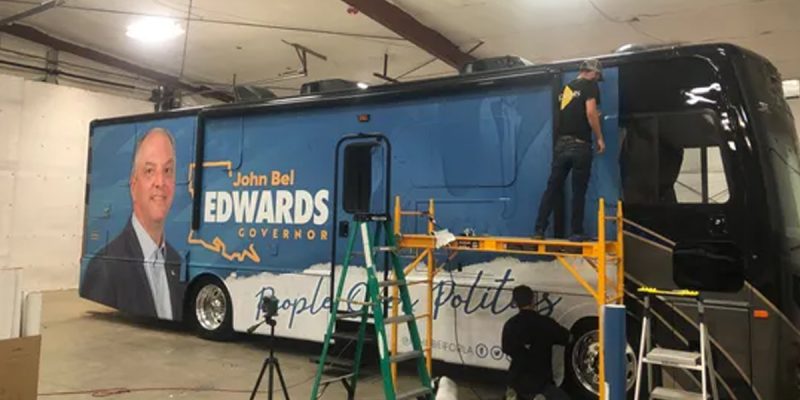 Following the conclusion of a legislative session known mostly to the public for its failure to address important issues like auto insurance rates, Louisiana Governor John Bel Edwards is hitting the road for a statewide RV re-election tour. Edwards did a similar tour in 2015 running against David Vitter for the seat he currently holds. In what is shaping up to be a hotly contested election, Edwards has yet to reach 50 percent in any poll against Republican challengers Ralph Abraham and Eddie Rispone, either in a three-way primary or in head-to-head matchups.

In a state that elected President Trump with a staggering 58% of votes, Edwards is struggling to keep his moderate democrat appeal. Haunted by enormous tax hikes, owing favors to trial attorneys, corruption, and his signature medicare expansion, there isn’t much to hang your hat on if you’re the Democrat incumbent.

It gets worse. This year, the GOP fielded two very capable candidates in Rispone and Abraham. Abraham is surging in polls with his affirmations of supporting President Trump and putting Louisiana first. Likewise, Rispone’s resilient campaign is on the verge of dropping a rumored $13 million in campaign ads later this month. With a shrinking lead, being out-fundraised and a failing narrative, it’s a matter of time until Louisiana has another conservative governor.

To go with his RV tour, Edwards is also dropping his first campaign ad of the 2019 cycle. The spot draws heavily on the fact Edwards’ predecessor Bobby Jindal continues to be unpopular, and blames Jindal for a fiscal mess Edwards inherited.

Here it is, @JohnBelforLA’s first campaign ad of the 2019 election season.

It’s a layup for attacks from Abraham and Rispone, for a number of reasons. First, the reason Louisiana’s projected deficit was $2 billion when Edwards took office was that he immediately demanded a giant ramp-up in state spending, exacerbating a fiscal problem that came about because of a recession in the oil patch. Edwards “solved” the budget deficit with massive tax increases which may have given a rosy tint to the finances of Louisiana’s state government, but that came at the cost of a stagnant, if not declining private-sector economy.

Louisiana’s GDP actually shrunk in 2016 and 2017, and in 2018 it grew at a paltry 1.1 percent. Along the way 68,000 more people moved out of Louisiana than moved in. And the state’s unemployment rate, which while better than it was in 2015 (that’s true of every state in the country save for Alaska), is still the highest in the south despite the outmigration soaking up a large number of people who might otherwise be unemployed.

If we’re to believe Edwards’ first campaign spot, his re-election message is that he wants credit for destroying Louisiana’s private economy in order to fund the largest state government in its history. And he’ll be all around the state this week pushing that message.

Forgive us for not expecting Abraham and Rispone to fear the fight ahead.