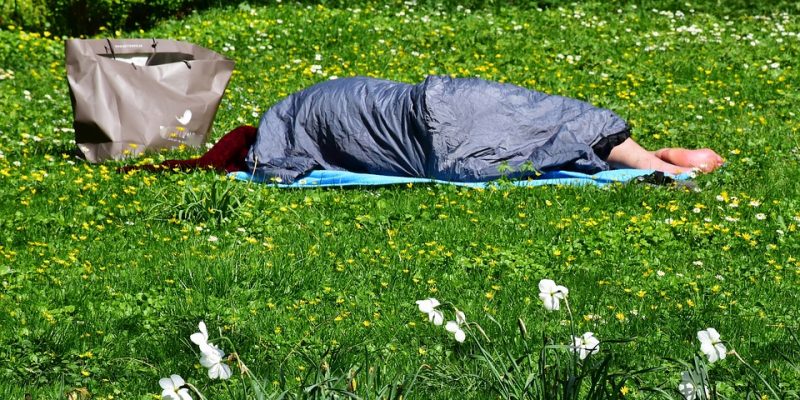 It is now legal for vagrants to camp on the front of your property in the capital city of Texas.

By contrast, renting that space to a homeless person for a month in Austin requires an annual fee of $500, proper insurance, a certificate of occupancy, and payment of hotel occupancy taxes (and for some reason a license to drive a motor vehicle).

A new homeless camping policy is the latest example of an all-Democrat City Council maintaining its war on private enterprise while giving those who do not pay property taxes more rights.

The brewing political battle in Austin just took center-stage with a tweet from Gov. Greg Abbott. 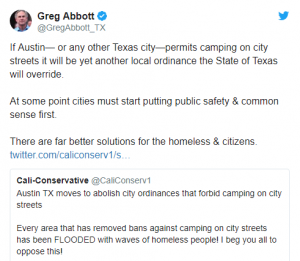 In the post, the Governor indicated his support for future legislation that would reverse the City of Austin’s infuriating decision to allow the homeless to camp pretty much anywhere in town, “on sidewalks, alleyways, and other public places (except parks and City Hall), which includes in front of your house, provided the people camping are not making the sidewalk unreasonably inconvenient or hazardous,” according to obviously dissatisfied Austin Police Association.

From the police union’s page:

It’s getting real! Governor Greg Abbott and President Trump are chiming in on this huge mistake.

Officers and citizens are reporting camps sprouting up all over town.

Officers are confused on how to enforce the changes.

Department direction is vague at best.

Free Austin Municipal Court Judges so they can drive to the scene to make decisions.

Angry citizens are uniting around the city! Democrat-Republican-Independent.

And earlier, the somewhat snarky but helpful public information post on where the homeless can camp:

Question: “People are sleeping on the sidewalk in front of my residence. This is concerning to my family. Can’t y’all do anything about that?”

Answer: No, the new obstruction/camping ordinances allow camping on sidewalks, alleyways, and other public places (except parks and City Hall), which includes in front of your house, provided the people camping are not making the sidewalk unreasonably inconvenient or hazardous.

You can always call 911 and ask for an officer to come by and see if a better outcome can be reached. Ultimately, concerns about the ordinance or suggestions for improvement should be routed to your city council member or the city manager. Their city contact info can be found here: http://www.austintexas.gov/contact-us
#QandAwiththeAPA

While complaints about tent cities and human feces has become a problem in large, liberal metropolises of late, they have been at his homeless utopia thing for longer and have made adjustments. Seattle has a ban on camping in public parks (Austin is ahead of the curve on this), San Francisco makes camping illegal, period, and Portland, Oregon, allows for camping everywhere but public property and rights-of-way.

Mayor Steve Adler responded to criticism by calling on the Governor to embrace the policy with the state as a “partner” in an innovative new approach.

Adler’s long-term goal may be found in his prepared response to concerned citizens: “We must focus providing temporary shelter, permanent supportive housing, and transition housing to serve the over 1,000 people who do not have a place to stay at night.” Adler’s solution also includes mental and physical health care for the homeless.

Related: In March, the city approved a contract with the Texas Department of Transportation to have city workers be responsible for the monthly pick up of garbage and debris left by homeless camps underneath about 60 overpasses and bridges owned by the state.

“The increasing number of people experiencing homelessness in Austin has resulted in a need for the state to transition the duties to the City, which is better equipped to provide outreach and services to the population at risk,” the press release read. “‘… Homelessness is an important issue, and these services are only a minor step in a much larger effort.’”

From the hip: You can see the strategy begin to unfold as part of this “much larger effort:” Make the hoi polloi uncomfortable with greater visibility of (and interaction with) an increasing homeless population and they will be more inclined to support public financing for homeless shelters and an array of services. Adler’s administration is already facing significant public backlash against a planned homeless shelter in South Austin so the status quo is not working for a radical push toward comprehensive services for the homeless. The Council knows this moment in the sun with no conservatives on the dais is rare, and they’re taking full advantage of the situation. Until this is resolved by clearer policy or at the ballot box, watch your step. This writer found himself dodging several sleeping bags during a recent jaunt of six blocks from the Texas Capitol to a pharmacy downtown on prominent Congress Avenue. Adler, at least in spirit, agrees that’s not a good place to camp.