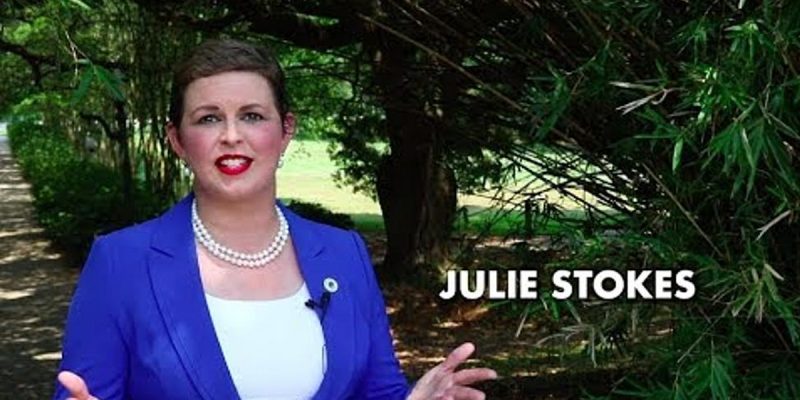 This wasn’t entirely unexpected, as it was bandied about in political circles that Stokes had lost the fire after getting bounced out of the Secretary of State race in the primary, finishing a disappointing fifth place with only 11 percent of the vote despite unloading several hundred thousand dollars of her own money.

After that loss, there was a bit of blood in the water where Stokes’ seat was concerned, and she’s drawn a Republican opponent in former Jefferson Parish prosecutor Debbie Villio. Villio, who ran for judge in 2010 but lost to Ray Steib, has past connections to Newell Normand and Aaron Broussard – but her campaign website doesn’t make much of that and our sources tell us she’s not that kind of Jefferson Parish politician…

Her 30 years of experience in public service and law have defined her as a scholarly and skillful professional. She’s served as an Assistant District Attorney, a Criminal Justice Director, a Code Enforcement Director, all the while sharpening her legal aptitude and preparing to draft laws of her own.

Frustrated by legislators who are more interested in climbing a political ladder than doing the job they were elected to do, Debbie Villio offers credentials to be a decisive, influential voice in Baton Rouge. She’s seen government waste first-hand, and she supports streamlining and cutting bureaucracy. She’s managed over 200 felony trials and that will give her insight into protecting victims, promoting public safety and finding a solution to an escalating opioid crisis.

Debbie helped rewrite the City of Kenner Charter, an action that will empower her to take the lead when drafting municipal laws. She led a domestic violence unit and trained law enforcement on how to manage and collect evidence in domestic violence cases, a practice that will help her champion women’s rights and fight abuse. She chaired a Crime Prevention and Reduction Task Force appointed by Jefferson Parish councilmembers, a duty that will inspire legislation to protect property and lives. She was 1st Vice Chair of the Children’s Bureau, training to give her foresight on passing legislation to care for our children.

For those of us counting on government to improve infrastructure, strengthen levees, build up flood protection and enhance drainage, Debbie will be a brainy, gutsy proponent who focuses on our needs and nothing else. Those who know Debbie best have no doubt that she’ll be able to play shrewd politics with the best of them. But the edge we deserve will come from her imposing devotion to detail, prowess in law, passion for perfection and an authoritative demeanor.

There was lots of talk that Villio was a decent bet to oust Stokes this fall even if she’d stayed in the race. That talk got louder on Friday, when Stokes posted this to her Facebook page…

It’s safe to say that wasn’t received with a maximum of joy from her following.

I knew that stepping into this role would require a great deal of sacrifice. As years passed, this sacrifice took the form of spending a large part of my time away from my family and my business, as well as not paying adequate attention to my health.  The dedicated time spent working toward a solution to our state’s budget problems and financial instability over so many sessions has taken a toll. Having spent the last month with my family and friends focused on reconnecting after a busy legislative session, I realized that I have not stopped to smell the flowers for at least seven years, and I do not want to miss any of the few years remaining with my children before they leave for college. Time is the one resource that we cannot get back, we cannot create more of – and we are certainly not promised tomorrow.

That is why I will not seek re-election in the fall.

I will never be able to adequately express the gratitude I have to the voters for their trust in me to serve. This has been one of the greatest honors of my life. While I will greatly miss serving the families of District 79, you can be assured that my quest to improve the lives of those in Louisiana, Jefferson Parish and the City of Kenner is not coming to an end. Although I will no longer represent our community in an elected capacity, my passion for making an impact will continue to flourish as I pursue a number of very exciting opportunities.  I look forward to regaining my strength and spending as much time as I can in the roles that cannot be delegated – that of mother, daughter, wife, and friend.  I am excited to get back to that journey and hope to share some of the moments of that life with those of you that I have been blessed to call friends and colleagues.

The past seven years of service would not have been successful without the wonderful staff of the Louisiana Legislature, especially the staff of the Ways & Means, Appropriations, and Health & Welfare Committees. I am grateful for their tireless work to help the people of Louisiana, and they do so with tremendous skill and dedication.  I also want to thank my legislative assistant, David Zoller, whose friendship and political wisdom have been an incredible asset to my career in the legislature and the district and the state as a whole.

I also want to thank my colleagues. It has been a joy to serve alongside you, and I consider you dear friends.  I hope to maintain close relationships with you and to be your greatest cheerleader.

Stokes’ legislative record was mixed. At times she was a good vote for conservative principles and at other times she was terrible. Mostly, her critics argued, the problems she had were with inside-the-rail dealings and worse, her willingness to go outside the House Republican Delegation. Specifically, there were accusations that Stokes served as a spy for the Edwards administration within that delegation and helped the governor get leverage in budget and tax negotiations, something which cost Louisiana taxpayers and its private sector economy billions of dollars over the last four years.

The electoral price to be paid for those actions was given a preview in last year’s Secretary of State race, and it could well have been paid in full in October with Villio, who appears to be a rather formidable candidate, already announced. But as of now that race won’t be taking place, and the question becomes whether Villio will be the sole qualifier in District 79.