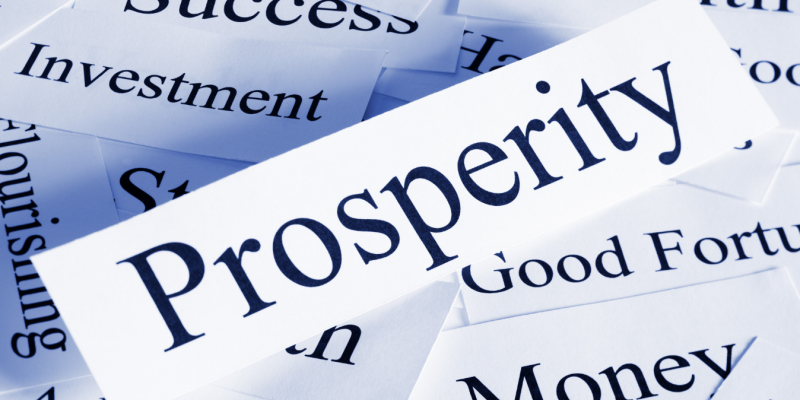 Americans living in the Northeast are still significantly more prosperous than those in the Southwest or Southeast, according to a new study published by the London-based The Legatum Institute.

A new United States Prosperity Index (USPI), made possible by the Leona M. and Harry B. Helmsley Charitable Trust, indicates that prosperity has increased nationwide over the past 10 years with the gap narrowing between the most and least prosperous states.

Despite this, five of the top 10 states are in the Northeast; nine of the bottom 10 are in the South.

Mississippi ranks 51, with Louisiana in 50th place. Massachusetts ranked first, followed by Connecticut and Minnesota rounding out the top three.

The USPI compared all 50 states and the District of Columbia in its state rankings according to 11 key factors (including health, education, crime, and social capital) with 48 subcategories (including mental health, primary education, discrimination and social tolerance) across 200 state-level indicators.

These range from crime data to the use of racial slurs to access to bank branches to political accountability and rule of law.

“Improvements in health, education and living conditions all contributed to the increase in prosperity,” the report states.

The research concludes that Washington, D.C. saw the greatest increase in prosperity over the past decade, followed by California and South Carolina. Only four states – Alaska, Louisiana, North Dakota and South Dakota – saw a decline in prosperity, according to the report.

Every region in the U.S. became more prosperous over the last ten years, showing signs of recovery since the Great Recession, with the Western region experiencing the most improvement.

Louisiana’s homicide levels are comparable to those of Panama and Uganda, the report notes. 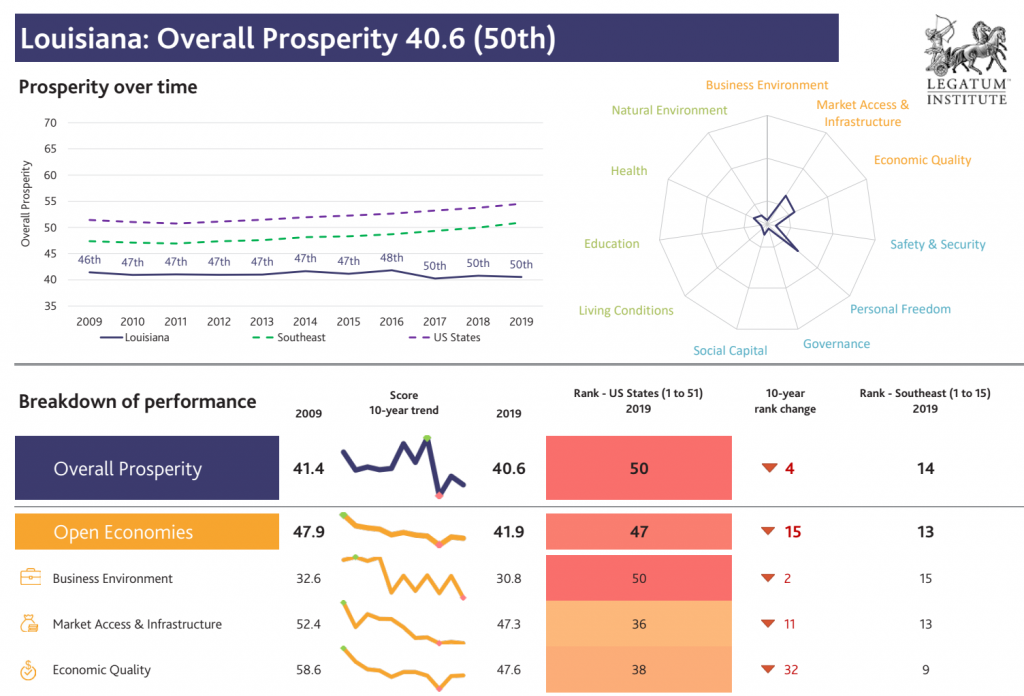 Nationally, the underemployment rate has decreased, as did Louisiana’s since 2009, but Louisiana has struggled to get people back to work, which has contributed to its higher unemployment rate. Louisiana’s employment rate is the highest in the Southeast, compared to a decade ago when it was lower, the report notes.

Louisiana’s youth unemployment of 12 percent “is also a challenge for the state,” the report notes, three percent higher than the wider region.

“These continual challenges affecting the workforce indicate that Louisiana has struggled to recover following the financial crisis,” the report states.

Year-on-year improvements since 2015 resulted in 46 states and the District of Columbia exceeding their 2009 levels for labor force engagement.

Even by 2018, only 11 states had recovered their material resources to 2009 levels, and by 2019 this had only increased to 14 states, which the institute says indicates a lag between improvement in labor force engagement and material resources.

Massachusetts ranked first for elementary education and second for secondary and tertiary education. It also ranked second for business environment and was among the top three states for governance, personal freedom, and the natural environment.

The most prosperous state in the Southwest is Arizona, which ranked 37th. Other Southwestern states ranked 38th, 43rd and 46th.

While Texas received an overall rank  of 38, it placed third in economic quality due to a high rate of entrepreneurs and startups coming to the state.

The weakest performing state in the Northeast is Pennsylvania, which ranked 25th.

Interested in more national news? We've got you covered! See More National News
Previous Article Help Us Stop The Louisiana Board Of Pardons From Letting A Vicious Murderer Go Free
Next Article Reports Of ‘Backdoor Meeting’ With Speaker Could Expose Rift In Texas House Leadership