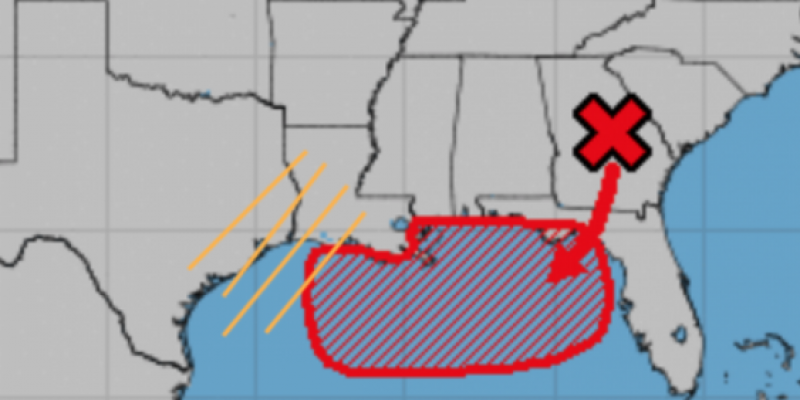 “We don’t have to wait until the rain falls for the rivers to fill up because they’re already full,” Edwards said at a press conference. “There are three ways Louisiana floods: Storm surge, high rivers and rain. We’re going to have all three.”

Called “Tropical Storm Barry,” it has turned slightly to the east since Wednesday and is now projected to make landfall in south-central Louisiana near Morgan City as a Category 1 hurricane. The storm is expected to drop 10 to 15 inches of rain on most areas of the state, maybe more in some areas.

The heaviest rainfall is expected Friday through Sunday morning, with a storm surge threat for all of south and southeast Louisiana.

“This will be the first time that we’ve had a hurricane make landfall in Louisiana while the Mississippi River was at flood stage,” Edwards said. The river has been elevated for 258 days– a record.

“Whether it comes from rain or the river, water is water,” Edwards said. “We are encouraging everyone to take this very, very seriously.”

Voluntary or mandatory evacuations have been declared for parts of Calcasieu, East Feliciana, Jefferson, Lafourche, Vermilion and Plaquemines parishes and the city of Grand Isle.

Up to 3,000 Louisiana National Guard members are authorized to mobilize, many are assisting in levee operations and evacuations. State search-and-rescue vehicles have been positioned to assist in possible evacuations after the storm.

The Department of Transportation and Development has shifted its motorist assistance patrol into 24-hour operations, with 110 buses to assist in evacuations in place tomorrow.

Government leaders urge motorists not to attempt to drive through standing water.

Information about road closures can be found at emergency.la.gov and 511la.org.

For information about shelter availability, call 2-1-1.

Interested in more national news? We've got you covered! See More National News
Previous Article A Note To Stephanie Grace: Bobby Jindal Isn’t Running This Year
Next Article Nothing like a White House scuffle in the Rose Garden [videos]