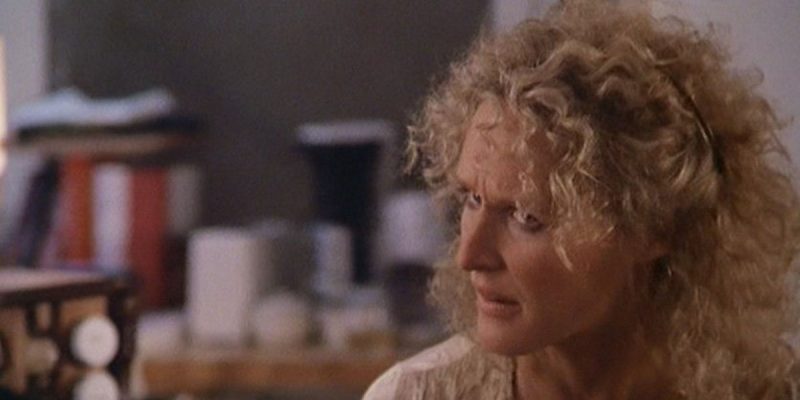 Maybe we should call her Stephanie “Bad Penny” Grace, since for the poor people of New Orleans who thought they were rid of her when she was fired by the Times-Picayune she keeps turning back up. The Baton Rouge Advocate snapped Grace up when John Georges bought that paper, and she’s been reinserted into the media bloodstream in New Orleans despite a lack of evidence anybody other than Georges and John Bel Edwards is interested in what she has to say.

And what Stephanie Grace has to say usually includes a reference to Bobby Jindal, who has all but disappeared from Planet Earth since his second term ended nearly four years ago. It’s an obsession which might have been defensible when Jindal was still in office or even for a year or two afterward, but now that it’s the summer of 2019 and Grace is still writing columns about Bobby Jindal it’s long past the time where she comes off as Glenn Close boiling bunny rabbits on the stove.

From the latest “I won’t be ignored, Dan” missive from Grace within the pages of Georges’ Advocate-cum-Times-Picayune fish-wrap…

Gov. John Bel Edwards is running his opening campaign ad of the season — in heavy rotation on air and online, his staff points out — and the very first face all those viewers will see is former Gov. Bobby Jindal’s.

Hey, there’s something to be said for sticking with what works.

Edwards’ unlikely victory in 2015 had much to do with his runoff opponent David Vitter’s shortcomings, but it surely wouldn’t have happened if Louisianans hadn’t been ready for a big change after eight years under Jindal.

Jindal had started off strong and immensely popular, but by the end he and a compliant Legislature had made deep cuts to higher education and health care, drained the state’s financial reserves and dug a deep budget hole, all while he spent much of his time courting the early state presidential vote in Iowa and New Hampshire. A poll taken by the University of New Orleans just before the 2015 runoff pegged his approval rating at 20 percent.

He wasn’t on the ballot against the centrist, plain-talking Democratic state rep from Amite, but he might as well have been.

This time around, Edwards is facing a pair of so-far lackluster Republican challengers, U.S. Rep. Ralph Abraham and businessman Eddie Rispone, but he clearly hopes the comparison to Jindal still resonates.

“Four years ago, Bobby Jindal left Louisiana in crisis,” the ad’s narration begins, as Jindal smiles. After a series of damning headlines and news snippets, the story line shifts to Edwards and a recently brightened picture that includes full funding for services previously cut, a teacher pay raise and a $300 million surplus. While there’s still work to do, the narrator concludes, “Governor Edwards is leading Louisiana in the right direction.”

Grace then goes through some contortions which give off a similar “what is this crazy woman doing?” vibe as a certain Roller Coaster scene does in a certain movie by attempting to say Republican lawmakers did Edwards a favor by fighting him on tax increases as long as they did, because if they’d just rolled over back in 2016 without making a fuss over Louisiana being the only state in the South raising taxes (while performing worse than its neighbors economically) nobody would be mad at them.

You can read that part for yourself and try to make sense of it. We gave up – it was unintelligible to us.

Yes, John Bel Edwards is running against Bobby Jindal. This is unmistakable. Just check out the web banner Edwards’ campaign is splashing across the internet this week. 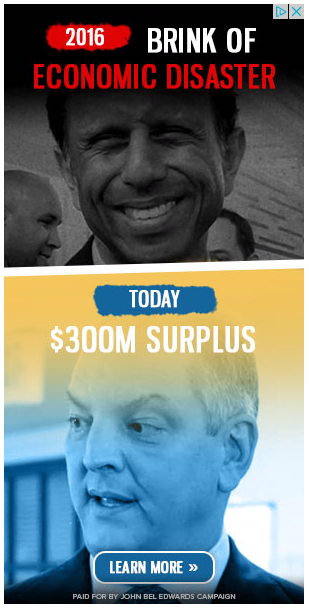 Remember when it was raaaacist to darken the image of people who were black or darker-skinned? We haven’t forgotten. But that’s a rich subject involving Edwards for another time.

The fact is that Bobby Jindal stopped being relevant in Louisiana politics before he was even out of office. Anybody who follows events at the Capitol could tell you that. And the idea we’re going to drag Jindal back into the limelight and relitigate his time in office this fall is just plain stupid.

Do you think anybody on the Republican side has a brief for Bobby Jindal or thinks he’s worth rehabilitating as a standard-bearer for Louisiana conservatism? Does anybody think this other than the hack consultants on Edwards’ payroll looking for an easy narrative they can sell to the Stephanie Graces of the world?

Here’s the truth about Jindal. He got it in his head, just after the Anderson brothers out of Washington, DC set their hooks in him, that he could ride the national Republican Party’s desire to find candidates who were “diverse” into a position of prominence as a presidential candidate – that maybe if he couldn’t get the nomination in 2016 he’d get far enough that he’d be able to merit a VP slot or a good cabinet post. The problem being that he had most of his second term still to go as Louisiana’s governor, and he’d left a huge amount of reform on the table.

So Jindal abandoned the fight to get Louisiana out of 50th place and went off to South Carolina, Iowa and New Hampshire trying to make his presidential ambitions a thing. And while he got some play in some of the national conservative media organs, there was nary a voter in those primary states who gave a tinker’s damn about him. Meanwhile Republicans in Louisiana were disgusted at his failure to run out any ground balls with respect to his then-current job, and there was the lingering stench of Jindal’s stupid feud with Vitter that tore the state GOP asunder.

And Jindal did everything he could, in pursuit of that feud, to wreck Vitter’s 2015 campaign. He pulled out of the presidential race in late 2015 just in time to steal Vitter’s headlines and he backed Scott Angelle’s sad-sack, hopeless and destructive 2015 race against Vitter. Angelle was so shameless in his attempts to drag Vitter down that he actually went on statewide TV selling as truth a crazy left-wing blog post accusing Vitter of killing a hooker on a houseboat in Biloxi some 12 years hence; Jindal never repudiated that sleaze. Voters repaid it by bringing Clay Higgins to Congress in a landslide over Angelle the next year. Jindal is so little a factor in Louisiana politics that he doesn’t even make the speaking circuit in the state anymore and he hasn’t endorsed a candidate in so long we can’t even remember the last one.

Which means nobody cares about Bobby Jindal anymore. And if the argument from the Edwards camp, of which Grace is clearly a member (maybe she’s in charge of making the rabbit stew in the clubhouse), is that Bobby Jindal is terrible, the response is an overwhelming “Yeah, so?”

Because agreeing that Jindal stunk as governor, particularly in his second term, hardly makes John Bel Edwards look good. Edwards, after all, was in the legislature all eight years Jindal was governor, and Edwards voted for six of the eight budgets passed during Jindal’s time which created the “brink of economic disaster” Edwards keeps babbling about. And if you really want to compare economic performance numbers between the two Edwards doesn’t exactly blow Jindal’s doors off – the state’s economy didn’t shrink under Jindal like it has two years out of the three in Edwards’ term that we have numbers for, and Jindal didn’t have the disastrous outmigration numbers Edwards has brought to us.

So if Edwards, and Grace, want to say that electing Ralph Abraham or Eddie Rispone would be tantamount to bringing Bobby Jindal back, let them try. All Abraham and/or Rispone need to say is “Hey, I thought Jindal sucked, too – at least until I saw the job you’ve done.”