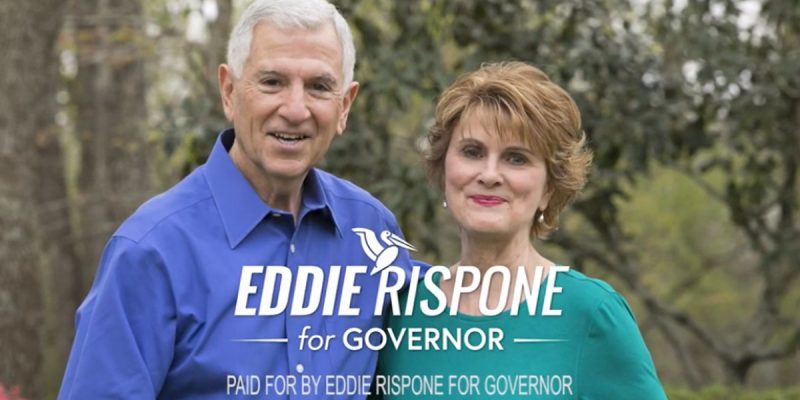 Today, the Eddie Rispone for Governor campaign released the second video in their web ad series. The latest 30 second video titled, It’s Time to Drain the Swamp, highlights Eddie’s position as the conservative outsider in the race. As an outsider, Eddie is not beholden to special interest groups or career politicians and will only do what is best for all Louisianans.

Eddie Rispone added on the video release, “Louisiana has been ranked dead last because of John Bel Edwards and his special interest groups. It is time that Louisiana had a conservative outsider, like President Trump, who has the backbone to take on the status quo, and end the cycle of career politicians.”

And here’s the spot…

The thing about this that we’re not sure about is that the more Rispone talks about emulating Donald Trump, the more he reminds people that he’s not Trump.

Policy-wise he’s close, but to be honest the primary – and especially the competition for the Republican spot in the runoff between Rispone and Ralph Abraham – will not be about policy. When you accept as truth that John Bel Edwards cannot and will not get to 50 percent in October and that there will be a runoff between Edwards and either Abraham or Rispone, you begin to realize that the runoff is going to be the time to talk about policy.

The primary, especially between Abraham and Rispone, is the time to talk about branding and personality. Who do Republican voters want as their candidate to beat Edwards in November?

Rispone’s personal story is a good one. He’s a North Baton Rouge kid made good – a working-class guy who parlayed a Catholic education and a killer work ethic into building a world-class industrial construction firm and a wife, kids and grandkids Louisianans would be very proud of as its first family. But what Eddie Rispone is not is Donald Trump.

Yes, he’s a successful businessman who isn’t beholden to the usual rules and alliances politics forces on more traditional candidates. That part is a given. But why Trump was able to make that work was that Trump was a TV star before he ran for president. Trump was a showman. You couldn’t get in a war of words or personalities with Trump, as the 16 other Republican candidates in the 2016 primary found out, because he would suck all the oxygen out of the room by coming up with a funny nickname to demean you – and then beat you down by harping on whatever embarrassing moment you might have had that everybody knows about.

For all of the policy success that Trump has had, and he’s definitely had that – and moreover, Louisiana could certainly use somebody coming in as governor who could smash every special-interest rice bowl at the Capitol to bits – the key to Trump’s political successes despite the virulence of the opposition to him is that Trump is simply more entertaining than anybody else in American politics.

Which is why we’re just not sure that Rispone is going to hit his stride comparing himself to Trump. Doing so confers expectations that almost nobody in politics can meet, much less somebody who’s done real work for a living rather than host a reality TV show for the last decade before getting into politics.

As to the substance of the ad, it’s great. This state needs some swamp-draining in almost every way it could be described, and Rispone can make a great case for himself as not beholden to the swamp-dwellers – in fact, he’s spent a great deal of money as a campaign contributor over the past several years attempting to get at that problem before deciding to get down into the muck himself.

We’re just believers that if you really want to assume the Trump mantle, you’ve got to channel your inner P.T. Barnum the way Trump can. Rispone either has to figure out how to do that, or he needs to go about this message a little differently. Maybe he could pick up on Newt Gingrich’s old narrative about how there’s the world that works, meaning the private sector where the market punishes sloth, incompetence and waste, and the world that doesn’t, meaning the dysfunctional governmental systems which actually run on sloth, incompetence and waste (not to mention theft), and cast himself as the man from the world that works and thus the only one with a chance to fix the world that doesn’t.

That would be highly believable, because Rispone’s clearly successful in that world. And politically the only avenue to discredit him would then to attempt to point out places that ISC Constructors failed. Good luck there – they’re known as one of the best industrial construction firms in the world.

The good news is that Rispone has lots of resources with which to adjust his message in order to find that sweet spot where he calls down the echoes of Trump’s 2016 campaign without inviting people to ask why he isn’t as funny and engaging as Trump is. As to time, well, it’s still early in the campaign. By the end of July, though, a major candidate for governor is going to want to have settled on a branding strategy and a message he’s ready to fight on. We’ll have to see if this one is right for Rispone.