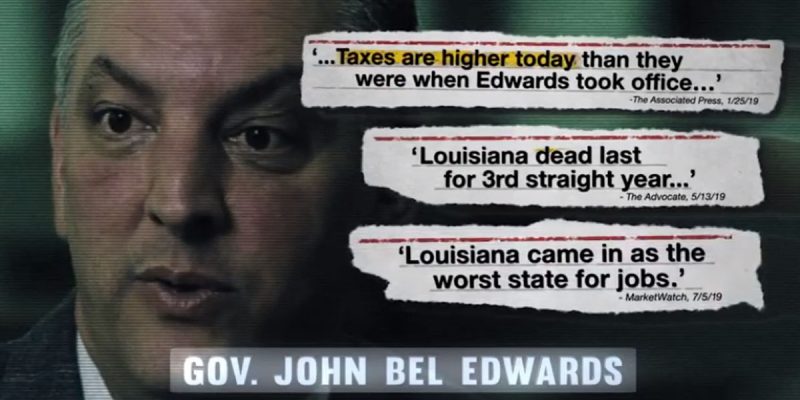 At this point, following several elements of it being pushed out by the Ralph Abraham camp over the course of the early stages of the 2019 Louisiana gubernatorial campaign and the web ad released earlier this week by Eddie Rispone’s camp, and again with the Republican Governors’ Association’s spot which hit yesterday, we know what the message will be from the Republican side as the RGA and the candidates attempt to unseat John Bel Edwards this fall.

That is, while Edwards is attempting to take credit for putting Louisiana’s fiscal house in order by balancing the state’s budget after inheriting what he said was a big deficit, what he’s actually done is rob the state’s economy blind and leave our private sector destitute – and we have unemployment, government dependency and outmigration of our productive people as the product to show for it.

There are a number of ways to deliver that message. Rispone’s web ad talks about how the Trump economic boom is elevating all of Louisiana’s neighbors while the Bayou State falls further and further behind. Abraham says Edwards “has turned failure into an art form.” And then there’s the RGA’s spot which will be all over the tube in Louisiana over the next several weeks…

It’s more or less all the same message, and what it lacks in novelty it makes up for in truth. Every time a retail establishment or restaurant closes in your neighborhood, or a house goes up for sale because its owners are moving to Texas for a better life, or there’s a meth-head who steals a truck and kills the dog riding inside it because hopelessness has set in among our worst citizens, people can easily see this is a state which is not better off for having a massive and astronomically expensive state government with a budget $10 billion larger than it was when John Bel Edwards took office.

Style has always counted more than substance in Louisiana politics, though, and it has never really mattered whether the substance is true.

We don’t hate this RGA ad. It’s a decent pushback to Edwards’ self-congratulatory spot which has begun airing across the state, in which he claims Louisiana was in a $2 billion budget hole and is now in such awesome shape that it’s raising teacher salaries. And according to the AP’s story on the ad, the RGA is essentially going to match Edwards’ campaign spend for this round of the ad wars…

A day after Louisiana Gov. John Bel Edwards launched the TV campaign for his re-election bid, a Republican group responded Tuesday with its own advertising to attack the Democratic incumbent’s performance.

The Republican Governors Association said its first 30-second TV spot of the governor’s race, financed by its political action committee, will run statewide on broadcast and cable television. RGA spokeswoman Amelia Chassé Alcivar described the ad buy to The Associated Press as in “the mid-six figures,” enough to run for several weeks.

With the pair of releases, the gubernatorial competition is intensifying, with an onslaught of advertising expected until Election Day on Oct. 12.

The RGA ad seeks to counter that message by juxtaposing Edwards’ support of tax hikes to balance the budget with the tax cuts championed by President Donald Trump. The GOP organization says the tax increases are chasing workers from Louisiana, citing recent population losses.

The word is the RGA is planning to spend somewhere between $7 million and $10 million on the Louisiana governor’s race. The hope and expectation here is that this spot is designed to simply soften Edwards up for more pointed attacks on the same line as the campaign goes along.

As for Rispone and Abraham, who are both going to have a similar theme to their pitches to voters, it’s possible whichever one can craft the more colorful way to drive home the point that Edwards is stealing our money and setting it on fire could be the governor’s runoff opponent – and eventual winner of the race.