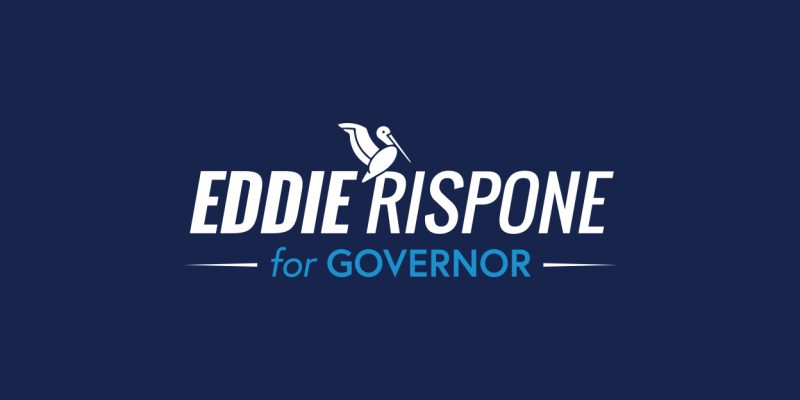 Here’s a press release from the Eddie Rispone gubernatorial campaign…

Today, the Eddie Rispone for Governor campaign released the first in a series of web ads that will be promoted across a variety of channels and platforms. The 30 second video titled, Eddie Stands with President Trump, highlights his outspoken and longstanding support for the Trump agenda.

Eddie Rispone on the video release added, “While the rest of America is thriving under President Trump, Louisiana is dead last because of the failed leadership from liberal John Bel Edwards. President Trump cut our taxes, but Edwards raised them by billions. Louisiana needs a conservative outsider and businessman like President Trump to turn this mess around.”

And here’s the 30-second spot, which we’ll assume will eventually be on TV as part of Rispone’s ad campaign which is only a few days away from getting cranked up…

A couple of items of note here, at the risk of belaboring the obvious.

First, Rispone’s tag line for his campaign is “conservative – outsider – businessman,” which spells Trump in every way it possibly could. It’s a similar approach to the one Bill Lee won the governorship in Tennessee with last year, and Lee’s consultant Jordan Gehrke is a major driver of Rispone’s campaign. So you don’t mess with success based on Trump winning in 2016 and Lee last year.

And obviously Rispone having never run for anything before this is a very natural message for him.

But the other bit of relevance to this is as a counter to John Bel Edwards’ message, which Juan Howard talked about earlier today here at The Hayride. Edwards is trying to take credit for what he says is Louisiana’s killer economic performance, a message which is something of a dog’s breakfast conflating Louisiana’s massive budget increase with economic prosperity, and attempting to ride the coattails of Trump’s economy.

To the low-information voter, Edwards’ self-congratulatory message might resonate. Louisiana’s GDP is actually growing, if only a little, and the state’s unemployment rate is down and personal income is ticking up, a little.

The problem is that compared to other states around the country, where Trump’s economic boom is creating real prosperity along the lines of what Rispone talks about in the ad, Louisiana’s performance is nothing short of putrid.

The Pelican Institute had a blog post a week or so ago looking through some economic numbers from the Bureau of Labor Statistics, and the facts don’t support Edwards’ re-election message at all.

Perhaps the most deceiving number in these reports is Louisiana’s 4.4 percent unemployment rate. While this rate may seem satisfactory in a vacuum, more context shows the state of Louisiana’s economy is not as rosy as some claim.

While the unemployment rate is a reasonably good topline indicator, the real question is “are more people working in the state of Louisiana than last month”? That answer is disappointingly no. In April 2019, the total number of nonfarm payroll employees was 1,983,200.  In May, that number decreased to 1,982,800. That’s a decrease of 400 people with a job. Since March, 1,700 fewer people have a job.

Another important measure of the health of a state’s economy is the civilian labor force, or those over 16-years old who are employed or are looking for work. A strong economy will often pull people off the sidelines, causing them to look for work and join the civilian labor force. Similarly, a state with people migrating to it in search of jobs and opportunity will also cause this number to rise.

Conversely, a weaker economy will cause people to drop out of the civilian labor force with a sense of defeat feeling as if they cannot find a job no matter how hard they look. This result will lower the unemployment rate, but not for good reasons.

This is part of a more troubling trend in the Pelican state. Since its high point in November 2014, the civilian labor force in Louisiana has declined by more than 91,000, with no change in the overall trend.

Indeed, the drop in this number both explains Louisiana’s’ recent population loss and a significant drop in the state’s unemployment rate. Hardly a sign of a stellar economy.

And a little bit more…

But looking at the national numbers is also important to fully understand economic trends. Louisiana’s 4.4 percent unemployment rate remains the 7th highest in the nation and higher than all of its geographic neighbors other than Mississippi.

Examining the longer 10-year trend, for the last five years, Louisiana’s unemployment rate has been higher than the national average by approximately one full percentage point. This is still the case as the current U.S. unemployment rate sits at 3.6 percent.

But what about Louisianans who do have jobs? How are they faring during America’s economic boom?

The Bureau of Economic Analysis provides some clues as they examine the earnings of workers around the nation every quarter.

Some have highlighted in this report a 4 percent increase in personal income, or all money received including government benefits, during the first quarter of the year. Even though this 4 percent still falls behind the 4.2 percent Southeast average, Louisiana does fairly well in this category compared to its neighbors.

This means when it comes to the wages people are bringing home, Louisiana still has a lot of catching up to do.

There are other numbers out there to indicate just how devastatingly poor the state’s private sector economy is doing at present. For example, the BLS’ year-over-year employment growth numbers show that while Louisiana’s neighbors are adding jobs at a fast clip the state is completely stagnant.

Specifically, over the past year…

So of nine markets in the state, you have four which saw an actual loss of jobs, totaling 8.9 percent in job losses, and four which grew by a combined 3.3 percent, and then there was Baton Rouge which was absolutely stagnant.

Remember that Louisiana’s economy supposedly grew by 1.1 percent in 2018. If that growth, which would pick up a little less than half a year of the BLS’ recently-released numbers, is at all accelerating you’re talking about a jobless recovery in Louisiana if there is recovery at all.

And it doesn’t bode well that while Lake Charles, which has been the hottest economy in the state for the past 4-5 years, is still positive over last year the job growth there is less than half a percent. What that tells you is the industrial construction boom which has fueled the Lake Charles market has begun to peter out and Edwards, who has been Louisiana’s governor for long enough that he should have his own economic development wins beyond the things left over from his predecessor’s administration, has not kept the pipeline full.

And of course he hasn’t. He’s killed the ITEP program, which used tax incentives to generate economic development projects Louisiana would otherwise be unable to compete with Texas and other states for. So now that all of the big plants Bobby Jindal’s economic development team landed for Lake Charles have been built, the boom is over.

And by the way they still don’t have a new I-10 bridge in Lake Charles, and they’re hoping President Trump wins re-election and fulfills his promise to build it before the current one falls into the lake.

But wait, there’s another economic development failure to talk about. If you’ll check out the National Venture Capital Association’s 2019 yearbook, which gives a state-by-state look at the state of investment capital available to startups and business expansions – something that isn’t a perfect measure of the health of a state’s economy but it definitely can give a window into whether investors see a state as an economy worth playing in – you’ll find something nasty on page 18.

Which is that the total amount, in dollars, of venture capital assets under management in Louisiana is in absolute free fall since John Bel Edwards took office. That number in 2015 was $569.95 million in 2015, which was down from $598.93 million in 2014 – an indication of the statewide recession sparked by the downturn in oil prices and the negative effect on jobs and capital in Louisiana’s oil patch at that time.

But with Edwards as governor, that number has continued to plummet. In 2016, VC assets under management fell to $453.26 million, and in 2017 things got much worse – the AUM figure was $290.22 million. And last year Louisiana’s number was $259.67 – less than half of what it was not just in Jindal’s last year in office, but less than half of what it was in 2005 before Katrina hit the state.

So there are frighteningly ugly indicators all over the place out there showing that the private economy in Louisiana is flat on its back amid a national economic boom. And Rispone’s message indicating that the policies that created the Trump economy nationally ought to be duplicated here at the state level should be an effective one.

We’ll see if this ad, and the follow-on ads the Rispone campaign pairs with it, move the needle. They should – at least to further soften Edwards’ support.